London may be moving beyond the peak of the omicron variant 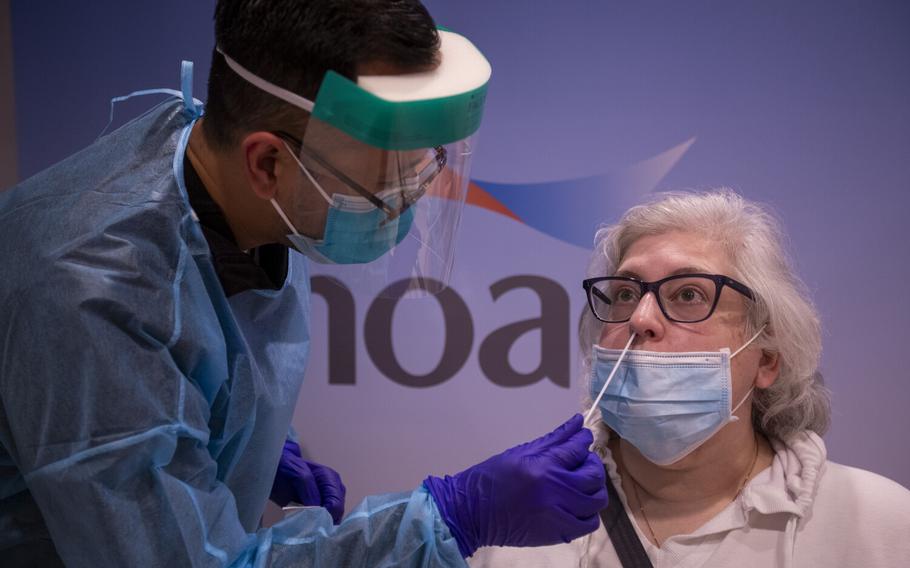 Reports of new cases in London have been plateauing and admissions to the city’s hospitals have been slowing, according to official tallies. While admissions were growing by as much as 15% a day in late December, they dropped to 5% increases over the New Year’s weekend, and are now growing at just 1 and 2%. (Allen J. Schaben, Los Angeles Times/TNS)

LONDON - Early evidence suggests the British capital may be past the worst of the highly transmissible omicron variant, beginning to move beyond a peak that was lower than some models predicted and has remained manageable for hospitals.

Reports of new cases in London have been plateauing and admissions to the city’s hospitals have been slowing, according to official tallies. While admissions were growing by as much as 15% a day in late December, they dropped to 5% increases over the New Year’s weekend, and are now growing at just 1 and 2%.

That data comes from Chris Hopson, chief executive of NHS Providers, the umbrella organization for the National Health Service trusts in England and Wales that run 90% of the hospitals.

“For the moment, we can probably say London appears to be over the worst,” Hopson told ITV’s “Good Morning Britain” on Tuesday.

Britain as a whole is still in the thick of it. Cases are still surging outside the capital, where the wave appears to lag two to 10 days behind London.

“The United Kingdom is in the midst of the fastest growth in covid cases that we’ve ever known,” Prime Minister Boris Johnson said at a news conference Tuesday, urging continued caution.

But the peak in Britain and in the United States shouldn’t be far off, health officials say, and the pattern in London suggests that, as in South Africa, it should move through faster than in previous waves.

“We have a chance to ride out this omicron wave” without further restrictions or lockdowns, said Johnson, who for weeks has resisted calls for stricter measures.

Besides making a big push for boosters, he has recommended that people work from home if they can, wear masks on public transportation and test themselves before meeting vulnerable people. But the government has not shut down schools, pubs, restaurants or entertainment venues.

Hopson wrote in a long Twitter feed on Monday that: “London hospitalization data remain very important as they went into this omicron peak first and will therefore emerge first.”

He noted the potential for case numbers to rise again, as the effect of New Year’s celebrations and school returns are felt. But he called the slowdown in London admission rates “encouraging.”

Patrick Vallance, the nation’s chief scientific officer, was more hesitant to say that London was over the worst.

He noted that case numbers may be dropping for teens and younger adults, but the older population in London is still seeing rising infections - and that is the group most likely to get seriously sick.

“So I think it would be very wrong to suggest that there’s a peak, which means it’s all over in London,” he said. “We need to keep watching. We don’t know when the peak is going to happen or how big it will be.”

British health officials are in agreement that so far the omicron variant appears to be resulting in less-severe illness, bolstering previous reports from South Africa.

Vallance said the variant itself may cause less-serious illness, while vaccine doses improve protection.

Across England, hospital administrators are reporting far fewer elderly patients in their wards than in previous waves. Occupancy of beds in intensive care units, the number of patients on ventilators, and deaths have remained stable since August, even as new daily cases have doubled from earlier peaks.

“We are not seeing a surge in mortality,” Chris Whitty, the government’s chief medical officer, said Tuesday. He said booster shots are offering 88% protection against hospitalization.

Hospital administrators say their biggest challenge isn’t a wave of sick and dying patients, but staff shortages. Ten hospitals in England have announced “critical incidents,” declared when health administrators fear they cannot provide crucial services because of severe personnel shortfalls, spurred by doctors and nurses isolating at home because they themselves are infected.

Observing the hospital admissions data and infection rates, the disease modeler who helped design Britain’s lockdown strategy said Tuesday that he was “cautiously optimistic” that new infections have plateaued in London and could begin to drop next week.

Neil Ferguson, an epidemiologist from Imperial College London, told BBC Radio, “An epidemic reaching such high numbers can’t sustain those numbers forever. So we would expect to see case numbers start to come down in the next week, maybe already coming down in London, but in other regions a week to three weeks.”

Ferguson, who is often criticized by opponents of lockdowns for his worst-case scenario forecasts, added, “I’m cautiously optimistic that infection rates in London in that key 18-to-50 age group, which has been driving the omicron epidemic, may possibly have plateaued. It is too early to say whether they’re going down yet.”

Ferguson and others have cautioned that the number of new infections may be undercounts, because the British government has struggled to keep up with demands for testing kits.

Hopson said it was “striking” that when NHS hospital administrators were asked what they were most worried about a month ago, when omicron first appeared in Britain, they said a wave of elderly patients.

“That’s what we saw last January, when we had 34,000 simultaneously hospitalized covid patients,” he told ITV. “The interesting bit is every single chief executive I’m speaking to is saying they’re not seeing those large numbers of seriously ill older people.”

Hopson tweeted, “London should be able to cope this week. But we need to recognize that ‘coping’ underplays the degree of pressure trusts and their front-line staff are under.”