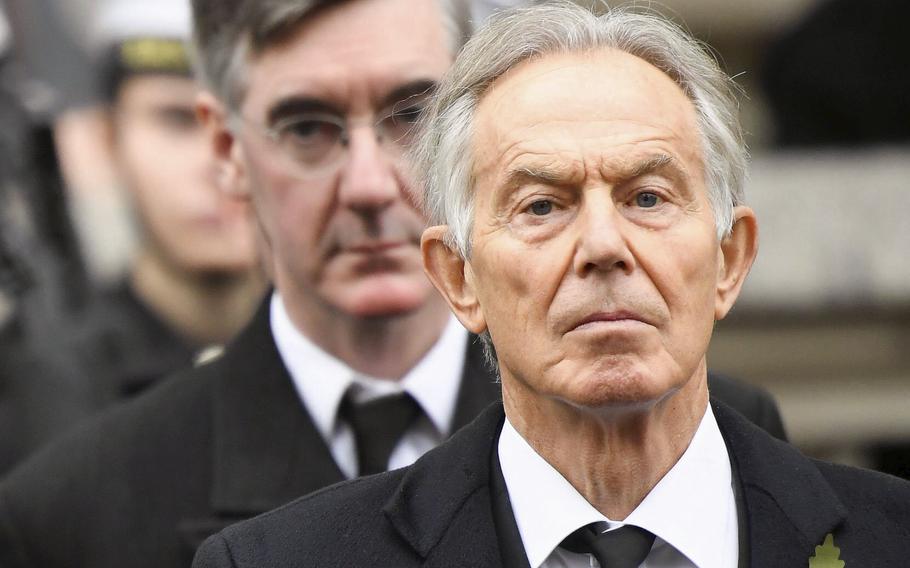 Former Prime Minister Tony Blair, right, attends a service at the Cenotaph, in Whitehall, London, on Nov. 14, 2021. Queen Elizabeth II on Saturday, Jan. 1, 2022, appointed Blair to be a Knight Companion of the Most Noble Order of the Garter, the most senior order of knighthood. (Toby Melville/Pool via AP)

Separately, Queen Elizabeth II appointed former Labour Prime Minister Tony Blair to be a Knight Companion of the Most Noble Order of the Garter. It's the most senior order of knighthood, with appointments made entirely by the monarch, without advice from the prime minister.

The list of 1,278 honors published late Friday reflected how much Covid-19 has dominated the past 12 months. The chief medical officers of Wales and Scotland received awards alongside Whitty for England, as did Jenny Harries and Jonathan Van-Tam. Both appeared regularly on the government's televised pandemic briefings. Charity fundraisers and workers also featured on the list.

Nearly one in five honors were for Covid-related service. Recipients are often proposed by members of the public, then vetted by the government and approved by the queen.

Johnson has faced intense criticism during the pandemic, from a perceived delay in ordering the first lockdown in March 2020 to bottlenecks in testing. He's also not always followed the advice of his scientists, and has promised a public inquiry in the spring to look at his government's response.

Johnson's health advisers are now public figures in their own right, and some, like Whitty, have gained a cult-like following. Whitty was granted a knighthood and can now use the title, "Sir." Vallance, who was knighted on the 2019 list, was elevated to Knight Commander of the Order of the Bath, alongside Whitty.

Harries, who heads the U.K. Health Security Agency, received a damehood, as did June Raine, chief executive of the Medicines and Healthcare products Regulatory Agency. Van-Tam, England's deputy chief medical officer, who has become well known for his use of train analogies to describe the state of the pandemic, received a knighthood.

James Bond star Craig, who has played the iconic British spy in five movies including 2021's "No Time To Die," was made a Companion of the Order of St Michael and St George (CMG). The honor is typically given to diplomats, and was also held by the 007 character in Ian Fleming's books.

Actress Joanna Lumley, known for her role as Patsy Stone in the comedy "Absolutely Fabulous," was made a dame for services to drama, entertainment and charitable causes.

Gold medalists at the Tokyo Olympics were rewarded, including cyclists Jason Kenny and Laura Kenny. The married couple, who between them have won 12 Olympic golds, received a knighthood and damehood, respectively. Tom Daley was made an Officer of the Order of the British Empire (OBE) for services to diving, LGBTQ+ rights and charity.

Raducanu, who stunned the tennis world with her New York Open victory in September at age 18, becomes a Member of the Order of the British Empire (MBE).

No players from England's soccer team, which reached the final of the European Football Championship for the first time, made the list. The team's assistant manager, Steve Holland, received an MBE.

In the business world, du Plessis -- the government's preferred choice to chair the U.K.'s accounting watchdog -- receives a knighthood for services to the telecoms industry, having overseen BT's fiber broadband rollout.

Nick Owen, the former chairman of auditing firm Deloitte U.K., received a CBE, while Bina Mehta, KPMG U.K.'s current chairman, got an MBE "for services to trade and investments in the U.K. and female entrepreneurs."

One of the most exclusive awards was given to former Labour MP Frank Field, now a cross-bench peer in the House of Lords. He was made a Companion of Honour, a category limited to just 65 people at any one time, for his public and political service. Other current members include author J.K. Rowling, artist David Hockney, and the former Beatle, Paul McCartney.

Blair's appointment comes more than 14 years after leaving office. Most of his predecessors were named within a few years of stepping down. Prime minister for a decade, he remains a polarizing figure in the U.K. for his support of the U.S.-led war in Iraq.

MBE: Comedian Adam Hills, host of Channel 4 "The Last Leg" show, for services to Paralympic sport and disability awareness. Melanie Brown, the former Spice Girls singer known as Mel B, for her work against domestic violence.