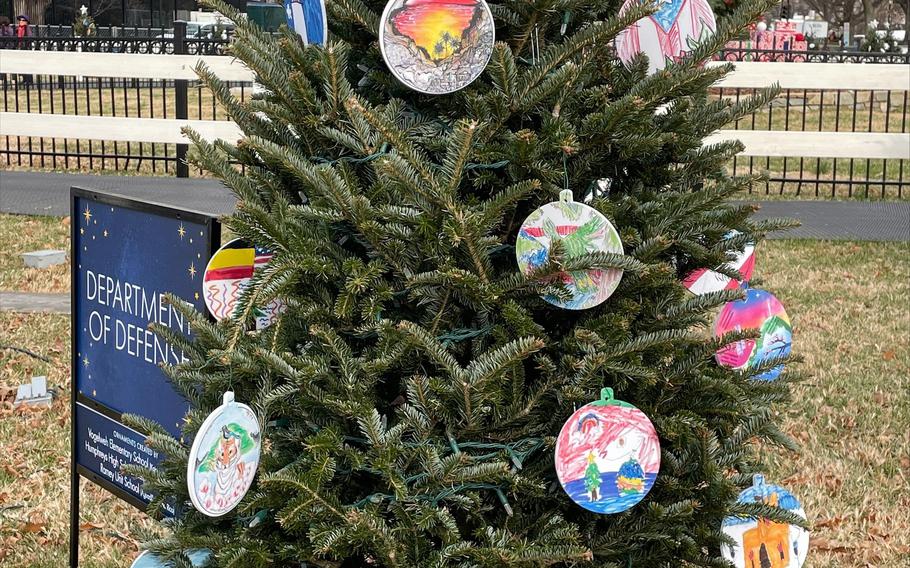 KAISERSLAUTERN, Germany — Holiday decorations in the U.S. capital have a touch of Tannenbaum thanks to American children in Germany who designed ornaments that are hanging alongside the National Christmas Tree.

Students from Vogelweh Elementary School in Kaiserslautern are among the first from a Defense Department school to have their artwork included in the high-profile display.

The artwork is part of the America Celebrates ornament program, a project funded by the National Park Foundation to highlight and celebrate the places that American students call home.

The foundation collaborates with the National Park Service and the U.S. Department of Education to hold the annual program. For the first time, three schools from the Department of Defense Education Activity have student-designed ornaments hanging on one of 58 trees surrounding the National Christmas Tree display in Washington, D.C. (President’s Park/White House Visitor Center)

The Vogelweh students, who were chosen through a contest held at the school, drew castles and German and American flags together, among other things that represent their experience in Germany, said Edith Allison, the school’s visual arts teacher.

The ornaments created from the Vogelweh students’ drawings are hanging on one of 58 smaller trees surrounding the National Christmas Tree and will be on display through Jan. 1.

Leaders in each of the Department of Defense Education Activity’s three regions were asked to submit a school for participation, said Stephen Smith, a spokesman for DODEA Europe. Vogelweh was chosen because of the school’s strong arts program, he said.

Each of Vogelweh’s seven grades, from pre-kindergarten to fifth grade, could submit one design. To get to eight, the school took an additional design from first grade, which had luck on its side.