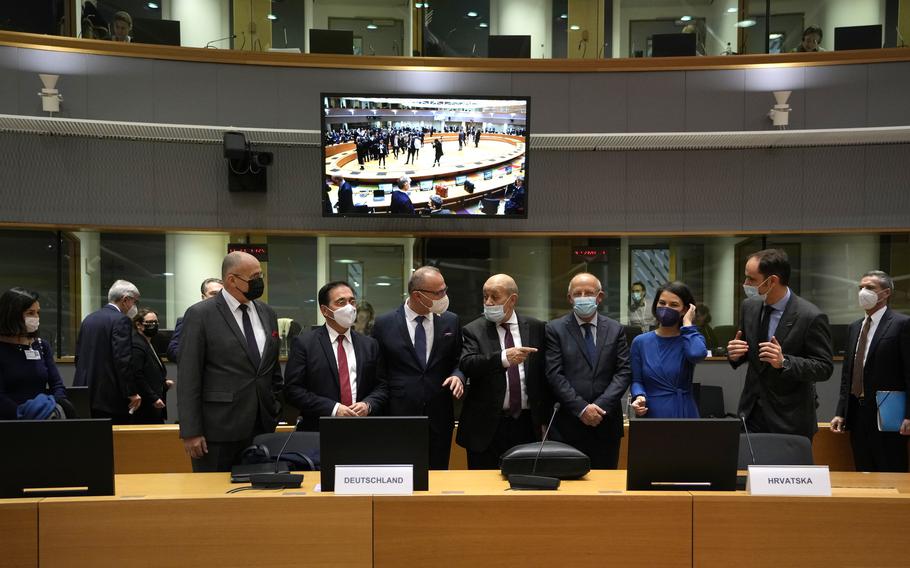 BRUSSELS — The European Union imposed sanctions Monday on a group of private Russian military contractors it accuses of fomenting violence and committing human rights abuses in the Middle East, Africa and Ukraine.

EU foreign ministers agreed to slap asset freezes and travel bans on eight people involved with the Wagner Group, including founder Dmitry Utkin, and three energy companies linked to the group in Syria.

"The activities of this group reflects the Russian hybrid warfare. They represent a threat and create instability in a number of countries around the world," EU foreign policy chief Josep Borrell told reporters after chairing the meeting.

EU headquarters said in a statement that "the Wagner Group has recruited, trained and sent private military operatives to conflict zones around the world to fuel violence, loot natural resources and intimidate civilians in violation of international law, including international human rights law."

It accused those targeted of "serious human rights abuses, including torture and extrajudicial, summary or arbitrary executions and killings, or in destabilizing activities in some of the countries they operate in, including Libya, Syria, Ukraine (Donbas) and the Central African Republic."

The EU said the group is "also spreading its malign influence elsewhere, notably in the Sahel region" of Africa. The EU warned that Wagner Group mercenaries pose a threat to the countries they work in, wider regions and to the 27-country EU itself.

The Wagner Group, owned by a confidant of Russian President Vladimir Putin, has been accused by Western governments and U.N. experts of human rights abuses in the Central African Republic and involvement in the conflict in Libya.

EU lawmakers say the group should be treated as a "proxy organization" for the Russian state. France and Germany have complained about the presence of Wagner Group fighters in Mali.

Russian Foreign Minister Sergey Lavrov has said the company has a "legitimate" right to be in Mali because it was invited by the transitional government, and he insisted the Russian government is not involved.