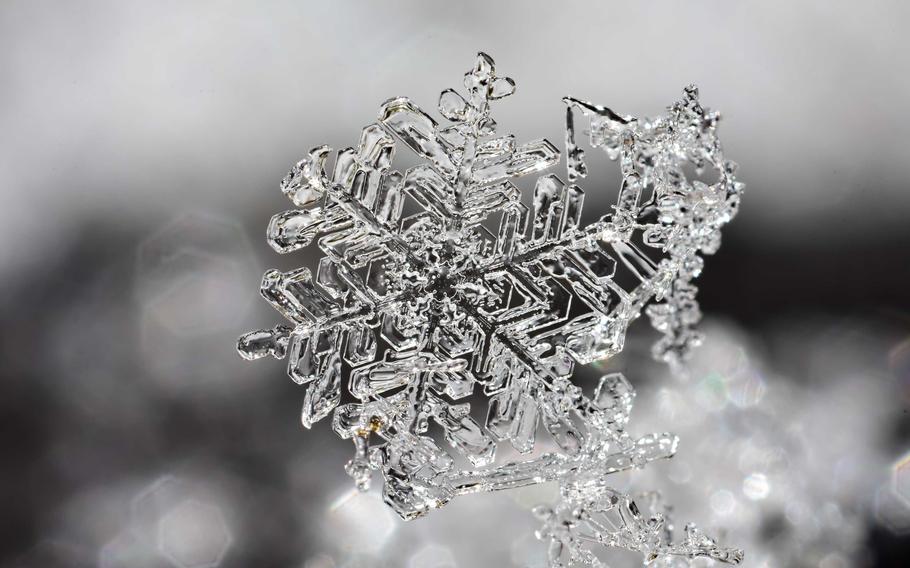 A snowflake crystal as seen in the Czech Republic on Nov. 29, 2021. (Severe Weather Europe/Facebook)

Late November and early December have brought record-breaking warmth to many parts of the Lower 48 states and other locations in the midlatitudes. But incredible cold has infiltrated areas nearer to the Arctic.

Historically frigid weather, tens of degrees below zero, has invaded northeast Russia, Scandinavia, Alaska and northern Canada in recent weeks. The cold is related to an unusually strong polar vortex that has trapped bone-chilling air over the high latitudes, allowing little of it to escape to the south.

The exceptional cold is occurring in some of the planet's fastest-warming areas and in no way counters the ongoing rapid climate change. Rather, it shows how weather patterns can arrange themselves to produce rather dramatic extremes.

The most remarkable cold crashed into Delyankir in northeastern Siberia on Wednesday. The rural location in Russia, about midway between the Sea of Okhotsk and the East Siberian Sea, saw its temperature bottom out at minus-78 degrees Fahrenheit (minus-61.1 Celsius). That was the lowest December temperature recorded in Russia since 1984, according to Thierry Goose, who tracks international weather data. Britain's Met Office described it as "one of the lowest temperatures to be reported in the Northern Hemisphere in several years away from Greenland."

Wednesday's blast of cold was the second of the month in northeastern Siberia. On Dec. 1 and 2, the Siberian Times reported that in-person school was canceled in Oymyakon, about 90 miles to the southwest of Delyankir, because of temperatures hovering as low as minus-76 degrees Fahrenheit. School is canceled in the village whenever temperatures drop below minus-67 degrees (minus-55 Celsius), the Siberian Times wrote. Oymyakon, the coldest inhabited location in the world, also saw temperatures plummet below this threshold on Tuesday and Wednesday this week.

Even amid the extreme cold, the Siberian Times reported that a photographer captured scenes of smoke emerging from an underground peat fire near Oymyakon, a reminder of the unusually warm and dry summer that contributed to a siege of blazes in the region. Such holdover fires are sometimes called "zombie fires." They burrow into the rich organic material beneath the surface, such as the vast peatlands that ring the Arctic, and smolder under the snowpack. The Copernicus Climate Service of the European Union reported carbon emissions from fires in northeastern Siberia during the summer were record-setting "at more than double previous years."

While Siberia has shivered, parts of southern Russia have simmered. Shatoy, in southwest Russia near the border with Georgia, soared to 75 degrees Fahrenheit (24 Celsius) on Wednesday. This 153-degree difference (85 Celsius) between Shatoy and Siberia's Delyankir was the second-largest temperature contrast ever observed in any country, tweeted Maximiliano Herrera, an expert on international weather extremes. It only trailed a difference of 160 degrees (88.7 Celsius) in the United States that occurred in January 1954.

Extreme cold has also chilled Scandinavia in recent days. Mika Rantanen, a researcher at the Finnish Meteorological Institute tweeted the following statistics about exceptional cold in the region:

In Helsinki, the first week of December was the coldest in 84 years.

Naimakka, Sweden, dipped to minus-46.8 degrees Fahrenheit on Monday, the lowest December temperature in Sweden in 35 years and coldest on record so early in the season.

Finland's Independence Day, on Monday, was the coldest since 1987.

Just to the south of Finland, Estonia endured its coldest early December weather in more than 60 years, according to Kairo Kiitsak, a meteorologist for the Estonian Environment Agency. He tweeted the mercury settled as low as minus-17.5 degrees (minus-27.5 degrees) on Tuesday.

On the other side of the Northern Hemisphere, a teeth-chattering chill has likewise taken hold of Alaska. The state endured its eighth-coldest November on record with temperatures 7.6 degrees below average. It was particularly bitter in the western and southwest portion of the state, where some locations experienced their coldest November on record. Temperatures were up to 20 degrees colder than average. Brian Brettschneider, a climate researcher based in Anchorage, tweeted that average temperatures in November were lower than typical levels "for any of the core winter months" (December through February) in Anchorage and Nome. Bethel had its coldest November in 80 years.

Temperatures in the 49th state moderated somewhat during the first 10 days of December but have remained lower than normal and are forecast to stay that way for the balance of December.

Some abnormally cold weather has also spread over parts of northern Canada. On Tuesday, the mercury plunged to minus-48.3 degrees (minus-44.6 Celsius) in Key Lake, Saskatchewan, according to Goose, its second-lowest reading on record so early in December.

Not all high-latitude locations have been colder than normal in recent weeks. Nearer the North Pole, temperatures have been relatively mild. Greenland and Baffin Island as well as their surroundings have seen much warmer than normal conditions. And as cold as it's been in Northern Europe, northern Siberia, northern Canada and Alaska, these places are experiencing an unmistakable long-term warming trend.

The recent cold episode is entirely related to the strength of the polar vortex, which can vary significantly over the course of a season. It's an example of a short-term weather fluctuation, rather than any long-term climate signal. To the south of the grip of the polar vortex, the warmth has been even more widespread and unusual than the cold has been to the north.

The central and eastern United States await a period of exceptional warmth next week, which is expected to break dozen of records, potentially by large margins.