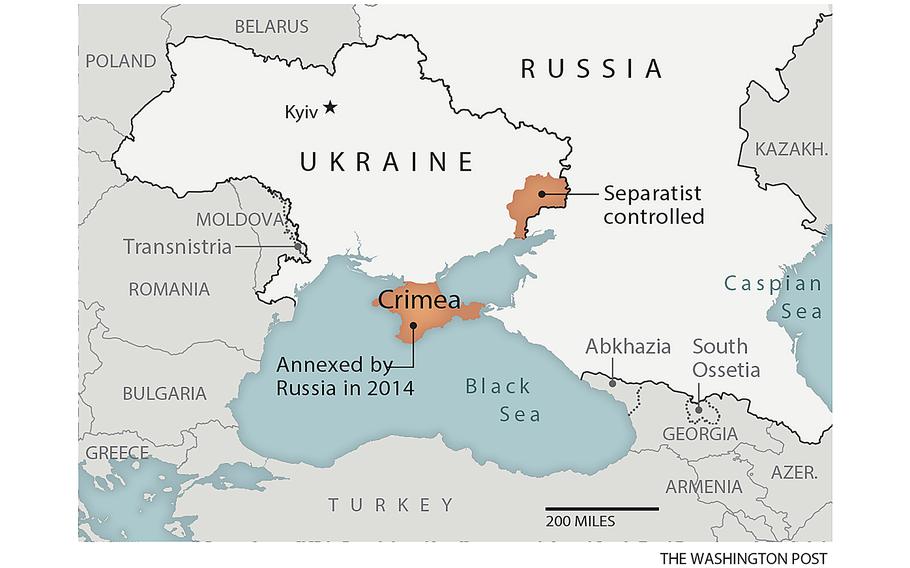 MOSCOW - Since President Joe Biden's call with Russian President Vladimir Putin over the Ukraine crisis, Russian officials have dug in deeper: blaming NATO for the confrontation, dismissing Ukraine as a puppet state of the West and ruling out a pullback of Russian forces massed near Ukraine's border.

Putin even compared Ukraine's fight against Moscow-backed separatists in eastern Ukraine to genocide.

It all suggests that - even if Putin heeds Biden's warnings - the current tensions in the region will look a lot like future tensions: with Russian troops staying along the Ukraine border and all that brings, including regular scares about possible attacks.

Here are six ways Russia views Ukraine. All are barriers to a swift resolution.

- A chance to redo the end of the Cold War. Putin's main presidential focus has been rebuilding Russia as a strong authoritarian state, projecting power in the Middle East and Africa - but, above all, in its self-proclaimed "sphere of influence" in former Soviet states.

That includes Ukraine. Angered over Ukraine's 2014 revolution - which ousted a pro-Russian government for a Western-leaning one - Putin swiftly annexed Crimea from Ukraine and backed separatists in eastern Ukraine in an ongoing conflict that has claimed nearly 14,000 lives.

It has pushed Ukraine further toward the West. A November poll by the Rating Group Ukraine agency showed 62% of Ukrainians want to join the European Union and 58% want membership in NATO - a move that Putin has called a "red line." A poll early this month by the same pollsters found 72% consider Russia a hostile power.

- "You don't understand, George, that Ukraine is not even a state." Putin made the comment to president George W. Bush at a 2008 NATO summit in Bucharest, Romania, when Bush pushed hopes by Ukraine and Georgia of joining NATO. At the time Putin threatened to encourage the secession of the Crimea and eastern Ukraine if Ukraine joined, warning that it would "cease to exist as a state."

Russian officials and state media propagandists often promote the view of Ukraine as a less-than-sovereign, structurally unviable country, not entitled to make its own alliances.

In a 5,000-word treatise on Ukraine published in July, Putin wrote that "true sovereignty of Ukraine is possible only in partnership with Russia."

Nikolai Patrushev, Russia's security council chief, called Ukraine a "protectorate" in a newspaper interview in November, adding an ominous note: "There's potential in Ukraine for an outburst of tensions so strong that millions of Ukrainians will flee to seek refuge in other places."

"One crisis away from collapsing" is how Maxim Suchkov, head of international studies at the Moscow State Institute of International Relations, described current U.S.-Russia relations.

- Russia's security buffer. Russia has long pursued a security buffer of pliable neighbors, seen as its rightful "sphere of influence." Russia's need for a security buffer is ingrained after successive invasions from Europe over the past centuries, said Alexander Baunov, an analyst at the Moscow Carnegie Center.

Efforts by rivals - NATO chief among them - to sell arms or form diplomatic and military alliances in Russia's perceived sphere are seen as trespass.

"Two bones need soft tissue between them," Vladislav Surkov, a former Putin aide who was in charge of Ukraine, told the Financial Times in June, referring to Russia and NATO. He added, "the geopolitical gravity of both will sever Ukraine."

Until that happens, Surkov predicted an endless fight for Ukraine: "It may die down, it may flare up, but it will continue, inevitably."

Russia's deputy foreign minister, Sergei Ryabkov, warned Thursday that Ukraine could become a Cuban missile crisis scenario - the U.S.-Soviet showdown in 1962 over Moscow's construction of missile bases in Cuba, bringing the world to the brink of nuclear war.

In 2014 after annexing Crimea, Putin first called for a "a new Yalta," referencing the deal at the end of World War II when Allied leaders carved the world into spheres of influence. Officials keep on floating it as a way to prevent a new war.

In Russia's ideal scenario, a geopolitical compromise would see its influence over Ukraine restored, or at least Kyiv forced to accept neutrality.

- "One Russia." After Putin's long essay this past summer extolling the "historical unity" of Russia and Ukraine as "one people," Ukraine's president, Volodymyr Zelensky, retorted that Putin's fraternal relations were "more like Cain and Abel."

Putin often speaks of a "One Russia," meaning Russia, Ukraine and Belarus - or "Big Russia" and "Little Russia," Russia being the "big" and Ukraine the "little." He argued in 2009 that "no one should be allowed to interfere in relations between us. They have always been the business of Russia itself."

This view highlights the common ancestry shared by Russia, Ukraine and Belarus in the medieval state of Kyiv Rus. Putin's claim that the West divided these tightly bound Slavic brothers offends many Ukrainians who see it as devaluing the country's two post-Soviet revolutions (2004-2005 and 2014) against Russian dominance.

His summer essay likened the formation of an ethnic Ukrainian state, hostile to Russia, to "the use of weapons of mass destruction against us."

Moscow portrays Russian speakers in Ukraine as needing its protection, issuing passports to more than 500,000 of them in two separatist regions of eastern Ukraine that form part of the Donbas. In September, thousands of them were bused to Russia vote in parliamentary elections.

The passports offer a potential pretext for military intervention to "defend" Russian citizens.

"And we have a duty to take care of them. Mother Russia, bring Donbas home," she implored.

- "Exporting chaos" - to solve your problems at home. A Russian nightmare: Ukraine as a strong, stable, Western-leaning democracy, where corruption is thwarted, civil society thrives and elections work.

A free, thriving democracy next door might inspire Russians to question their own system, where you can be jailed for a retweet, a protest sign, journalism or a comedy skit - and where Putin never loses power.

"Exporting chaos is nothing new," he wrote last month in an article on pro-Kremlin website Aktualnye Kommentarii, giving Russia's Crimea annexation as "a vivid example" of how to unite the country. "Dividing is a synonym of chaos."

- Echoes of Russia's imperial history. Russia's longest ruler, Ivan III, was called the "gatherer of Russian lands" by quadrupling Russian territory in his 65-year reign that ended in the early 16th century.

Russia lost its Soviet empire 30 years ago. Russia has moved on from its weakness in the 1990s, argued Russian foreign policy analyst Fyodor Lukyanov, "but the West's mind-set hasn't moved on."

Ukraine looms large in this equation. Moscow thinks it is time to ditch the idea that "countries can choose their alliances as though it is nobody else's business, which was never part of traditional geopolitics," he wrote on the Russian Global Affairs website. "This approach is no longer working."

Russia now sees the chance to expand its clout, believing the United States is in decline as a force to shape global policies.

Estonian Prime Minister Kaja Kallas told a news conference Thursday that said Putin was using military threats to "force NATO to choose certain paths and, most worryingly, the desire to divide Europe into spheres of influence."