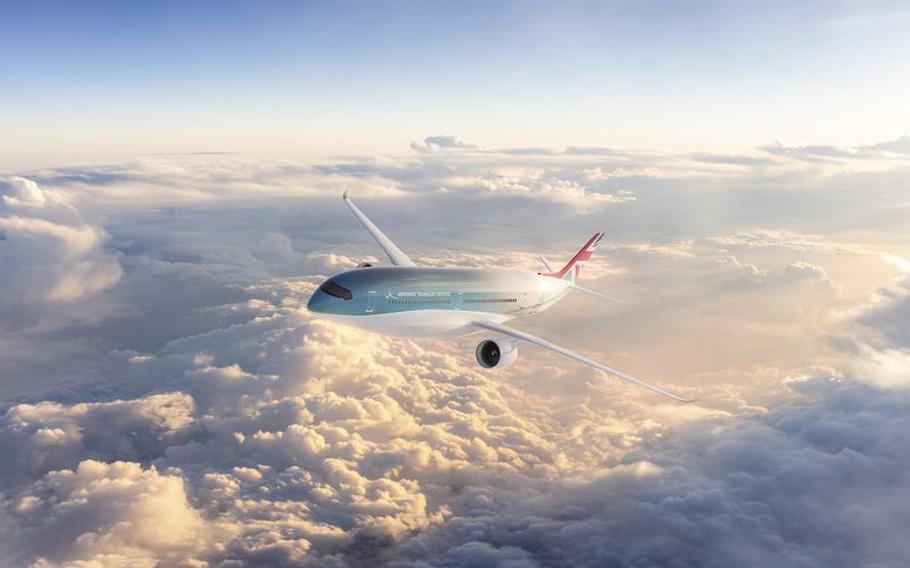 A U.K.-backed research group unveiled a design for a liquid hydrogen-powered airliner theoretically capable of matching the performance of current midsize aircraft without producing carbon emissions.

The FlyZero concept envisions a plane carrying 279 passengers non-stop from London to San Francisco at the same speed and comfort as today, the Aerospace Technology Institute said in a statement Monday. The group, a partnership between the U.K. government and industry, is meant to accelerate high-risk projects that will benefit home-grown firms.

Hydrogen propulsion is seen as one of the most promising technologies for achieving carbon-neutral commercial flights. However it’s expensive and more challenging to store on board, and it will take years to develop the planes and build infrastructure such as airport refueling capacity.

The U.K., which hosted the COP26 climate summit last month, is funding new technologies to help create aerospace jobs while meeting its climate targets. The government has committed $2.6 billion (1.95 billion pounds) of funding to ATI since its start in 2013 through 2026, an amount to be matched by industry. The FlyZero concept received 15 million pounds in government funding.

“These designs could define the future of aerospace and aviation,” said Business Secretary Kwasi Kwarteng in the statement. “By working with industry, we are showing that truly carbon free flight could be possible, with hydrogen a frontrunner to replace conventional fossil fuels.”

ATI said it expects hydrogen aircraft to be operating from the mid-2030s offering better economics than conventional planes. By early next year, the FlyZero project will publish detailed concepts for regional, narrow-body and midsize aircraft, with technology roadmaps, market and economic reports and a sustainability assessment, the group said.

The midsize aircraft being showcased Monday would store hydrogen at minus 418 F (minus 250 C) in cryogenic fuel tanks at the rear of the plane and in two smaller “cheek” tanks along the forward fuselage to keep the aircraft balanced.

It would have a wingspan of 177 feet, between Boeing’s 767 and 787 twin-aisle jets, and be powered by two turbofan engines.

While Boeing hasn’t set plans for a hydrogen plane, Airbus has targeted a commercial airliner for entry into service by 2035. The European company has told the European Union that a model carrying more than 150 passengers won’t be in wide use until 2050.

In the meantime, the aviation industry has put its focus on so-called sustainable fuel, which can be blended into the kerosene that powers current aircraft, and battery powered flight, which is limited to smaller craft like air taxis because of the weight of cells.

The aviation industry is under pressure to slash emissions rapidly or face limits to growth, even as breakthrough technology remains years away. Airlines and manufacturers are also contending with ongoing disruption to business caused by Covid-19, which has weakened their financial outlook already.