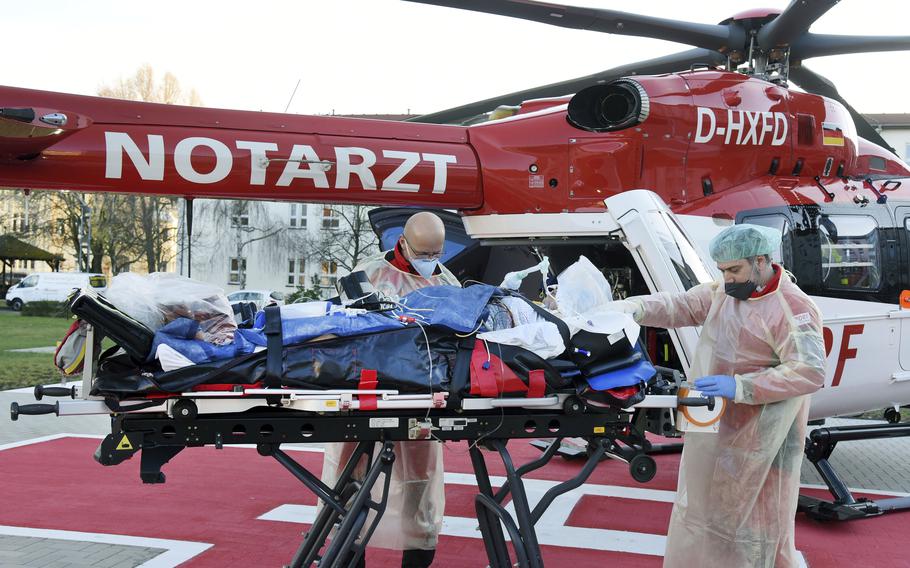 From the Corona intensive care unit of the Paul Gerhard Stift Evangelical Hospital, a pregnant woman suffering from COVID-19 is taken to the DRF helicopter by Air Rescue emergency in Wittenberg, Germany, Friday, Dec. 3, 2021. (Waltraud Grubitzsch)

BERLIN — Germany's health minister said Friday that more than 1% of the population is currently infected with the coronavirus, and he called on citizens to get vaccinated if they haven't done so yet.

The country confirmed 74,352 new daily COVID-19 cases and 390 additional deaths, figures published by the federal disease control agency showed . According to the Robert Koch Institute's calculations, some 925,800 people in Germany are considered actively infected with the virus.

Health Minister Jens Spahn noted that the number of unvaccinated residents who are infected and seriously ill is much higher than their share of the overall population.

"If all German adults were vaccinated, we wouldn't be in this difficult situation," he told reporters in Berlin.

Spahn, who is likely to leave office next week when Germany's new center-left government takes office, has opposed compulsory vaccination and made clear Friday that he would vote against the measure.

About 68.8% of people in Germany are fully vaccinated, while the government has set a minimum target of 75%. For the first time since the summer, more than 1 million doses were administered on a single day Wednesday.