At least 31 migrants dead after vessel sinks in English Channel 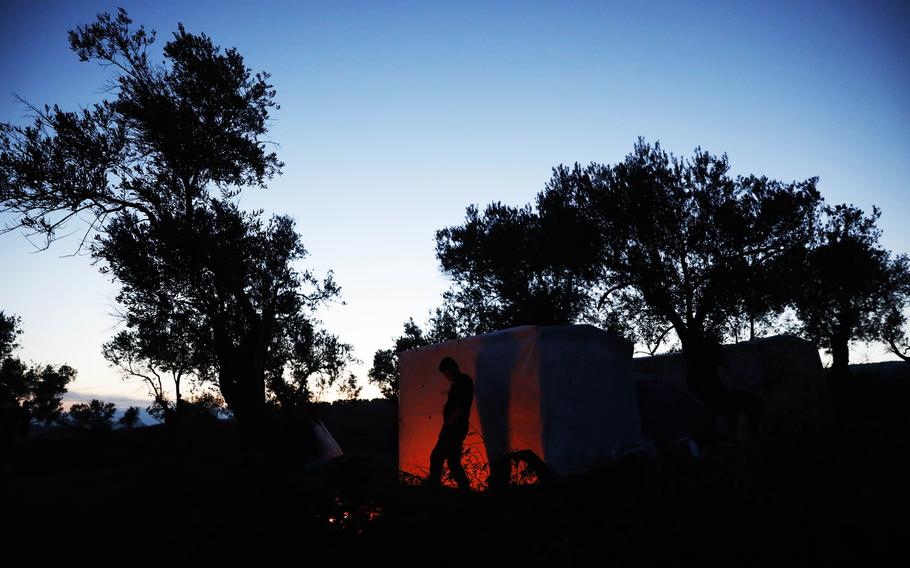 A migrant from Afghanistan warms himself on a fire at a migrant camp in Lesbos, Greece. (Giorgos Moutafis/The Washington Post)

PARIS — At least 31 migrants are presumed to have died while trying to cross the English Channel from France to Britain on Wednesday, making it one of the deadliest incidents on a dangerous route.

"Today is a [day of] great national mourning for France, and for Europe, and humanity," Darmanin said.

Both French and British officials focused the blame on human traffickers. Four suspects who might be connected to the incident had been apprehended, Darmanin said.

The Organization for Migration said Wednesday's drowning amounted to the largest known loss of life in the Channel since the U.N.-affiliated group started recording data in 2014. At least 15 more people have died while trying to cross at other points in 2021.

Since 1999, more than 300 migrants have died attempting to cross, according to the Institute of Race Relations, a British think tank.

Wednesday's incident occurred off the coast of Calais, France, in the Dover Strait, where the Channel narrows to 21 miles across. That's one of the world's busiest shipping lanes. It can also be dangerous for people in small flimsy boats when hammered by strong currents and high winds.

Wednesday's weather forecast, though, was for fairly calm seas and light and variable winds. Local fishermen told Reuters that more migrants than usual had tried to undertake the crossing, to take advantage of the conditions, though the water remained extremely cold.

Officials on Wednesday did not release any information about the nationality of those who drowned. Aid workers say many of the people who try to make the journey are fleeing conflict — in Afghanistan, Iran, Syria, Iraq, Sudan, Eritrea, Yemen and elsewhere. Some want to get to Britain to reunite with family, or because they speak English and hope that will help them find work.

French Prime Minister Jean Castex called the incident a "tragedy" and condemned human traffickers who "exploit the distress and misery" of migrants.

French President Emmanuel Macron said in a statement that "France will not let the Channel become a cemetery." He called for more action at the European level, including an emergency meeting of European ministers and an "immediate reinforcement" of the European Border and Coast Guard Agency's resources.

"What this shows is that the gangs who are sending people to sea in these dangerous crafts will literally stop at nothing," Johnson said.

He added that efforts to slow the human smuggling by France, with $70 million in new funding by Britain to help patrol the beaches, "haven't been enough."

"Our offer is to increase our support, but also to work together with our partners on the beaches concerned, on the launching grounds for these boats," Johnson said.

"Because there is no doubt at all that the gangs concerned, unless they are shown that their business model won't work, that they can't simply get people over the Channel from France to the U.K., they will continue to deceive people, to put people's lives at risk and, as I say, to get away with murder," he continued.

In his statement, Macron defended French efforts to date, saying that more than 1,500 traffickers had been caught in the region since the beginning of the year.

Drowning at sea in the English Channel is not the only way that migrants have died trying to reach Britain. Others have been killed trying to board trucks, containers and trains, traveling either via ship or through the Channel Tunnel.

In 2019, 39 Vietnamese migrants were found dead in a shipping container, having suffocated on their journey by sea ferry and truck hauler, from Zeebrugge in Belgium to Purfleet in southeast England. Two of the smugglers were convicted of manslaughter and sentenced to 20 and 27 years.

Pham Thi Tra My, 26, was among the victims. She sent a heartbreaking text message to her mother when she was in the container, en route to England. "Mom, I love you. I'm dying, I can't breathe," she wrote.

Nearly three times as many migrants have crossed by sea this year compared with last year. Earlier this month, 1,185 people ventured across in a new daily record that the British Home Office described as "unacceptable."

The influx of migrants has turned into a point of contention in the post-Brexit tussle between Paris and London.

Conservative Party lawmakers have urged the British government to "take back control" of the Channel. Critics have compared the scene to the U.S.-Mexico border, decrying what they see as a too-soft approach to illegal immigration.

In response, Home Secretary Priti Patel recently authorized tough new tactics to push boats back toward France. That policy, however, has not been implemented. Such aggressive moves could violate maritime law and endanger lives, if migrant vessels were unseaworthy and in distress.

Natalie Elphicke, a Conservative lawmaker for Dover, called Wednesday's incident an "absolute tragedy" and said it highlighted why "saving lives at sea starts by stopping the boats entering the water in the first place."

"As winter is approaching the seas will get rougher, the water colder, the risk of even more lives tragically being lost greater," she said.

Pro-Brexit campaigner Nigel Farage, now a host on GB News, has warned that Johnson's government is ignoring the crossings and opening England's beaches to illegal immigration.

In a column in the Daily Telegraph on Monday, Farage warned, "the migrant crisis is out of control, and the Prime Minister doesn't seem to care."

As it turns out, Farage himself was out in a boat in the English Channel on Wednesday, filming migrant vessels and tweeting, as he prepared for an evening broadcast.

Ahead of its exit from the European Union last year, Britain deployed military drones to surveil people in dinghies trying to cross. On the other side, French police have cleared makeshift camps where hundreds of migrants had lived on the northern coast, while aid workers urge authorities to find housing alternatives.

Responding to the increase in recent crossing attempts, a sporting goods company last week stopped selling kayaks in its shops in northern France.

Adam and Booth reported from London. Ellen Francis in London contributed to this report.