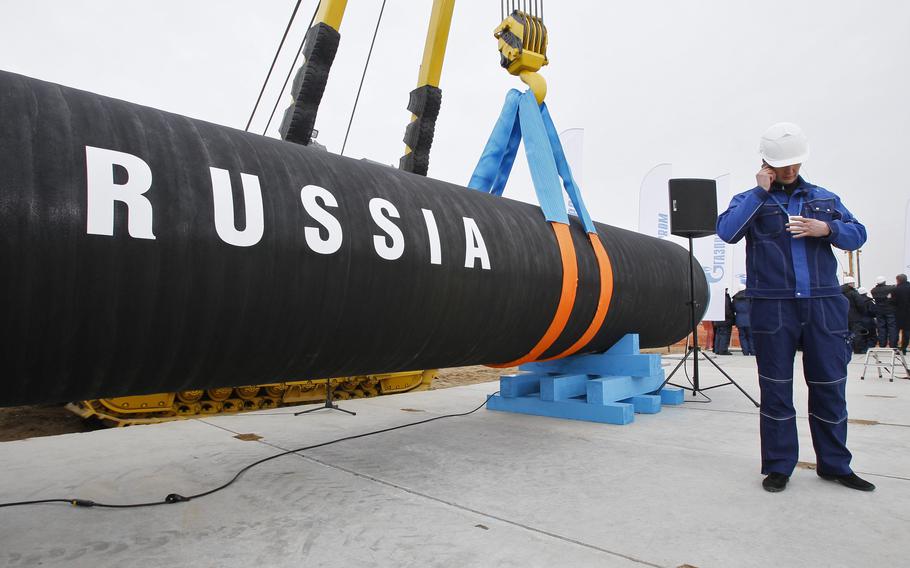 A Russian construction worker speaks on a mobile phone in Portovaya Bay some 170 kms (106 miles) north-west from St. Petersburg, Russia, Friday, April 9, 2010 during a ceremony marking the start of Nord Stream pipeline construction. Germany’s network regulator said Tuesday it has suspended its procedure to certify the operator of the new pipeline Nord Stream 2 that would bring Russian gas to Germany under the Baltic Sea because of an issue with the company’s legal form. (Dmitry Lovetsky/AP)

The U.S. imposed sanctions on a ship involved in the construction of the Nord Stream 2 gas pipeline as the Biden administration looks to exert more pressure on Russia without antagonizing Germany.

In a report sent to Congress on Monday, the administration designated Transadria Ltd., a Cyprus-based entity believed to be a Russian shell company, over pipeline work done by one of its ships, the Marlin, according to a statement from Secretary of State Antony Blinken.

Another vessel, the Blue Ship, was cited for its work on the pipeline but not sanctioned because it belongs to an entity affiliated with the German government, according to a U.S. official who asked not to be identified.

The sanctions probably come too late as construction of the pipeline was finished in September and the first of two lines is already filled with gas. While the U.S. has longed opposed the project -- which it deems a threat to European energy independence -- it is extending its sanctions list without provoking German leaders who are determined to see the project through.

“The sanctions on Transadria Ltd. and the blocking of The Marlin are non-events, in our view,” said Mitch Jennings, an oil and gas analyst at Moscow-based Sova Capital. “The pipeline is already built.”

The two vessels were included in a report that the administration is required to send to Congress every 90 days as part of a law that was passed in 2020 and is meant to slow or halt completion of the pipeline.

Fresh penalties “on the Nord Stream 2 are a continuation of the sanction language, which Washington stubbornly doesn’t want to give up in any way,” Kremlin spokesman Dmitry Peskov told reporters on a conference call. “Of course, this is something we view extremely negatively. We consider that illegal and wrong especially on the background of intense attempts to develop the previously lost dialog.”

The Danish Maritime Authority has allowed the Blue Ship to do rock placement along the Nord Stream 2 route, and the vessel was seen in Baltic waters on Nov. 11. The Marlin has left the German port of Mukran and is heading toward the Russia’s St. Petersburg harbor, according to MarineTraffic.

Nord Stream 2, the operator of the project, declined to “comment on potential impacts of U.S. sanctions.”

The move is unlikely to mollify critics of the Biden administration in Congress. Lawmakers from both parties want the U.S. to take a tougher stand against a project they say undermines European security by giving Russia more leverage over the continent. Republican Sen. Ted Cruz of Texas has held up most of President Joe Biden’s State Department nominees over the issue.

Administration officials have argued that the pipeline, which connects Russia to Germany bypassing Ukraine, was 90% complete when they took office. More punitive measures would only alienate Germany, a key NATO ally and backer of the project.

“Even as the Administration continues to oppose the Nord Stream 2 pipeline, including via our sanctions, we continue to work with Germany and other allies and partners to reduce the risks posed by the pipeline to Ukraine and frontline NATO and EU countries and to push back against harmful Russian activities, including in the energy sphere,” Blinken said in a statement.

The latest U.S. move comes as Europe is confronting an energy crunch that has sent gas and electricity prices soaring. The sanctions were also imposed a week after the pipeline suffered a setback last week, with the German regulator suspending its certification process, a bureaucratic step that sent gas prices soaring.

The pipeline would already be operational were it not for the certification issues, Sova Capital’s Jennings said. “Critics of the pipeline could call the sanctions too little of a response,” he said.

In a nod to heightening tensions between Russia and Europe, the U.S. official said that Russia is coming close to the line of using energy as a weapon. A formal determination that it’s done so will trigger a further response, which is likely to include new sanctions on the Russian energy sector, according to the official.

In July, the administration agreed to a deal with Germany that offered new help to Ukraine, which opposes Nord Stream 2, to strengthen and modernize its energy sector and ensure reverse flows of gas to the country if Russia -- which has about 100,000 troops massing on the Ukraine border -- tries to cut off supplies.

The U.S. official said the current projection is that Nord Stream 2 won’t become operational for several more months. The official said that could work in the U.S.’s favor, because it will give more time to modernize Ukraine’s energy sector and for leaders in Kyiv to negotiate a new gas-transit agreement with Russia on a separate pipeline.

In a previous Nord Stream 2 report in May, the State Department said that Nord Stream 2 and its chief executive Matthias Warnig are engaged in sanctionable activity under U.S. law, but that the administration would waive penalties for national security reasons. Those waivers remain in place.