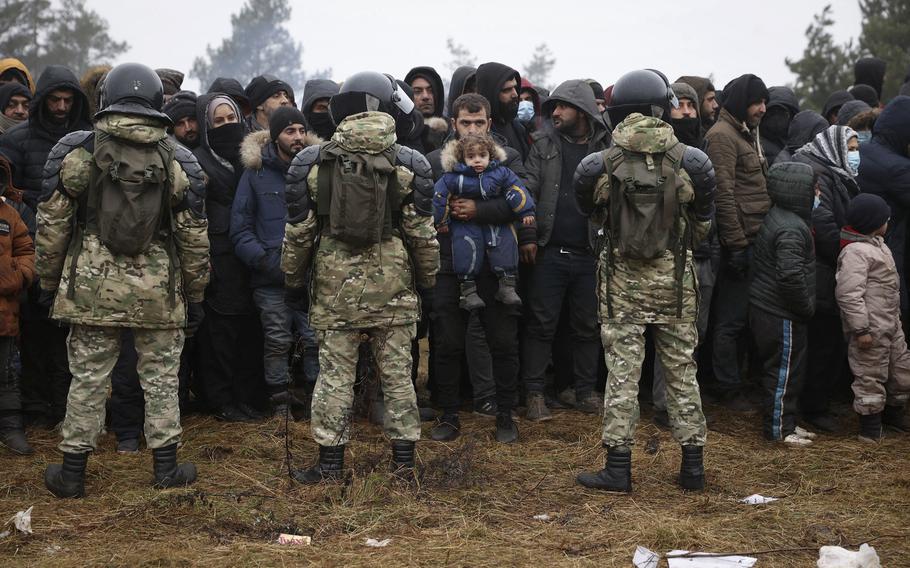 Migrants stand in front of Belarusian troops as they gather in a camp near the Belarusian-Polish border in the Grodno region on November 14, 2021. (Oksana Mancuk/BELTA, AFP via Getty Images/TNS)

(Tribune News Service) — President Vladimir Putin said Russia isn’t behind the migrant crisis playing out at the Poland-Belarus border but instead is ready to help resolve it.

Speaking to Rossiya-1 TV Channel on Sunday, Putin said he had learned about developments in the border region from media reports. Meanwhile, a top EU official said foreign ministers would work Monday on the framework for additional sanctions against Belarus.

“We are ready to contribute to this in every possible way, if of course, something depends on us,” Putin said.

Poland has accused the Kremlin of masterminding the artificial flow of thousands of people from countries including Iraq, Syria and Afghanistan onto the border, hoping to cross into the EU.

Prime Minister Mateusz Morawiecki said on Sunday that Poland, Lithuania and Latvia are considering asking NATO to hold emergency talks about the standoff.

Putin’s economic and political backing allowed Belarusian President Alexander Lukashenko to weather mass demonstrations against his 27-year rule in 2020, as well as U.S. and EU sanctions imposed after his brutal crackdown on the opposition. It’s unlikely Lukashenko makes many bold decisions without the blessing of his Kremlin ally.

The authoritarian leader has since upped the ante against the west, using migrants as a weapon and threatening to block the transit of natural gas supplies from Russia to the European Union.

“The actions by the Lukashenka regime threaten security, sow division, and aim to distract from Russia’s activities on the border with Ukraine,” U.S. State Department spokesman Ned Price said in a statement on Sunday.

Writing in the Telegraph on Saturday, British Foreign Secretary Liz Truss said Russia bears “clear responsibility” for the border situation and should put pressure on Minsk to end the current standoff. According to her, the unfolding situation with migrants was carefully orchestrated.

“This carefully crafted crisis is an attempt to divert attention away from the litany of abhorrent acts and human rights violations that the regime has already committed,” Truss said of the Belarusian government.

In Sunday’s interview Putin rejected the accusations: “We have absolutely nothing to do with this, just absolutely. It’s just a desire to transfer problems from a sick head to a healthy one.”

According to the release, the pair discussed the “difficult migration situation” at the border of Belarus and EU. Belarus said it was ready for “mutually respectful” dialog.

In a tweet after the call, Borrell said the current situation “must stop. People should not be used as weapons.”

The EU is considering additional sanctions against Belarusian officials and companies, with an announcement expected later this month. Monday’s meeting will focus on the legal framework for expanded sanctions, the Financial Times reported, citing Borrell.

Poland is concerned about increasing attempts by migrants, who have been pushed to its border by Belarus servicemen, to break through the makeshift barbed-wire fence running along the EU’s eastern frontier.

Morawiecki told PAP news agency that he may request talks under Article 4 of the NATO treaty, which allows any member nation to request consultations if it considers its territorial integrity, political independence or security is at risk.

The Polish-Belarusian border “will be an effective and final frontier” to Lukashenko’s actions, he was cited as saying by PAP.