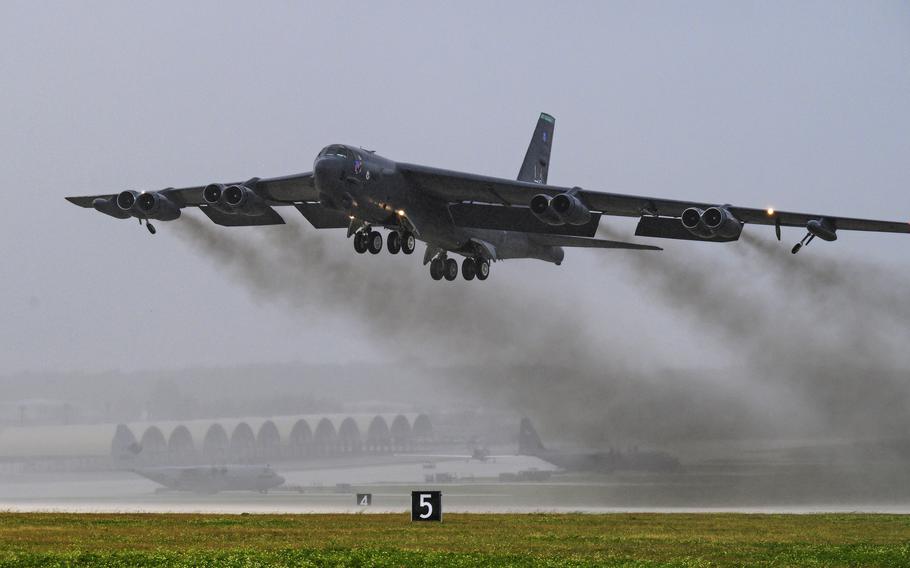 A U.S. Air Force B-52 Stratofortress takes off from Andersen Air Force Base, Guam, on Feb. 2, 2021. A U.K. group of researchers has launched a website detailing the carbon emissions of militaries worldwide. The group says most militaries aren’t accurately reporting their data. (Jacob M. Thompson/U.S. Air Force)

A group of U.K.-based academics is calling for mandatory reporting of the carbon pollution that the U.S. military and its counterparts worldwide release into the atmosphere.

On the sidelines of the United Nations climate change conference in Scotland on Tuesday, researchers unveiled a website with data they had compiled, concluding that most militaries are “severely underreporting” their greenhouse gas emissions.

The study and the resulting website were a collaboration between the Conflict and Environment Observatory and the universities of Durham and Lancaster.

In many countries, militaries pollute more than any other institution, but reporting of their emissions to the United Nations remains voluntary and is often not calculated, the group said Tuesday.

Only a handful of the 60 that the researchers examined met the U.N.’s minimum reporting requirements, according to a statement by the group.

“Militaries produce a lot of greenhouse gas emissions, but until they and we know just how much, it’s going to be very difficult to start reducing them, something that all sectors of society have to do urgently if we’re to keep below 1.5 degrees of warming,” Doug Weir, research and policy director at the Conflict and Environment Observatory, told Stars and Stripes on Monday.

Weir was referring to the amount of global warming in degrees Celsius that the international community is trying to stay below to prevent the worst effects of climate change.

Only Cyprus, Germany, Hungary, Norway and Slovakia currently follow the voluntary reporting standard, according to data published on the new Military Emission Gap website, https://militaryemissions.org/, which brings the voluntary tallies into one place for the first time.

The institutional changes that would occur with mandatory emissions reporting would be significant, researchers said. It could result in “greener” operations planning and more eco-friendly weapons systems, many of which remain extremely carbon-intensive.

Under the U.N.’s Framework Convention on Climate Change, whose signatories include the U.S., developed countries are required to report their total annual carbon emissions. But military emissions have been exempted from reporting since Washington petitioned for it in the 1990s.

And even the voluntary emissions disclosures only account for things like military vehicles and buildings, and are “nowhere near the full story of what militaries produce,” Weir said.

He added that most military greenhouse gases are embedded in the supply chains of the weapons and equipment that are purchased and could be up to five times larger than what the U.N. requires to be reported.

Responding to concerns that moving away from fossil fuels could have negative national security implications, Benjamin Neimark, a senior lecturer in geography and ecology at Lancaster University, suggested that climate change poses a threat equal to or greater than the ones posed by traditional adversaries.

The Defense Department denied “very significant underreporting” of its emissions and pointed to data it publishes independently. Per U.S. law, the department tracks and publishes emissions data from resources it owns, like military hardware, and indirect emissions from the generation of electricity, steam, heating and cooling it buys.

The Pentagon is also examining ways to obtain data down the supply chain for assets it doesn’t directly own but whose emissions it is responsible for, known as “scope 3 emissions,” Defense Department spokeswoman Jessica R. Maxwell told Stars and Stripes.

Oliver C. Belcher, an associate professor in the School of Government and International Affairs at Durham University, acknowledged that DOD’s efforts to document emissions are “much better” than those of many other countries.

However, because the U.S. data is fragmented across various departments and agencies, “the ‘reporting’ quality itself is very poor,” Belcher said.

“Part of the reason it is so difficult to calculate the ‘true’ cost of U.S. military operations — both day-to-day domestic and international operations, as well as combat — is there is no ‘one-stop shop’ to access this data,” Belcher said.

A clear, transparent and uniform way for the U.S. and other countries to report their military emissions would help experts better understand the defense industry’s contribution to global warming, as the full extent of its impact remains unknown.

“We need this information out there; we need people to pick up on it,” Neimark said. “Having knowledge is power.”