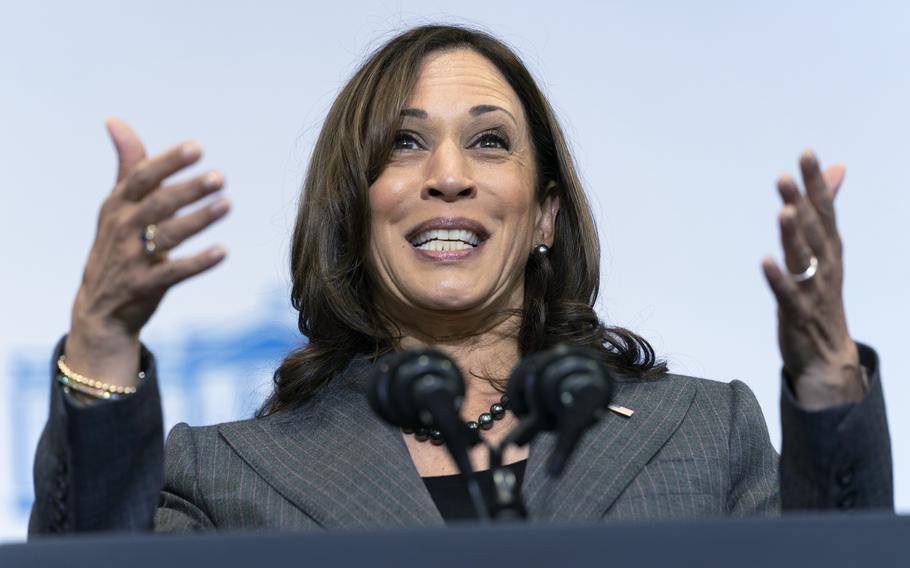 Vice President Kamala Harris is embarking on five days of personal diplomacy in France as she aims to raise her international profile and continue healing a rift between the U.S. and its oldest ally.

Harris is scheduled to mingle with officials from a couple dozen nations as she showers attention on President Emmanuel Macron.

“It is good to be in France,” she told reporters after she deplaned at Paris Orly Airport. “I am looking forward to many, many days of productive discussions reinforcing the strength of our relationship.”

U.S.-France ties have been strained in recent months following Australia’s decision to cancel a $66 billion submarine contract with France in favor of a new security pact and nuclear-powered submarine deal with the U.S. and U.K.

“We are focused on looking forward, not looking backward,” Harris adviser and spokeswoman Symone Sanders told reporters aboard Air Force Two when asked about the submarine tiff.

This is the third international trip for Harris - but perhaps the first not eclipsed by a pressing crisis. Her journey to Central America earlier this year was dominated by her “do not come” admonishment to would-be migrants in Guatemala and by her defense of her decision not to visit the U.S.-Mexico border by saying: “And I haven’t been to Europe.”

Then her visit to Southeast Asia in August was overshadowed by the U.S.’s turbulent withdrawal from Afghanistan and the death of 13 American service members in a bomb attack.

Harris and Macron have a bilateral meeting planned at the Elysee Palace on Wednesday.

On Thursday, Harris will speak at the Paris Peace Forum, an event focused on gaps in global governance, before having dinner with Macron.

She’ll also attend a conference Friday, co-hosted by Macron, meant to show support for the Libyan people as they move toward national elections.

One of her first scheduled stops after arriving Tuesday morning was the Institut Pasteur, the research facility where aides said her mother conducted breast cancer research in the 1980s.

Harris and Emhoff will mark Veterans Day - honored as Armistice Day in France - with a visit to Suresnes, a cemetery originally dedicated to American service members killed in World War I. Trump went to Suresnes shortly after facing a backlash for missing a visit to the Aisne-Marne American Cemetery in northern France in 2018 due to rainy weather.