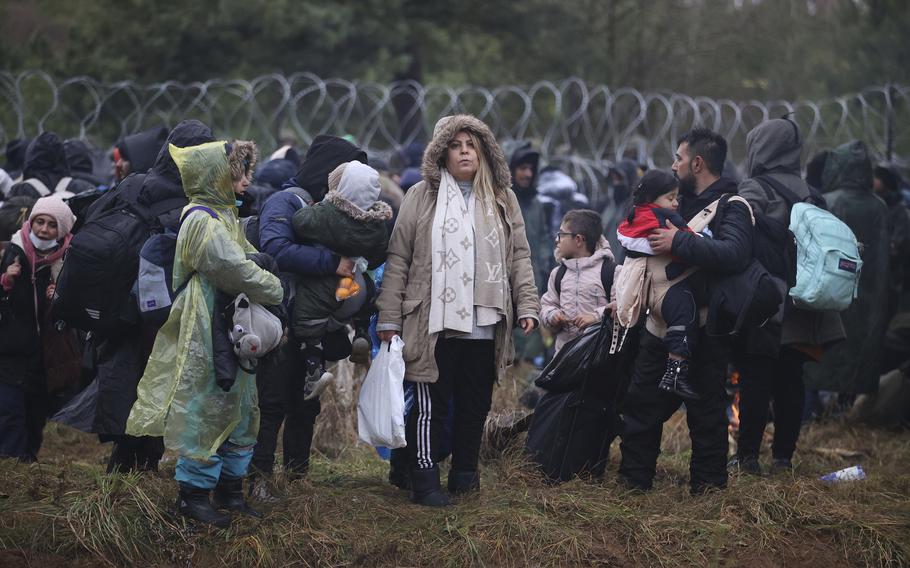 Migrants from the Middle East and elsewhere gather at the Belarus-Poland border near Grodno, Belarus, Monday, Nov. 8, 2021. Poland increased security at its border with Belarus, on the European Union’s eastern border, after a large group of migrants in Belarus appeared to be congregating at a crossing point, officials said Monday. The development appeared to signal an escalation of a crisis that has being going on for months in which the autocratic regime of Belarus has encouraged migrants from the Middle East and elsewhere to illegally enter the European Union, at first through Lithuania and Latvia and now primarily through Poland. (Leonid Shcheglov/AP)

The European Union is planning to boost sanctions related to Belarus and its actions that have triggered a growing migrant and humanitarian crisis on its eastern frontier.

The move comes after Polish troops used tear gas to prevent migrants ushered to the border by Belarus from storming a barbed-wire fence along the two countries’ border on the EU’s eastern edge. The standoff risks turning increasingly deadly as thousands of people from the Middle East are stuck in the forests with temperatures dropping below zero.

An EU working group on Monday agreed to broaden the scope of the current sanctions regime directed at Belarus to include persons and entities supporting illegal border crossings, according to an official familiar with the decision. Adoption of the new criterion will likely happen on Nov. 25.

“The Belarusian authorities must understand that pressuring the European Union in this way through a cynical instrumentalisation of migrants will not help them succeed in their purposes,” European Commission President Ursula von der Leyen said in a statement late Monday.

The EU said it’s also monitoring flights to Belarus from more than two dozen countries, including from Morocco, Syria, Iran, Azerbaijan, Algeria and elsewhere, to look for patterns of migrant trafficking. The bloc is looking at the frequency of flights, the occupancy of planes and other patterns as it contemplates possible sanctions of airlines involved in shuttling migrants to Minsk.

Poland estimates that as many as 4,000 people were gathered near the frontier, out of more than 10,000 migrants expected to be in Belarus. Prime Minister Mateusz Morawiecki visited the border on Tuesday and the country’s parliament will debate the crisis -- which the government sees as the nation’s biggest security threat this century -- later today.

“The stability and security of the entire EU is at stake,” Morawiecki said on Twitter. “We will not be intimidated and will defend peace in Europe with our partners from NATO and the EU.”

The migrant crisis gives Poland and the EU a chance to work together despite a deepening row over Warsaw’s rejection of the bloc’s legal standards and concerns over whether the country is adhering to the rule of law. A deputy justice minister suggested that Poland may stop paying its EU membership fees if the row escalates.

In May, Belarusian President Alexander Lukashenko threatened to allow drugs, radioactive material and illegal migrants to flow into the EU unhindered, saying Belarus won’t prevent people from countries “abused by the West” from crossing into the bloc. His administration faces sanctions after his political rivals fled a crackdown following a disputed election last year.

Estonia’s prime minister, Kaja Kallas, said that sanctions should be accelerated against individuals and companies that support the Belarusian government’s activities, including airlines.

“Diplomatic efforts with EU institutions are under way to persuade the countries of origin to cooperate and stop people from falling into the trap of the Lukashenko regime,” she said in a statement.

Russia has staunchly backed its ally in Minsk in the crisis but rejected allegations it’s playing any role in encouraging the migrant flows.

Foreign Minister Sergei Lavrov said on Tuesday that Europe bears the responsibility for resolving the crisis and blamed the West for causing it with its policies in the Middle East and North Africa. He warned the EU against what he called “double standards,” citing the example of European aid to Turkey to house Syrian refugees as one that might be applicable in the Belarus case.

“They don’t want to stay in Belarus,” Lavrov said. “They want to go to Europe, the very same Europe that for many years has advertised its way of life. One should answer for one’s words.”