Buy Photo
Visitors to the grand opening of the USO center at RAF Lakenheath, England, enjoy a free catered lunch Nov. 4, 2021. The organization also opened its first location at an Army base in Poland a couple of days earlier. (Kyle Alvarez/Stars and Stripes)

RAF LAKENHEATH, England — Overseas U.S. personnel had reason to do the equivalent of an end zone dance Thursday, as the USO parlayed its long partnership with the National Football League into another new location.

The opening of the USO at Lakenheath follows by just a couple of days another grand opening ceremony to inaugurate the organization’s first presence in Poland.

“We’ve been playing NFL games in London and other locations internationally for around 10 years, and we’re excited to continue that,” said Melissa Pardi, the NFL’s senior director of social responsibility. “So next year when we come back to play here, we’re hoping to bring some of our teams here and interact with this USO center.”

Lakenheath hosted the NFL Experience on Thursday as part of the grand opening. Attendees could throw a football, simulate kicking a field goal and run through a bounce house with common football obstacles. Free NFL swag was handed out, too.

Service members and their families are eligible to use the center, which boasts a stage with guitars, a Nintendo Switch and PlayStation 5 video game systems and plenty of other diversions.

The collaboration between the USO and the NFL goes back to the Vietnam War, according to the USO website. Pete Rozelle, the NFL commissioner during the war, wanted the league to show support for the troops in Vietnam.

The idea for “goodwill tours” was born, and the NFL was the first sports organization to send players overseas to visit American troops, according to the USO website. The league also donates money to nonprofits like the USO through its Salute to Service program. 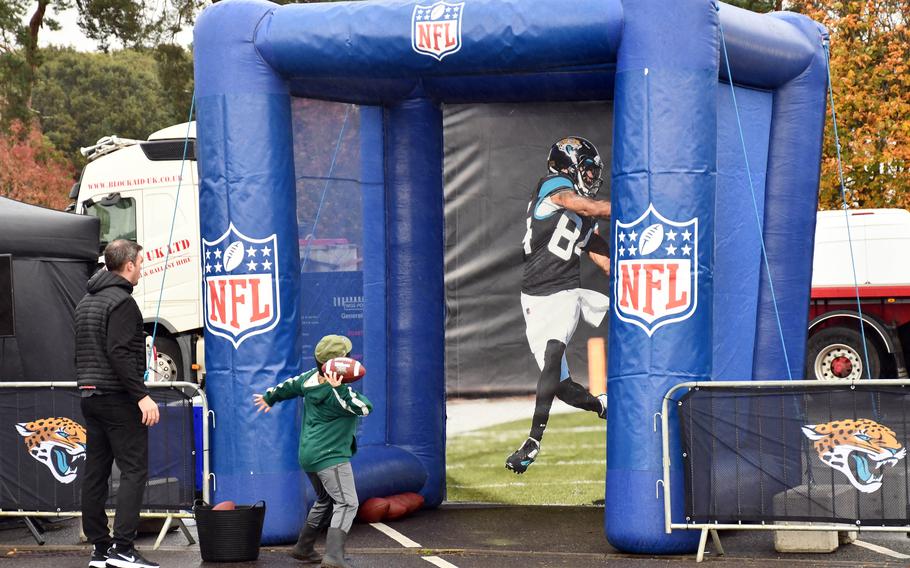 Buy Photo
A child hurls a pass at the NFL Experience during the grand opening of the USO at RAF Lakenheath, England, on Nov. 4, 2021. (Kyle Alvarez/Stars and Stripes)

The new locations in England and Poland are intended to help the USO reach more service members stationed in Europe and help them stay connected to the homeland, the organization said in a statement.

J.D. Crouch, the organization’s CEO, told attendees at the Lakenheath grand opening that the USO is “a projection of the desire of the American people to support the military especially those overseas.”

Service members at the Lakenheath festivities were generally enthusiastic about having a place where they can hang out and enjoy free snacks.

“The USO is a wonderful place for brand new airmen to connect with others, especially if they’re new to the area,” said Staff Sgt. Kevin Huynh Tram, a budget analyst for the 48th Civil Engineering Squadron.

It was the second European gala of the week for the USO. On Tuesday, the organization unveiled its first Poland location at a rural Army base in Powidz.

“This will definitely be a morale booster for our soldiers,” Col. Paul W. Dahlen, 191st Regional Support Group commander, said in a USO statement.

Amenities at the Powidz center include a lounge, an internet cafe and a gaming area with PlayStation 5 consoles as well as pool, ping pong and foosball. In addition, assorted USO programming will be hosted by the center.

The England and Poland sites join more than 250 USO centers worldwide, according to a statement from the organization. More information about the center in Powidz is available at https://poland.uso.org.