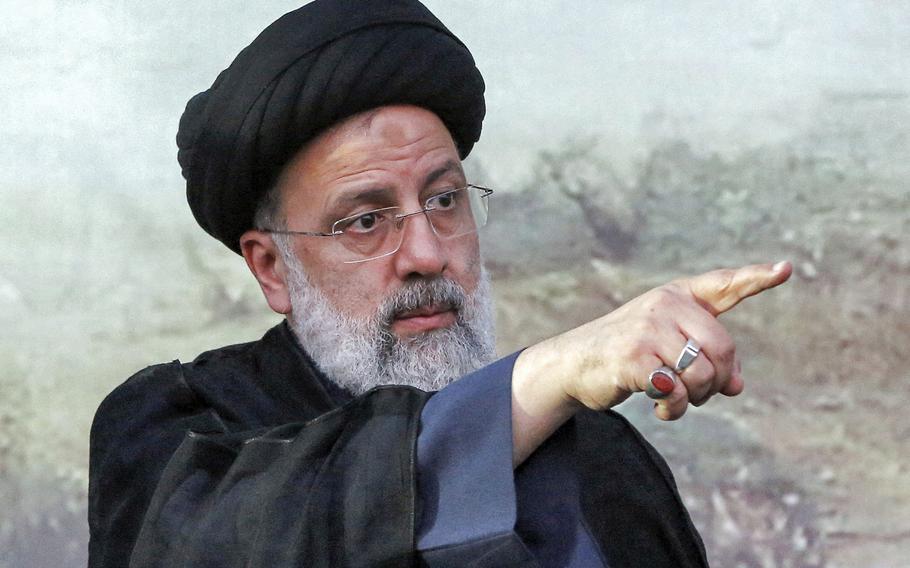 Iranian President Ebrahim Raisi is shown at an election campaign rally in Eslamshahr, Iran, on June 6, 2021. Raisi, who was elected in June, is key to revival of a deal with other nations over its nuclear program. (AFP, Getty Images/TNS)

ROME (Tribune News Service) — Facing the possibility of renewed negotiations with Iran in the coming weeks, President Joe Biden on Saturday opened the door to lifting sanctions as part of a diplomatic effort to prevent Tehran from building nuclear weapons.

The offer was made as part of a joint statement with German Chancellor Angela Merkel, British Prime Minister Boris Johnson and French President Emmanuel Macron. The four leaders met on the sidelines of the G-20 conference in Rome to plan their strategy for dealing with Iran, which has raised alarms by increasing its enrichment of nuclear material.

It will likely be difficult to break a diplomatic stalemate that has persisted on the issue for months, and Biden signaled that he wasn’t willing to move forward without commitments from Tehran.

“This will only be possible if Iran changes course,” the statement said, adding that they were urging Iran’s new president, Ebrahim Raisi, “to seize this opportunity and return to a good faith effort to conclude our negotiations as a matter of urgency. That is the only sure way to avoid a dangerous escalation, which is not in any country’s interest.”

Biden campaigned on returning to the Iran nuclear agreement, which was reached by President Barack Obama in 2015 and abandoned by President Donald Trump three years later. Since then, the U.S. has targeted the Iranian economy with punishing sanctions; Tehran, in turn, has ramped up its nuclear activities.

“We are convinced that it is possible to quickly reach and implement an understanding on return to full compliance and to ensure for the long term that Iran’s nuclear program is exclusively for peaceful purposes,” the statement said.

Vali Nasr, a professor of Middle East studies and international affairs at Johns Hopkins University, doesn’t believe the Biden administration has high hopes for negotiations and may no longer view the existing framework as viable.

The challenge, Nasr said, is maintaining unity with European allies, who are more interested in resuscitating the JCPOA. He said Saturday’s meeting shows Biden is “very keen on keeping the Europeans very close to the United States.”

Jake Sullivan, Biden’s national security adviser, described the U.S. and Europe as closely aligned, telling reporters Thursday that they would be “all singing from the same song sheet on this issue.”

Russia and China, two other participants in the Iranian nuclear agreement, did not participate in the joint statement nor Saturday’s meeting.

Simply getting back to the negotiating table, let alone reaching a new deal, has been challenging. Robert Malley, the U.S. special envoy for Iran, blamed Tehran for spending months stalling. He said Monday that “it’s hard to find an explanation, an innocent explanation for why they are taking so long.”

A break came Wednesday when Iran’s deputy foreign minister, Ali Bagheri Kani, said the nation’s leaders have agreed “to start negotiations before the end of November.”

No date has been set for resuming talks, and there are doubts in the White House that they will take place.

“We have heard positive signals that they are, but I think we have to wait and see when and whether they actually show up at the negotiating table,” Sullivan said.

However, he said, the Biden administration will likely seek an informal understanding where talks continue and neither side escalates the situation. In such a gray area, U.S. sanctions aren’t lifted but are selectively enforced, and Iran doesn’t rush toward building a nuclear weapon.

Turmoil in the Middle East has also jeopardized diplomatic efforts. Most recently, Iran has been blamed for a drone attack on a military base in Syria where U.S. troops are based. No American casualties were reported.

Brian Katulis, a senior fellow and vice president for policy at the Middle East Institute, said the threat of Iranian ballistic missiles, drones and proxy forces will make it hard to deal with the nuclear program in isolation.

“In the real world, there’s an escalation going on,” he said.

Katulis added, “It’s not an environment of trust and confidence.”