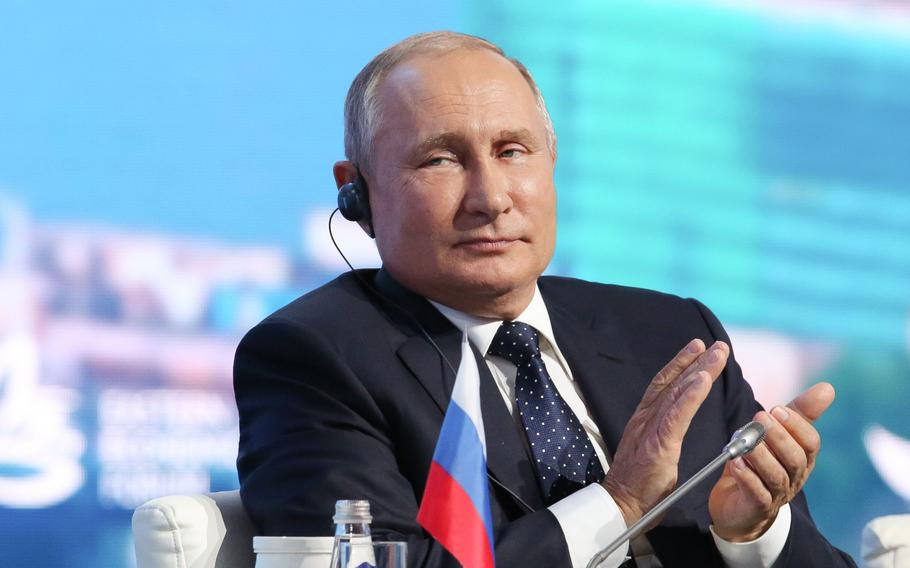 Vladimir Putin, Russia’s president, at the Eastern Economic Forum in Vladivostok, Russia, on Sept. 5, 2019. Russia hosts Taliban envoys for multination talks on Wednesday, Oct. 20, 2021, to discuss the security and political situation in Afghanistan. Putin has cautioned “there should be no hurry” to officially recognize their governance of Afghanistan. (Andrey Rudakov/Bloomberg)

MOSCOW — Since the return of Taliban rule in Afghanistan, the calculus for Moscow has been tricky: how to reassert its regional influence after the U.S. military exit while also keeping some distance from internal Afghan struggles.

“Afghanistan itself is not of interest to Russia,” said Andrei Serenko, the head of the Moscow-based Center of Contemporary Afghan Studies. “Russia wants to use Afghanistan without getting involved in Afghanistan.”

Russia’s gambit will be tested Wednesday as it hosts Taliban envoys for multination talks to discuss the security and political situation in Afghanistan. Russian President Vladimir Putin has cautioned “there should be no hurry” to officially recognize their governance of Afghanistan.

But the meeting offers another stage for the Taliban to open international channels as the West and others struggle over diplomatic recognition and aid, citing the Taliban’s past human rights abuses and severe limits imposed on girls and women. Earlier this month, U.S. officials held talks with a Taliban delegation in Doha, Qatar, to discuss security issues and safe passage for those seeking to leave the country.

The so-called “Moscow format” is far broader. It is expected to include representatives from China, Pakistan, India, Iran and other countries. The United States, though invited, is not attending, State Department spokesman Ned Price said Monday.

No potential breakthroughs are on the agenda, Russia’s presidential representative for Afghanistan Zamir Kabulov said Friday, but added there will be “a candid conversation behind closed doors.”

In talks between representatives of Russia, China and Pakistan on Tuesday, the countries “expressed joint interest in providing urgent humanitarian and economic assistance” for Afghanistan, according to a statement by the Russian foreign ministry.

Perhaps more important for Russia than the substance of the meeting is that it’s happening at Russia’s initiative, analysts said.

Moscow wants to appear as mediator that must have a seat at the table in matters that concern Afghanistan, said Serenko, noting that Russia still feels the sting from the humiliating withdrawal of Soviet troops in 1989 after a 10-year occupation of Afghanistan.

He said that Russia’s top priority, however, is using the new regional security concerns to increase influence in Central Asia, an area where Moscow competes for influence with Beijing.

As the Taliban swept into Kabul in August with U.S.-backed Afghan forces in disarray, Russian armored vehicles were at the Afghanistan border with Tajikistan for military exercises — a signal from Moscow that it can fill the security void in the region with the Americans now gone.

Foreign Minister Sergei Lavrov said earlier this month that Russia’s “Central Asian friends” have assured Russia that they do not want U.S. military units stationed on their territory. The U.S. military maintains partnerships with some Central Asian nations, but no longer has the temporary footholds in Uzbekistan and Kyrgyzstan established after the Sept. 11, 2001 terrorist attacks.

Russia initially took a warmer tone after the Taliban regained power. It was one of four countries that did not immediately evacuate its Kabul embassy staff. Russia’s ambassador to Afghanistan, Dmitry Zhirnov, said at the time that “the current situation in Kabul is better than under Ashraf Ghani,” the Afghan president who fled the country.

Putin encouraged other countries to establish good-neighbor relations with Afghanistan’s new leaders in the days after the Taliban takeover. But last week, he expressed skepticism that the Taliban will stanch drug production and said the threat of terrorism in the region has increased. Recent bombings in Afghanistan have raised concerns that the Taliban are unable to curb other militant and terrorist groups, mainly the Islamic State.

Russian officials have said they’re preparing to send humanitarian aid to Afghanistan, but it’s expected to be modest compared to other countries’ financial support. The Taliban remain on the list of a banned terrorist organizations in Russia.

As for diplomatically recognizing the Taliban, Putin told a virtual summit of ex-Soviet countries on Friday, “We realize that we have to interact with them, but there is no need to jump the gun.”

Though Russia has hosted Taliban officials several times in recent years, Serenko said Moscow doesn’t hold much sway with the group, especially with the Haqqani network, considered one of the Taliban’s most influential and feared factions.

The Taliban were invited to Moscow for Wednesday’s talks two weeks ago, they didn’t accept until Friday.

“This conference is not about Afghanistan,” Serenko said. “It’s all about Russia. Russia wants to show the Americans that without Russia, the Afghanistan problem won’t be solved.”