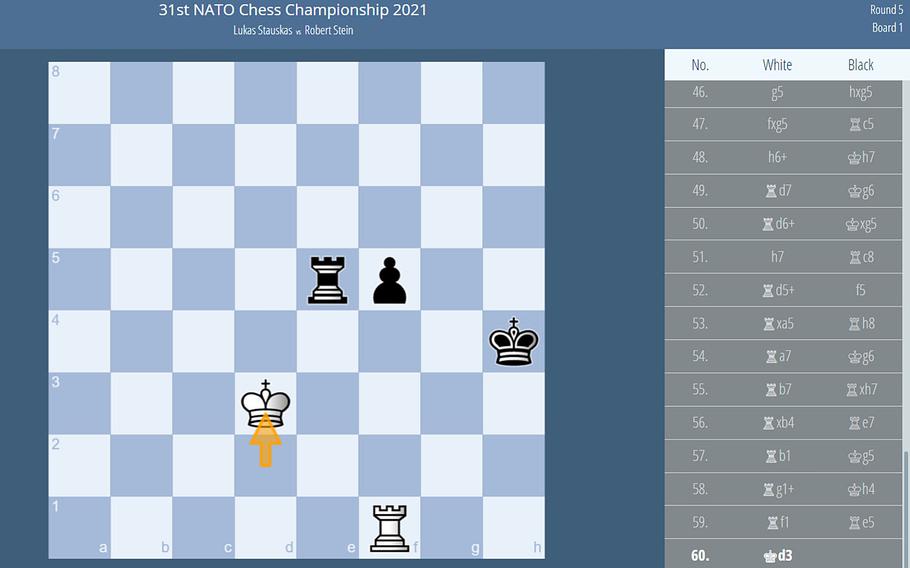 Buy Photo
This screen shot shows the latter stages of the match between Lithuania's Lukas Stauskas and Germany's Robert Stein, who finished first and second in the 31st NATO Chess Championships. (Stars and Stripes)

Poland emerged triumphant as almost 100 individual members of the NATO alliance put attack and defensive strategies to the test — on the chess board.

Retired Army Col. David Hater led the U.S. team and made his 16th appearance at the championships, which began in 1989 — when some current members were allies of the Soviet Union. It wasn’t held in 1993 due to funding issues and 2020 because of the coronavirus pandemic.

The U.S. team was in second in the early stages of the seven-round event.

“Unfortunately, we didn't finish as well as we would have liked,” Hater said.

Poland edged Greece 21-20 1/2 points for the title, tallied via a Swiss scoring system that awards points to the top four finishers from each six-member team. It’s the 17th time in 18 competitions that Poland has finished in the top three since it first entered the event, Hater said. Germany, which has won the event a record 23 times, settled for bronze this year.

Active-duty and retired service members from the Navy, Marines and Army also competed for the American team or a NATO team featuring members from allied countries.

The American team was selected by ranking in the U.S. Chess Federation, Hater said.

“Just being selected sets you apart from your peers and it is quite an honor being selected to represent your country,” he said. “Also, the ability to test yourself against the best military members from allied countries is quite enticing.”

Estonia is set to host the championships next year.