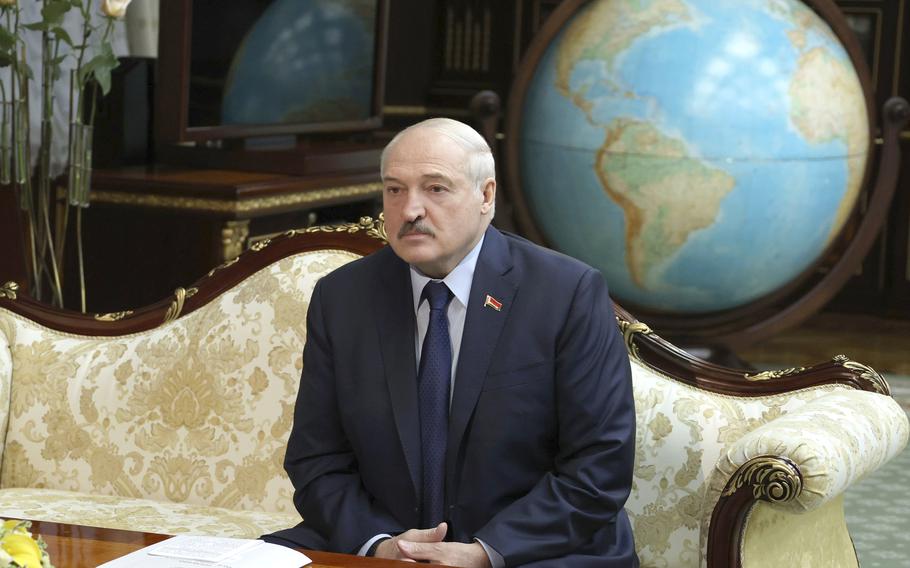 KYIV, Ukraine — Russia's foreign minister said he discussed the Russian media situation in Belarus during a visit to the country on Thursday following the arrest of a journalist who worked for a top Russian newspaper.

Hienadz Mazheyka, a Belarusian reporter for Russian daily Komsomolskaya Pravda, was arrested this month after writing about an apartment shootout in Minsk that killed two people — an opposition supporter and an officer of the KGB, Belarus' state security service.

Mazheyka's report about the shootings in the capital of Belarus, quoted a friend describing the dead opposition supporter in a positive light. The journalist faces up to 12 years in prison on charges of inciting social strife and insulting authorities.

Belarusian authorities described the opposition supporter as a "dangerous criminal" and alleged he fatally shot one KGB officer before others fired in return and killed him. The authorities have arrested more than 200 people who posted social media comments about the incident.

Komsomolskaya Pravda responded to Mazheyka's arrest by shutting down its branch in Belarus. Russian officials have voiced regret about the situation, but stopped short of criticizing authorities in Belarus, which has close political, economic and military ties with Russia.

Russia has strongly backed Belarusian President Alexander Lukashenko, who unleashed a fierce crackdown on the opposition and independent media after months of massive protests.

More than 35,000 people have been arrested and thousands beaten by police for protesting Lukashenko's election to a sixth term in an August 2020 vote that the opposition and the West have denounced as a sham.

Moscow's loans and political support have helped Lukashenko shore up his rule amid the demonstrations and Western sanctions.

As part of the clampdown, Belarusian authorities have shut down the biggest independent media outlets, blocked access to popular news sites and targeted journalists with raids and detentions.

A total of 28 journalists in Belarus, including Mazheyka, are currently behind bars, either already convicted and sentenced or awaiting trial.