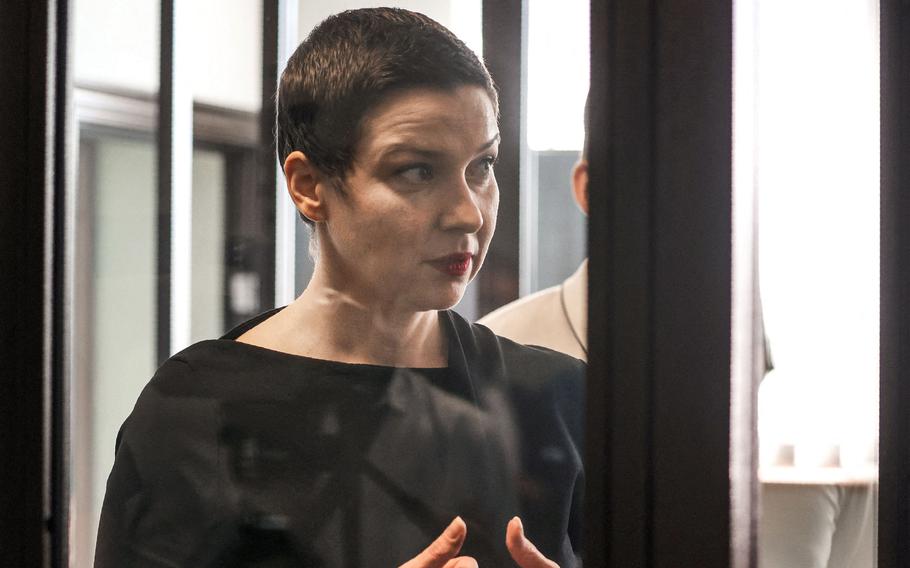 Maria Kolesnikova, the last remaining protest leader still in Belarus, at the opening of her trial on charges of undermining national security, conspiring to seize power and creating an extremist group, in Minsk on Wednesday, Aug. 4, 2021. (Ramil Nasibulin, Belta, AFP, Getty Images/TNS)

Maria Kalesnikava, 39, who ripped up her passport to stop security agents expelling her from Belarus, was convicted of conspiracy to seize power and of leadership of an extremist organization at a closed-court hearing in the capital Minsk on Monday. Maksim Znak, 40, a lawyer who worked in the opposition campaign to challenge Lukashenko at last year’s presidential elections, was sentenced to 10 years on the same charges. Both had spent almost a year in detention.

Kalesnikava became a prominent public face in opposition candidate Sviatlana Tsikhanouskaya’s election campaign and was one of the leaders of protests that erupted against Lukashenko’s claim to have won with 80% support. More than 30,000 protesters were detained in violent police crackdowns amid allegations of torture in prison. Hundreds remain in jail.

“We demand the immediate release of Maria & Maksim, who aren’t guilty of anything,” Tskihanouskaya said on Twitter. “It’s terror against Belarusians who dare to stand up to the regime.”

The convictions follow the sentencing of former banker Viktor Babariko, who was barred from running in the election, to 14 years in prison in July. He’s now working as an oven stoker in the bakery of a labor penal colony, his lawyer Natalya Matskevich said on Twitter.

The European Union said Kalesnikava and Znak were among more than 650 “political prisoners” in Belarus jails and called for their immediate release. The bloc will “continue its efforts to promote accountability for the brutal repression by the Belarusian authorities,” it said in a statement.

While the U.S. and the EU refused to recognize the election result and imposed sanctions in response to the violence, Russia has backed Lukashenko as the Kremlin draws Belarus more tightly into its political orbit.

Lukashenko’s trip to see Putin on Thursday will be their sixth bilateral meeting since the disputed elections and the two leaders have also had multiple phone conversations, according to the Kremlin’s website. They plan to give a joint news conference and observe military drills Russia and Belarus are holding this month.