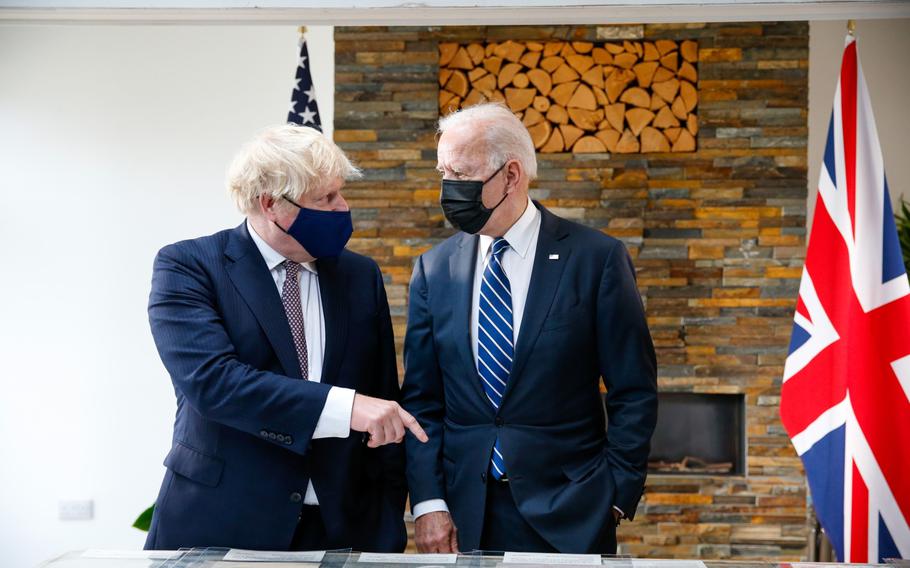 Prime Minister Boris Johnson and President Joe Biden during their bilateral meeting in Carbis Bay, U.K., on June 10, 2021. Virus reproduction numbers published on Friday, Aug. 13, 2021, indicate COVID-19 is in retreat in five of England’s seven regions and in the nation as a whole, good news for Johnson. (Hollie Adams/Bloomberg)

Coronavirus data suggest the U.K. is slowly emerging from the latest wave of the pandemic, even after the government pushed ahead with an almost full reopening of the economy last month.

Virus reproduction numbers published on Friday indicate COVID-19 is in retreat in five of England’s seven regions and in the nation as a whole, while the national statistician’s weekly survey showed infection rates broadly stable in England, Wales and Northern Ireland and declining in Scotland.

The numbers come as a boost to Prime Minister Boris Johnson, who faced criticism from scientists last month when he proceeded with the final stage of his plan to lift pandemic rules at a time when infections appeared to be reaching their peak. All legal social distancing requirements were dropped, and nightclubs were allowed to reopen after 18 months of enforced closing.

While the U.K. remains far from pre-COVID normality, the government wants individuals to take personal responsibility for their own safety, rather than relying on rules. An inoculation program among the fastest in the world means that more than 75% of adults are fully vaccinated, and government data on Thursday showed the economy rebounded more than expected in June.

Still, health authorities warned against complacency. The latest daily coronavirus data show 94 deaths were logged Thursday, close to the high of 99 on July 30 in the latest wave. There were 33,074 new cases, down from a recent peak of more than 60,000 on July 15.

The return of soccer’s Premier League this weekend is viewed as one potential risk, after the European Championship earlier in the year coincided with a surge in the virus. Public Health England Medical Director Yvonne Doyle advised fans attending matches to take precautions.

“COVID-19 has not gone away and there are a few things we can all do to reduce the risk,” Doyle said in a statement Friday. “You might want to arrive early or late to help avoid large crowds and wear a mask particularly in enclosed and crowded spaces.”

— The reproduction rate was down in London and four other English regions, while it rose slightly in the Northeast of England and Yorkshire, and in Northwest England.

— The infection rate remained unchanged from the previous week in England and Northern Ireland in the week ended Aug. 6, at 1 in 75 and 1 in 55 respectively.

Papers released by the Scientific Advisory Group for Emergencies also showed government advisers revised their medium-term projections to reflect the improving situation. On July 28, their central projection put daily deaths above 100, and approaching 150, in England through the first half of August. But a week later, that outlook had changed to a central case of about 70 daily deaths, dropping below 60 toward the end of the month.

The documents also show an improving picture for hospital admissions: On July 28, the scientists projected an uptick in August, but by Aug. 4 they were projecting a steady decline.