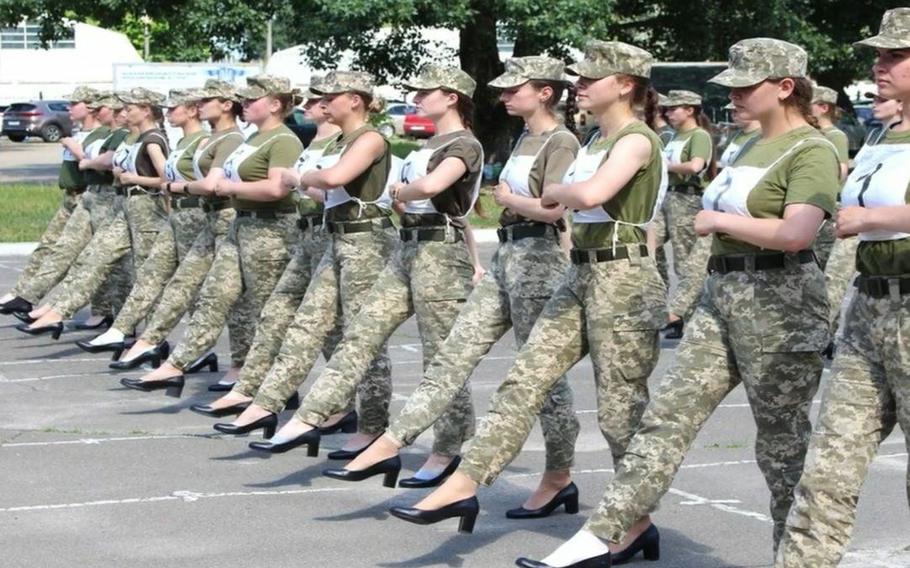 Ukraine is starting to walk back its plan for female military cadets to wear heels in an upcoming parade following an outpouring of criticism, including demands that the country’s male defense minister don the often uncomfortable footwear.

The pictures prompted a swift backlash on social media, with critics — including female Ukrainian legislators — accusing the military of sexism and having a “medieval” mind-set.

“It is hard to imagine a more idiotic, harmful idea,” opposition lawmaker Inna Sovsun said in a Facebook post warning that marching in heels sacrificed women’s health for the sake of a stereotype of them as “beautiful dolls.”

The furor culminated on Friday when female lawmakers brought high-heeled shoes into parliament and put them in front of Defense Minister Andriy Taran. One legislator suggested Taran wear the women’s shoes during next month’s parade marking 30 years of independence.

Even members of the cabinet joined in the criticism.

“The purpose of any military parade is to demonstrate the military ability of the army. There should be no room for stereotypes and sexism,” said a joint statement from three cabinet members, including Minister of Veterans Affairs Yulia Laputina, the Associated Press reported.

The Defense Ministry declined to comment. But in a statement posted Friday morning on Facebook, it said the heels were part of dress uniform regulations in place since 2017. The post also featured pictures of women from other countries — including what appeared to be the United States — wearing heels during military events. (Ukrainian soldiers of different genders all wear boots during combat.)

But the government’s stance appeared to soften on Saturday, after Taran spoke with female military cadets and the ministry released a statement acknowledging that the heels were inconvenient.

Taran told cadets at a military institute in Kyiv that he would look into providing “improved, ergonomic” footwear “in the shortest possible time,” though it was unclear if that would be before next month’s parade. He added that senior defense officials would look into improving the quality of undergarments and uniforms for women in the armed forces.

The defense minister also said that if the trial of the “experimental” footwear went well, they could be issued to all female members of the military.

Women have played increasingly prominent roles in the Ukrainian military, especially in the country’s ongoing conflict with pro-Russian separatists in eastern Ukraine.

Kyiv began allowing women to serve in combat units after Russia annexed the Crimean Peninsula in 2014. Women now make up more than 15% of the country’s armed forces, a rate twice as high as when the fighting began seven years ago, Ukraine’s military said recently. More than 13,000 women had received combatant status in the conflict, it said.

In their statement, the three cabinet ministers said female soldiers “have proved their worth not in heels, but with machine guns.”

But even as more women have joined Ukraine’s armed forces, critics say the country has been slow to provide them with proper equipment.

A 2016 report on gender equality in Ukraine found that the country’s female soldiers often “fight wearing men’s uniforms, men’s shoes, which are often uncomfortable and [in the] wrong size.” The study, which surveyed female soldiers, found that gender stereotypes were still common.

Ukraine, which says its percentage of women in the armed forces is among the world’s highest, is not the only country to struggle to adapt to a more inclusive military. The United States began issuing body armor specifically designed for female soldiers in 2020, five years after it opened all combat positions to women.

Maria Berlinska, a Ukrainian activist who was involved in producing the 2016 report, said the outrage over the photos of the female cadets in heels was a “healthy reaction.”

Women marching in heels might “delight” the military commanders in the stands, she wrote on Facebook, but female soldiers were dying the same way as their male counterparts: on the battlefront, in combat boots.

David L. Stern in Kyiv contributed to this report.