Mothers in sister cities: Finding lessons from the pandemic in Germany and Virginia 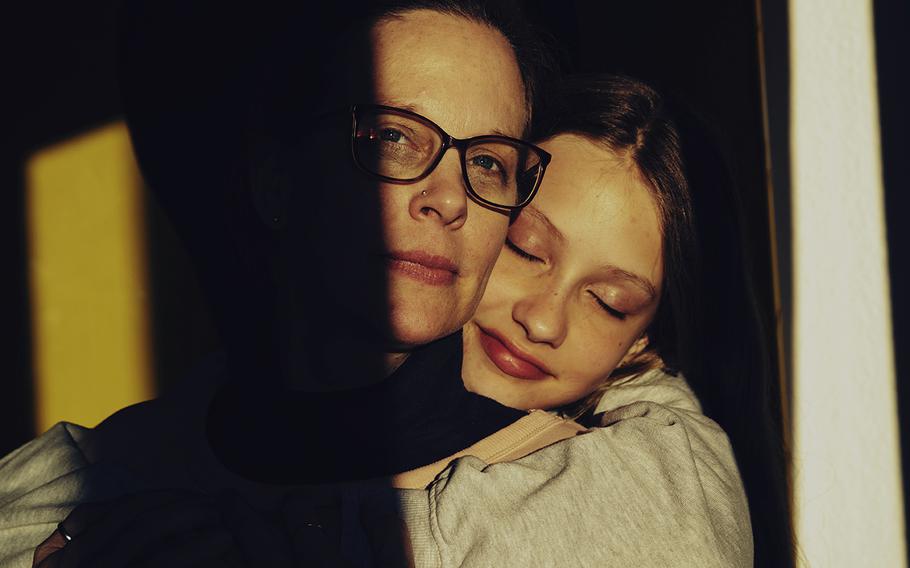 Birgit Brombacher and her daughter Felicia are pictured at their home. (Marzena Skubatz/For The Washington Post )

As schools closed and lives were upended, the coronavirus pandemic brought particular challenges for mothers, including the struggles and accommodations of remote learning for children and managing their own careers.

More than 4,000 miles separate the sister cities of Fredericksburg in Northern Virginia and Schwetzingen in western Germany. For two women, their shared experience reflects the different support systems that helped during the shutdowns. But their stories — as told to The Washington Post — also bring into focus the universal worries about money, family stress and how their reordered lives will find new footing in a world changed by the pandemic.

Their stories, in their words during interviews in April and May, offer two snapshots of countless adaptations to a new global reality. Their narratives have been slightly edited for clarity and continuity. 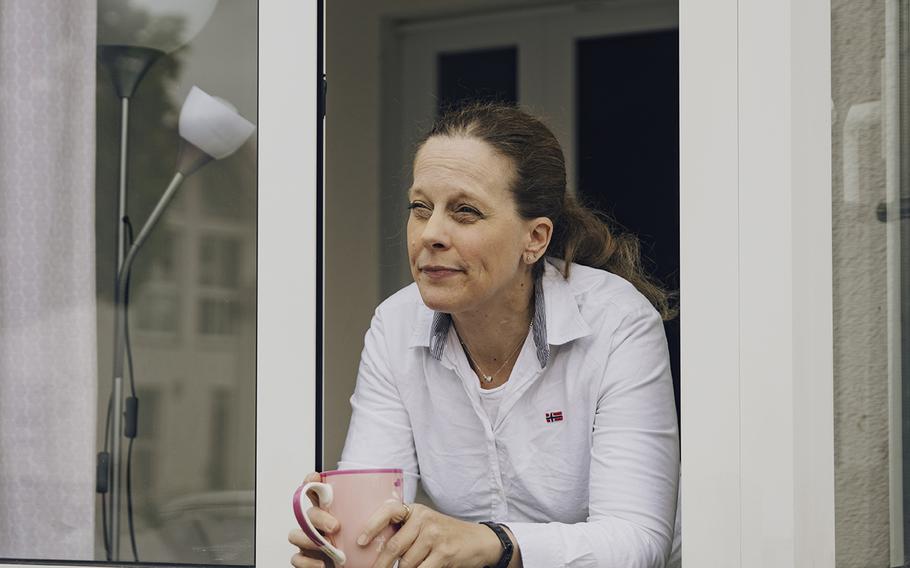 Birgit Brombacher looks out of a window at her home in Schwetzingen, Germany. (Marzena Skubatz/For The Washington Post)

In the beginning, we were all very frightened. Then in March, when they said they would do a lockdown, I couldn’t believe it. And all the schools closed, and we were at home. We were all the three of us in this small flat. I was like, ‘What will the future bring, and how long will this go on?’

We were in a two-room flat: all the day, all the night, with my children. Everything was taking place in my room. And then we had a children’s room, which was the second room.

Maja, my eldest daughter [who just turned 21], sometimes stayed at her boyfriend’s house. But his parents were also high-risk people for the coronavirus and, at the beginning, Maja had to stay in quarantine. His family said: ‘Oh no, not at our house.’ So she came to our place and it was really, really difficult for all of us.

There was an opportunity to move to Schwetzingen and have three rooms. This costs more money. This is a reason I made the decision to take the other job. Before, I was doing all the administration, all the organization at the church kindergartens.

Now, I do administration for Kinder und Jugendhilfe, which is for families in difficult situations. It’s really horrible. These families before the pandemic had problems. Those problems are now plus 1,000. For the children, it’s really dangerous. Here in Schwetzingen, families are well situated.

I knew I would need more income. I moved here and I thought perhaps it might be enough. But after one, two, three months, I had to realize it was not enough. I canceled a lot. I canceled [10-year-old] Felicia’s horse-riding. I canceled all the insurance I had. I get Kindergeld [child support payments] for both children, because Maja is still studying. In all, I get about 480 euros a month [about $586]. Without that, it wouldn’t work out.

I started this job with much enthusiasm. I also saw so many people who really have nothing, and it was my wish to have enough money to give the children a good situation. Felicia is going to private school in September. 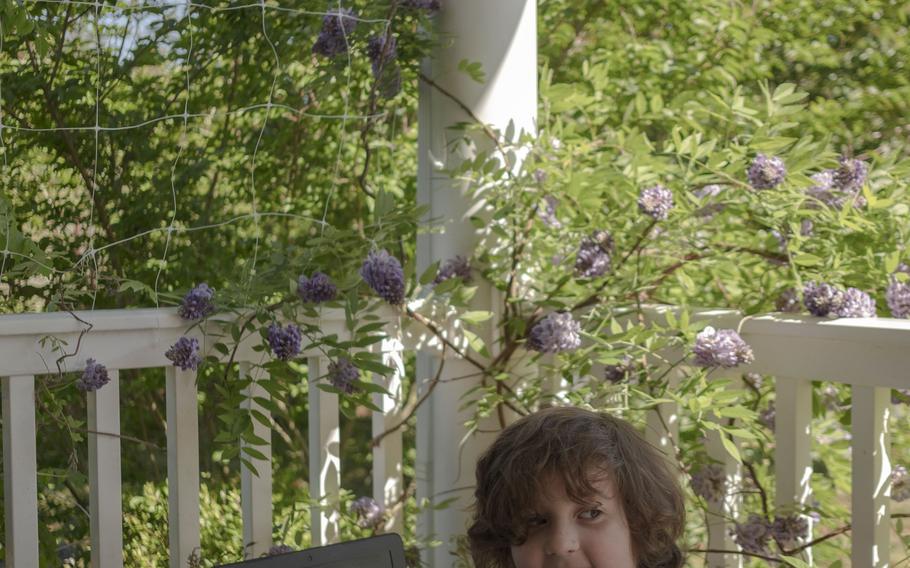 Robert, 6, attends virtual school on the deck of his home in Fredericksburg. (Gabriella Demczuk/For The Washington Post)

So I have two boys. I have Robert, who is in kindergarten. And I have George, who is in third grade. My husband, Jason, works as a [government] contractor. And so he was actually considered an essential worker. So he’s been at work this entire time, whereas we just shut down.

[She breaks off to talk to her son George]: “Mommy’s on the phone and your teacher needs your focus and respect. Turn. Back to your desk. Thank you.”

We had our last our last [Cub Scouts] leadership meeting on the 19th of March [2020], which is a Thursday, and it was during spring break. The following week was Robert’s birthday. Jason, by this point, hadn’t come home because [he] was an essential [worker] at the Pentagon.

We were kind of on our own. And it was Robert’s birthday and [he] just wanted to see his daddy. So Daddy came home, was there on his birthday. And then the very next day, Saturday, I was cooking dinner for the boys. I had been feeling fine. There was nothing wrong with me. And all of a sudden, I popped a 103.4 fever. And I was like, ‘Oh shish kabobs.’ 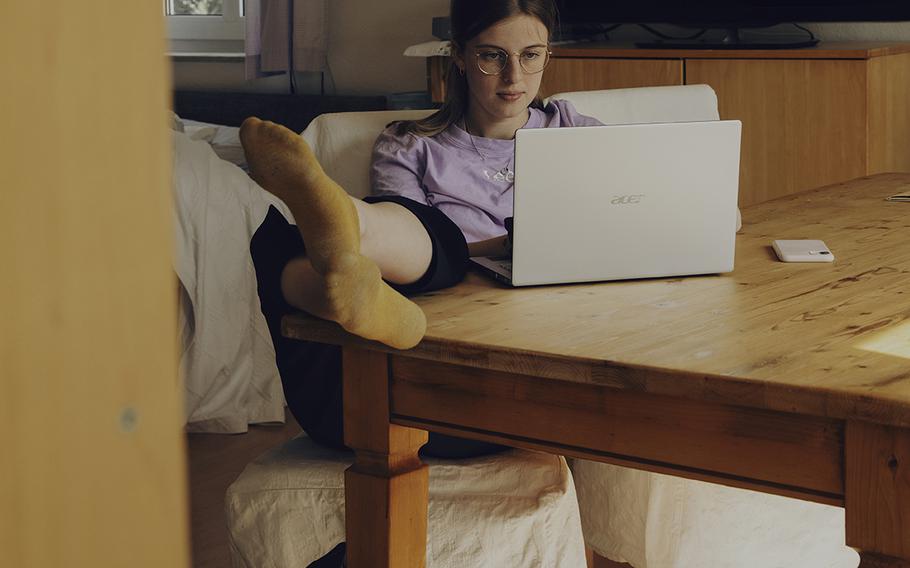 When Maja was at school, I was not a fan of private schools. I thought, why? We had good public schools, but I think Felicia needs this. Last year in the summer break, we had the thing that she didn’t want to go to school anymore. She became kind of depressive after the lockdown.

[Maja’s] grades really improved over the past year. But when you are 20 years old and there’s nothing you can do, it’s hard.

In November, [Maja] got [covid-19], and her boyfriend, too. For three weeks, they were completely knocked out. It was really hard for them.

For the children, it’s not easy. They don’t have vaccinations. And they haven’t seen normal school life for a year. When I think of my kindergarten pupils, those who started this year at school, it’s a disaster, they have to learn how to write.

Now [Felicia is in school] from Monday to Wednesday.

On Thursday and Friday, at the moment, her dad takes betreuungstage [care days]. Normally, before [the pandemic], you had 10 days, as a mom or dad, you could take off from work when your child is ill. The government then decided . . . it was 30 days [for each parent] you could take off with nearly complete salary. They said they have to find solutions for the parents when the children are at home. [Her father] is at home with her and doing home schooling. For Felicia, it’s boring. Before, there was theater, there were musicals, there was action. Now, they are not allowed to do sports, they are not allowed to sing. Dancing is online now, horse riding is difficult online.

There is notbetreuung [emergency school] if you can’t find child care. But you are not forced to use the notbetreuung, you can also use those 30 days.

[Felicia] went to the notbetreuung before the Easter break, but there is one other boy her age and she doesn’t really like him.

Now, at the moment from Monday to Wednesday, she can go to school three days, so [her father] needs to take only two days a week.

And now we made an arrangement with [another] mom. Monday to Wednesday, she picks them up and takes them in the afternoon. Every day, you have to stay flexible. 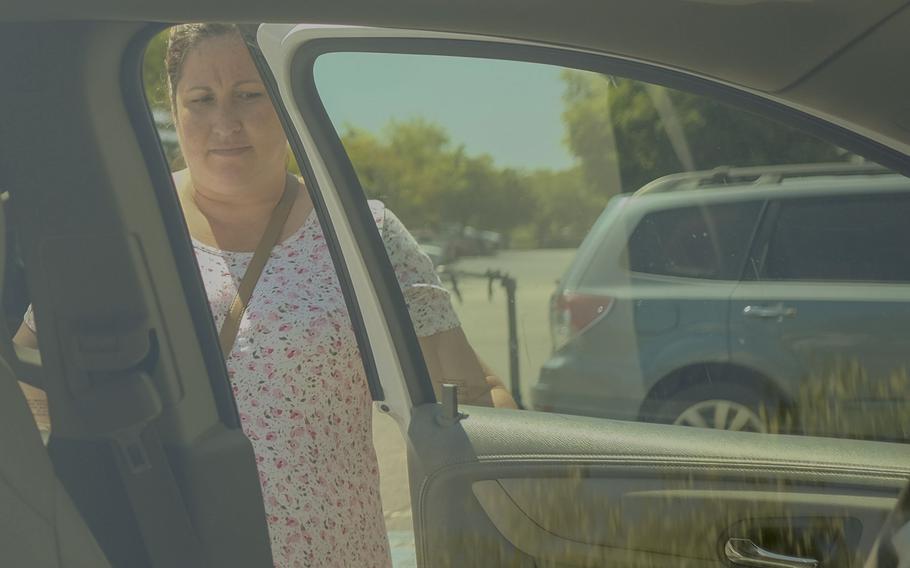 Wendy Latella gets into her car after running errands around Fredericksburg, Va. (Gabriella Demczuk/For The Washington Post )

I had double pneumonia. I tested for covid three times. All three times, it came back negative. My doctor and also the Virginia Department of Health’s doctor both said that they are positive it was covid, but it didn’t test positive.

[Jason] went and stayed with his parents. His parents live in Springfield, [Va.]. Because I was sick and he couldn’t risk being sick. But his parents were also working at the Pentagon, and then the Pentagon approved them both for remote work. And at that point, his parents were like, ‘Well, we have a small house, and we’re older, and if you’re still going in . . . ‘

So he started having to commute from home. At home, he was staying downstairs in the basement at first, and then he moved into the guest room. We had this whole thing where I met him on the porch and he would go and take off his shoes and all that stuff, and he would go straight inside to the bathroom where he would shower and change into clean clothes I had set up. And he’d go into the bedroom and he would hang out there all night and I would bring him food and put it outside and walk away.

And I was cleaning, cleaning, cleaning. We did that for five months. We did that until [the public health experts] finally decided they knew more [about the coronavirus transmission]. Because you have to understand, everybody else was just sitting at home. He couldn’t. But we couldn’t risk, you know - I was still getting over the pneumonia. It was just because that’s what was happening and no one knew anything.

If my husband hadn’t been working, it would have been completely devastating to our family. I work in the television and film industry. I do a lot of producing, training, videos, commercials. One hundred percent, without question, [the pandemic has taken a toll on my income].

We’re very big into hiking and camping. So, I mean, most of the things that we do don’t cost a lot. And I hate saying it like this, but the way that I budget our stuff . . . my [income] was mostly used toward the fun things. My husband’s [income] comes in and it’s really allocated toward the bills.

Anything that I was making was put toward future trips or out-to-eat dinners and stuff, because otherwise we eat at home, we don’t go out a lot. We personally know four people who did die from covid. All in the [television and film] industry.

Sometimes I think people . . . need more patience. The government, the politicians, they can try to save people from the coronavirus, but they can’t do everything for everyone.

So I see that they decide things and they try to do their best. I think you can work with the situation and try to make the best of it. I trust in them. I really trust in them. I think about it like: What would I do? And I wouldn’t know what to do either. And I’m happy that they are acting and trying to save people.

I’m from Atlanta and I’m one of six kids. I have a sibling who believes the whole thing’s a hoax. The little area that I’m from, there are a lot of naysayers out there. I have a lot of people on mute on Facebook. Four of my five siblings live there in Atlanta. So there’s tons of cousins constantly running around, and everyone goes to a different school. There’s a lot of chance to get [the coronavirus]. My mother had a liver transplant back when I was in college. So she’s one of those people that has been on the complete and utter [shutdown]. My mom has [now received] her shot. So she says when everybody else gets their shot, then we can all be friends again.

So that’s kind of what we’re waiting on. So it has been, yeah, it feels like 10 years. This last year has been something.

My youngest son’s birthday [last year] - he had planned his own birthday party - and it was going to be a Pokémon ninja birthday party. It was really hard to tell my 4-year-old at the time, ‘No, you don’t get the birthday party this year because there’s this horrible thing going on’ because you can’t really tell a 4-year-old that. So it was heartbreaking because when you have plans, and you have your hopes up on something like Robert with his birthday party and then it just hard stops. It’s hard to wrap your head around it. But then you’re sitting there - and we played Monopoly three times this week, we play Chutes and Ladders, I got to walk my neighborhood with my kids all five days this week - and it kind of starts changing your perspective.