Biden praises US troops and families during speech in England 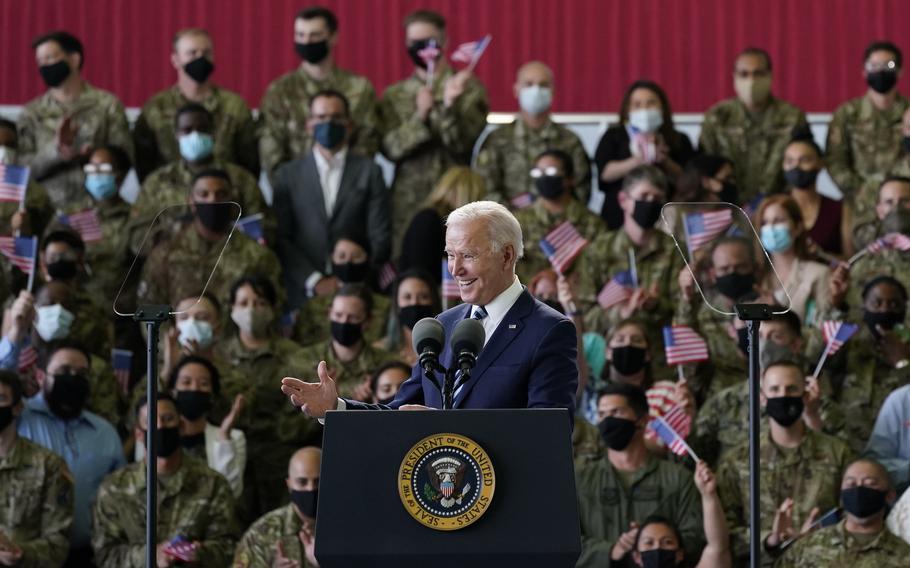 During President Joe Biden’s first overseas tour as commander in chief, he sent a clear message Wednesday that U.S. service members and their families are key to strengthening relationships at home and abroad.

“You are the solid steel spine of America around which alliances are built and strengthened,” Biden told U.S. troops and their families, speaking in a hangar on RAF Mildenhall, England.

Biden’s speech reflected the overall theme for his trip: “America is here to lead with strength.”

The UK visit — the first stop on his eight-day trip — comes ahead of a meeting next week with Russian President Vladimir Putin in Geneva and with leaders at NATO headquarters in Brussels.

“I’m meeting with Putin to let him know what I want him to know,” Biden said to roaring applause. “The United States will respond in a robust and meaningful way when the Russian government engages in harmful activities. That there are consequences for violating the sanctity of democracy.”

Among the matters Biden is expected to address with Putin are recent cybersecurity attacks directed at U.S. businesses and government agencies. Officials believe Russia was behind those attacks.

Biden will convene with NATO allies Monday to discuss security issues in Europe and the progress of the alliance’s withdrawal from Afghanistan. Since he took office, Biden has talked up the value of NATO, which faced frequent criticism from former President Donald Trump on issues like defense spending. During Biden’s first visit as president to NATO headquarters, the allies are likely to project a unified front.

“This summit will be a strong demonstration of trans-Atlantic unity, of Europe and North America standing together in NATO,” NATO Secretary-General Jens Stoltenberg said Tuesday after meeting with Biden at the White House. “Because we are stronger, we are safer together in a more unpredictable world.”