Finance ministers for the G-7 advanced economies announced an accord that could reshape the tax obligations of multinational corporations around the world.

The deal reached at the G-7 meeting Saturday by Canada, France, Germany, Italy, Japan, the United Kingdom and the U.S. is a major breakthrough for the Biden administration’s efforts to enact a floor on the taxes paid by corporations worldwide.

Treasury Secretary Janet Yellen has been adamant that the U.S. needs to work with international counterparts to prevent nations from being played off one another by firms seeking lower tax obligations.

“The G-7 Finance Ministers have made a significant, unprecedented commitment today that provides tremendous momentum toward achieving a robust global minimum tax at a rate of at least 15 percent,” Yellen, who led negotiations on behalf of the U.S., said in a statement. “That global minimum tax would end the race-to-the-bottom in corporate taxation and ensure fairness for the middle class and working people in the U.S. and around the world.”

Under the deal, the U.S. is expected to give up some taxing rights on overseas profits of U.S.-based tech giants.

The deal enables countries to tax 20% of the profits of “the largest and most profitable multinational enterprises” that have profit margins of at least 10%.

While the agreement does not explicitly name the tech companies, the line is a nod to the push by European countries to levy taxes on the operations in their countries by firms such as Apple and Amazon, which are headquartered in the U.S. but reap significant revenue abroad.

The Europeans insist that it is unfair for the internet behemoths to collect revenue in their countries without paying more in taxes.

The Biden administration is seeking to raise the domestic corporate tax rate from 21% to 28% to pay for its spending priorities, such as infrastructure and education.

Republican critics have charged that the move would lead American firms to relocate abroad, hurting domestic jobs and investment. The international tax agreement helps the White House argue that it can lift domestic tax rates without pushing multinationals abroad, because under the agreement they would still face a minimum level of taxation.

Republican lawmakers have been skeptical about granting European countries additional taxing rights over the tech giants. The debate between Europe and the U.S. over taxing digital firms led to several major trade clashes under the Trump administration, with America imposing retaliatory tariffs over European attempts to tax the tech firms.

But the U.S. changed course after last year’s presidential election, with Yellen telling the Group of 20 nations in February that the U.S. has dropped demands to allow firms to opt out of new global digital taxes. That helped pave the way toward Saturday’s deal.

The deal starts what is expected to be a long and arduous process toward changing international tax laws. Negotiators hope to advance progress toward a binding agreement at a meeting of leaders of the “Group of 20” in Italy in July — but there are a number of sticking points. The deal faces opposition from countries, including Ireland, which rely on revenue by acting as tax havens, and the new U.S. tax rules have to be approved by Congress.

International treaties require passage by a two-thirds majority in the Senate, meaning GOP votes will be necessary to ratify many of the changes pushed by the Biden administration. Republicans have criticized the Biden effort, with Idaho Sen. Mike Crapo, the top Republican on the Senate Finance Committee, warning that the U.S. “should not be willing to accept an agreement that continues to target American companies.”

“Republicans are unlikely to go along with this — you’re ceding tax authority and doing so in a way that disproportionately hurts U.S. companies,” said Donald Schneider, who served as chief economist to Republicans on the House Ways and Means Committee.

It is unclear how much support the new tax floor has in parts of the European Union and other low tax countries. Irish finance minister Paschal Donohoe has said he has “significant reservations” about the U.S. plan and said the country will maintain its 12.5% corporate tax rates for years to come.

The Biden administration initially floated a 21% global minimum tax but that rate was eventually lowered to 15%. The lower rate will make it easier for countries to join the accord but may reduce its effectiveness. If the U.S. rate is raised to 28% but the global minimum tax is 15%, firms may still have strong incentives to move their operations overseas. In remarks at the close of the G-7 meeting, Yellen stressed that developing countries have limited ability to respond to economic crises such as the pandemic and that the world needs more tax revenue from the wealthiest corporations.

“G-7 economies came together to agree the post-pandemic world must be fairer, especially with regard to international taxation,” Yellen said. “We need to have stable tax systems that raise sufficient revenue to invest in essential public goods and respond to crises and ensure that all citizens and corporations fairly share the burden of financing government.”

Others downplayed the significance of the accord. The countries that are part of the G-7 accord all already have corporate tax rates above 15%, said Kyle Pomerleau, a tax expert at the American Enterprise Institute, a conservative-leaning think tank.

“It’s rather simple that countries that have statutory tax rates of 15 percent agree that other countries should also have that,” Pomerleau said. “This is step one, and from Yellen’s perspective that’s good, but it’s step one of 1,000.”

Global tax negotiations have been ongoing at the G-7 and the Organization for Economic Cooperation and Development for the better part of a decade. But some experts said the speed with which the U.S. made major progress Saturday was striking nonetheless.

Alarm has grown among international tax experts about declining taxation. The average corporate tax rate globally was about 40% in 1980, falling to about 23% in 2020, according to the Tax Foundation, a conservative-leaning think tank. As much as $700 billion in taxes from the world’s largest multinational firms was stashed in tax havens in 2017, research by a team of economists found.

“It’s an early and quick win for Yellen and Treasury, and it’s sort of remarkable,” said Steve Rosenthal, a tax expert at the nonpartisan Tax Policy Center, a think tank. “This has been lingering for years and years — though of course Trump did not believe in multinationalism — and to start these negotiations in January and have a tentative agreement in June is pretty impressive.”

Others stressed the obstacles that loomed ahead. Douglas Holtz-Eakin, a Republican former director of the Congressional Budget Office, has raised concerns about whether the U.S. will give up too much of its tax base in search of a deal with Europeans. He also stressed how many questions were left unresolved by Saturday’s statement, including the structure of the 15% minimum tax and how it would function or be approved.

“It’s easy to set at a table and agree, ‘Yes we should have a 15 percent minimum tax.’ It’s another thing to pass through the U.S. Congress, and the U.K. parliament, and everyone else,” Holtz-Eakin said. “We can agree on the concepts — I’m sure — but will we actually have a law enforced in every country? 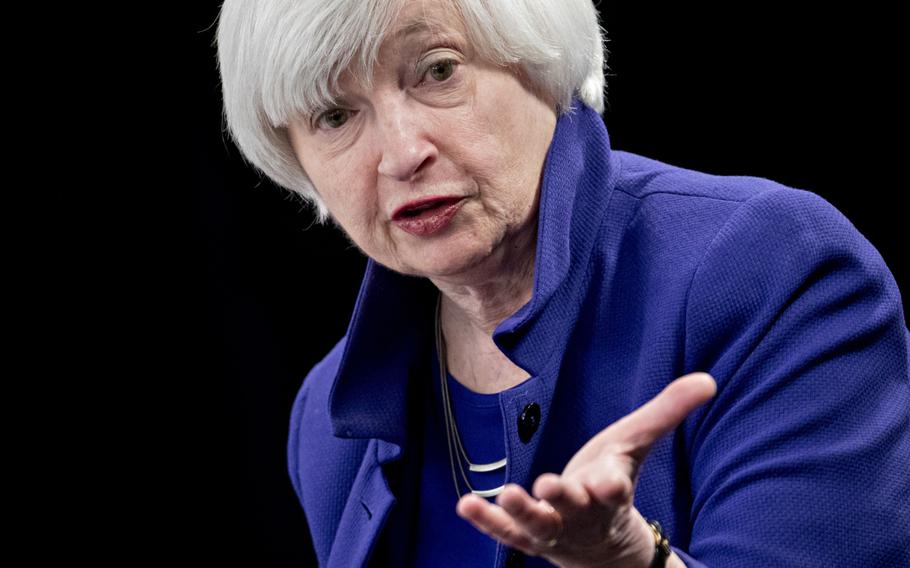 Janet Yellen, chair of the U.S. Federal Reserve, speaks during a news conference in Washington, D.C., on Dec. 13, 2017. Yellen has been adamant that the U.S. needs to work with international counterparts to prevent nations from being played off one another by firms seeking lower tax obligations. (Andrew Harrer/Bloomberg)