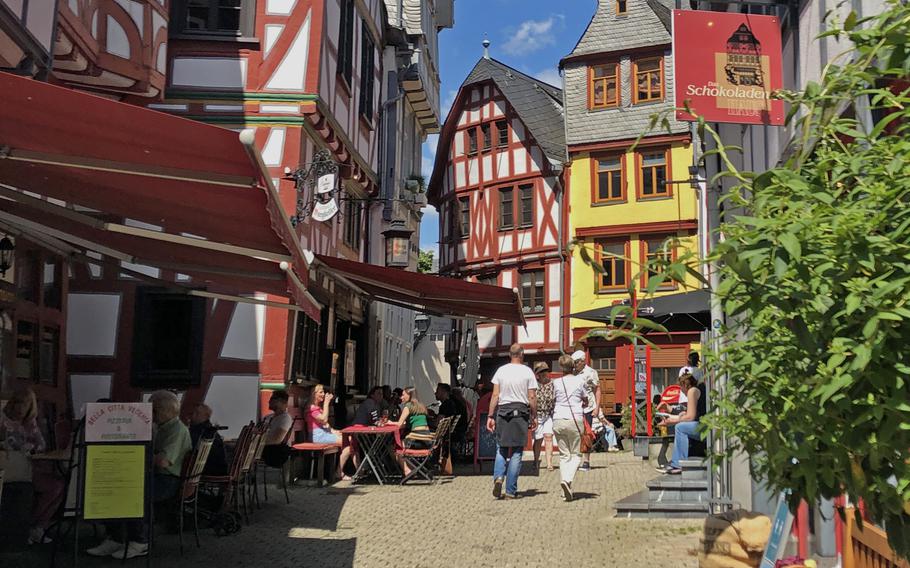 Buy Photo
Restaurants and shops open up again to customers in Limburg an der Lahn, Germany, on May 30, 2021. Coronavirus restrictions have eased in much of the country as incidence rates have fallen in recent weeks. (Erik Slavin/Stars and Stripes)

The state of Rheinland-Pfalz, home to tens of thousands of U.S. service members, reported Wednesday a weekly average incidence rate of about 32 new cases per 100,000 people, a sharp drop compared to recent weeks.

On Wednesday, the improved numbers allowed most of the state to open hotels to guests and indoor dining to patrons who can either show a negative test or proof of vaccination. Diners eating outdoors at restaurants do not need a test. Swimming pools may also open at 50% capacity, according to the state rules.

Entertainment and cultural venues, including cinemas, are allowed to admit up to 100 people indoors and 250 people at once outside, the rules stated Wednesday.

“Since in past days the incidence rate in Rheinland-Pfalz has declined significantly, we can continue to go this way carefully but also with confidence,” state governor Malu Dreyer said in a statement.

The state government in Mainz said it expects to ease restrictions more in the second half of June. This would include opening flea markets and fairs, which have been closed for several months.

The situation is similar in other German states where U.S. bases are located.

In the southeastern state of Baden-Wuerttemberg, which hosts numerous U.S. installations, the incidence rate Wednesday was about 37 new cases per 100,000 people. In Stuttgart and the surrounding region, the rate was 43 per 100,000 people.

In Hesse, home to U.S. Army Europe and Africa headquarters in Wiesbaden, the incidence rate moved up slightly to 46 on Wednesday. A nighttime curfew was lifted in the city of Wiesbaden, where the rate stands at about 73. The number of cases there is higher than many cities in the region but much lower than a month ago.