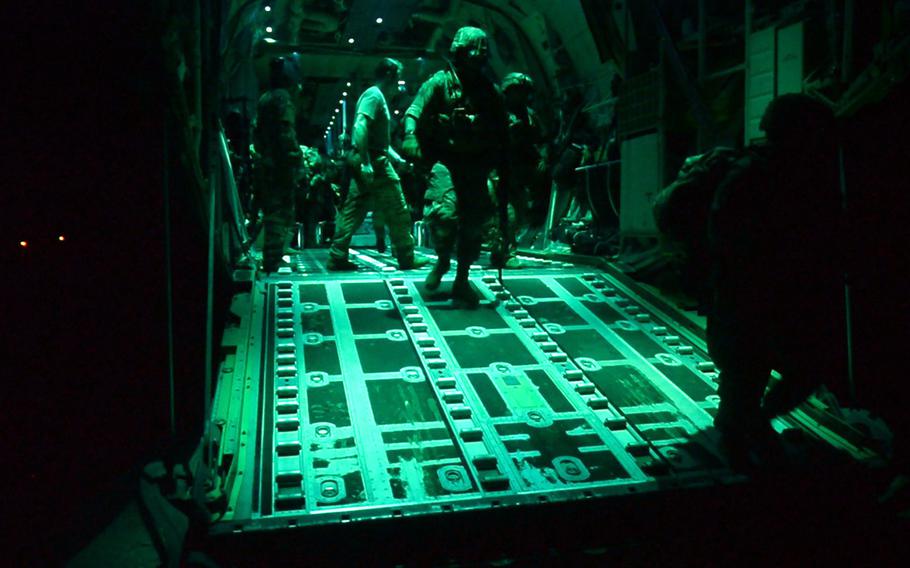 U.S. Army soldiers, assigned to the East Africa Response Force, 101st Airborne Division, exit a C-130J Super Hercules, at Manda Bay Airfield, Kenya, on Jan. 5, 2020. Defense Secretary Lloyd Austin has ordered an independent review of the attack that day by militants that killed three Americans and wounded at least three others at the small U.S. base. (Sean Carnes/U.S. Air Force)

Austin, who recently completed an initial review of U.S. Africa Command’s investigation into the Jan. 5, 2020 attack, said he wants a deeper look into the deadly ambush at the small Manda Bay outpost.

“An independent review will provide added insight, perspective, and the ability to assess the totality of this tragic event involving multiple Military Services and Department of Defense components,” Pentagon spokesman John Kirby said in a statement Monday.

Austin directed the Army to appoint a four-star general to review the AFRICOM investigation. Army Gen. Paul Funk, head of the Army’s Training and Doctrine Command, was selected to lead the probe and serve as the authority for “any appropriate disciplinary actions related to the attack,” Kirby said.

Kirby said Austin wants to ensure a full examination of the contributing factors that led up to the event and “that appropriate action is taken to reduce the risk of future occurrence. The families impacted deserve nothing less.”

The incident forced AFRICOM to dispatch a quick reaction force based out of Djibouti to reinforce the base. Security measures at Manda Bay were bolstered in the aftermath of the attack.

The military site in coastal Kenya supports U.S. operations in Somalia, where al-Shabab fighters have waged an insurgency for more than a decade. The al-Qaida–aligned militants primarily target Somalia’s government and military but occasionally launch high-profile assaults in neighboring states, including Kenya.

The insurgents stormed the Manda Bay airfield at dawn with indirect and small-arms fire. About a mile down the road, other militants fired on Camp Simba, a section of the base where U.S. forces are stationed, The Associated Press reported.

Marines from Camp Simba initially responded to the attack site and fought back. But it took all day for Kenyan and U.S. security forces to finally repel the militants. At least five U.S. aircraft were destroyed in the clash and one was damaged during the attack. Six contractor-operated civilian aircraft were also damaged, AFRICOM said at the time.

The attack in Kenya was the deadliest for U.S. forces in Africa since four soldiers were killed in another ambush by militants in Niger in 2017, which eventually resulted in disciplinary action against numerous commanders. Air Force Col. Chris Karns, AFRICOM spokesman, said a “great deal of rigor” was put into the initial investigation, resulting in immediate fixes and improvements.

“We are confident in the report’s findings and remain committed to ensuring fixes and improvements in Kenya and across the continent,” Karns said in a statement.

“The goal has always been to determine facts, ensure improvements, and do everything possible to fully understand the situation and take appropriate action,” Karns added. “U.S. Africa Command has remained committed to this since the moment of the attack and we fully support the additional independent review directed by the Secretary of Defense.”

Kirby said the Pentagon will not make any further public announcements about the investigation until it’s completed.

“We will provide updates to the family members impacted by this tragic attack and will ensure that Congress is appropriately informed when the review is completed,” Kirby said.