‘No double taxation’: Berlin weighs in on local German practice targeting US troops 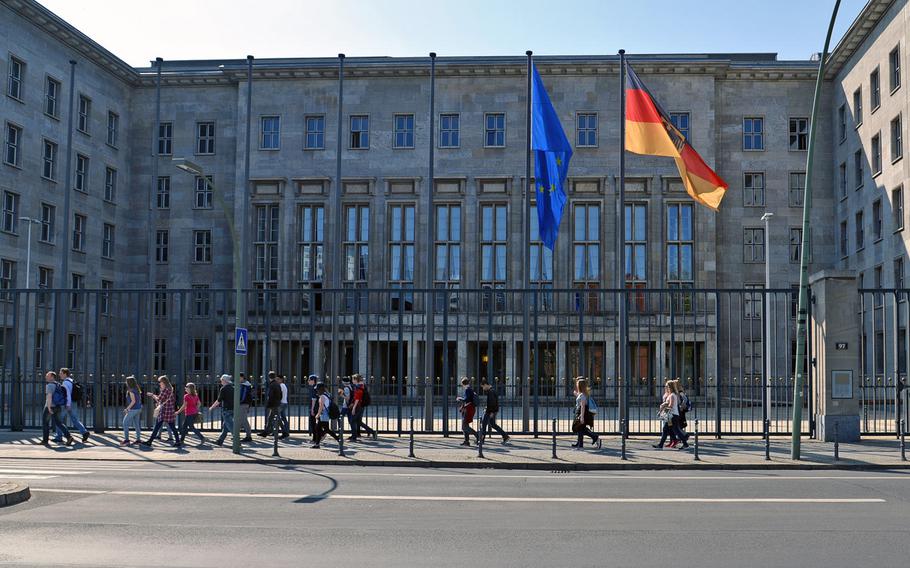 The Federal Finance Ministry building in Berlin. The ministry said this week that the treaty allowing U.S. forces to operate in the country protects American troops from being forced to pay German income taxes. (Michael Abrams/Stars and Stripes)

STUTTGART, Germany — The treaty that allows U.S. forces to operate in Germany protects them from having to pay German income taxes, the Federal Finance Ministry said this week, in a statement that puts localities imposing huge tax penalties on military families at odds with Berlin.

“The Federal Government takes the view that, in a uniform interpretation and application of the relevant provisions of the agreement between the parties to the NATO Status of Forces treaty … there will be no double taxation,” the Finance Ministry said in a statement.

The ministry did not elaborate on what, if any, steps it was prepared to take to bring local tax offices into compliance on an issue that the U.S. government says violates Germany’s collective defense obligations.

The Finance Ministry also stopped short of rendering an opinion on pending cases in regions where U.S. troops have faced hardball tactics from tax collectors, resulting in six-figure tax bills for some military families.

“Going forward, the matter will continue to be examined in consultation with the U.S. Embassy,” the Finance Ministry said, declining to put a timeline on when action could be taken.

In December, U.S. officials met with their counterparts in Berlin to lodge an official complaint with Germany’s Foreign Office, which directed federal finance officials to look into the issue. The move came after Stars and Stripes highlighted the difficulties faced by military families who have been forced into lengthy legal battles or been pressured to pay hefty tax penalties.

Some German tax authorities have claimed that income tax exemptions spelled out in the SOFA treaty are void if a military member has motivations for being in Germany beyond solely their job.

German authorities have built hundreds of tax liability cases against troops, Defense Department civilians and contractors around circumstances such as being married to a German, extending tours, owning property or sending children to German schools.

To avoid taxes, a person must prove “a willingness to return” to the U.S., even though tax authorities have continued to pursue cases against some people after they returned stateside. The policy also puts German tax clerks in the position of guessing the intentions and future lifestyle decisions of troops, which critics have said is arbitrary and legally problematic.

The majority of cases are connected to military members in the Landstuhl-Kusel area, near Ramstein Air Base, but cases have also been reported in Kaiserslautern, Stuttgart and Wiesbaden.

The issue has gotten the attention of some lawmakers in the U.S., who raised concerns with the Pentagon.

Former Acting Defense Secretary Christopher Miller said in a Jan. 7 letter to Pennsylvania Republican Rep. Mike Kelly that the U.S. government was working to ensure the “appropriate tax exemptions for U.S. personnel covered under the SOFA and its supplementary agreements.”