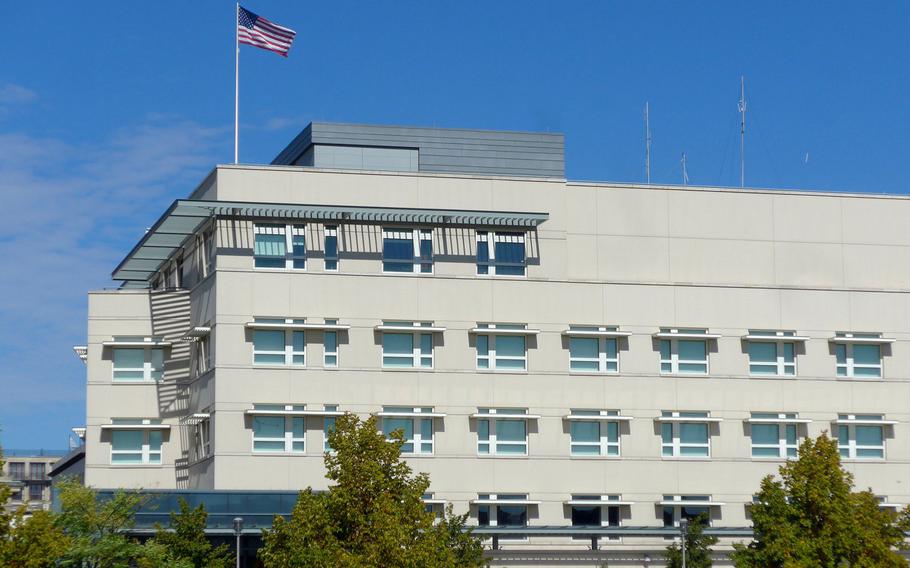 The American flag flies over the U.S. embassy in Berlin, Germany. The U.S. government has held talks with officials in Berlin to try to stop attempts by some German finance offices to collect income tax from American forces, a practice the military says violates an international treaty. (Michael Abrams/Stars and Stripes)

STUTTGART, Germany — The U.S. government has intervened to try to stop German finance offices from imposing income taxes on American forces in the country, a practice the military says violates a long-standing international treaty.

The Pentagon, along with State and Treasury departments, have put the U.S. Embassy in Berlin in charge of leading efforts to resolve the issue, which has caused financial devastation for some military families who have been hit with six-figure bills by local tax authorities.

“The German ministry of foreign affairs agreed to take the issue to the federal ministry of finance. We’re now waiting to hear back from them,” said Col. Joe Scrocca, U.S. Army Europe and Africa spokesman.

The German government is in close contact with the U.S. Embassy regarding the subject, the Finance Ministry said in an emailed statement Monday.

The problem came to light last year when Stars and Stripes investigated aggressive tactics used to force troops and military civilians to pay German income tax, despite a clause in the Status of Forces Agreement stating that they are exempt.

“The aim of this engagement, and any necessary follow-up engagements, is to secure the appropriate tax exemptions for U.S. personnel covered under the SOFA and its supplementary agreements,” former Acting Defense Secretary Christopher Miller wrote in a Jan. 7 letter to Rep. Mike Kelly, R-Pa.

“We believe that some German tax authorities have adopted an incorrect interpretation of the NATO Status of Forces Agreement (SOFA), resulting in the improper taxation of some US personnel,” Miller wrote.

At the center of the problem is the claim by some German authorities that SOFA tax protections are void if a person is in Germany for reasons other than just their military job.

Being married to a German, extending tours, owning property or sending children to German schools are among the factors that have been used by German officials to build tax liability cases.

To avoid taxes, a person must prove “a willingness to return” to the U.S., even though tax authorities have continued to pursue cases against some people after they returned stateside.

Critics say the policy relies on guesswork by tax clerks and lacks any clear legal basis.

Military families who have been ensnared by German tax collectors have complained that they have been left to fend for themselves in lengthy legal disputes.

Air Force Master Sgt. Matthew Larsen, who is married to a German and has been targeted for months by the Landstuhl-Kusel tax office, said the U.S. government intervention raised his hopes that the matter could be resolved, but added that he was still angry that it has dragged on for so long and affected so many Americans.

“I’d like to be hopeful,” Larsen said. “But every time I hear about another case, I get infuriated because of the fact that this is still continuing, and they are getting more aggressive. When is this going to end?”

Hundreds of troops, Defense Department civilians and contractors have been targeted by local tax offices over the past few years. Most of the cases are linked to Americans living in the Landstuhl-Kusel area, near Ramstein Air Base, but cases have also been reported in Kaiserslautern, Stuttgart and Wiesbaden.

The problem has existed for years, but initially focused mainly on contractors. Critics say German authorities became emboldened after their demands that Americans pay taxes went unchallenged and expanded their campaign to target troops and DOD civilians.

In November, the State Department sent a cable to the U.S. Embassy in Berlin, directing it to engage with the Ministry of Foreign Affairs on the matter.

In a meeting the following month between American and German officials, the foreign ministry agreed to involve the federal finance office, Scrocca said.

“They agreed to move it forward,” he said. “We don’t want to say anything that would disrespect them in any way, but we think ... the language of the SOFA is clear. We just have to agree on the interpretation.”