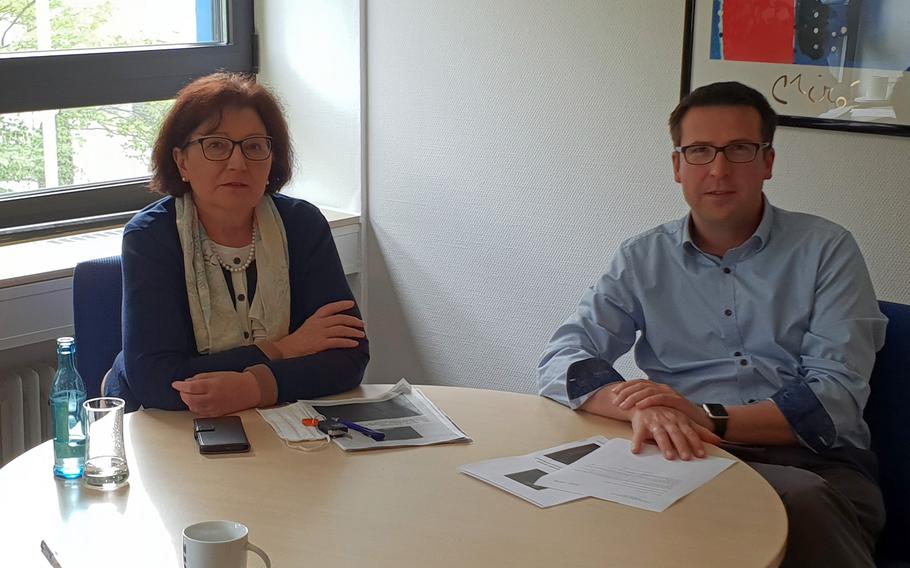 Marlies Kohnle-Gros, left, and Marcus Klein of the German Christian Democratic Union political party have launched a probe into the taxation of Americans in Germany, they said in May 2020. (Marcus Kloeckner/Stars and Stripes)

KAISERSLAUTERN, Germany — Regional lawmakers in Germany are investigating why a finance office near Ramstein Air Base has stepped up efforts to collect income tax from American troops and military civilians, possibly breaching an international treaty that governs U.S. forces in the country.

Marlies Kohnle-Gros, a state parliamentarian in Rheinland-Pfalz, and fellow Christian Democratic Union lawmaker Marcus Klein are investigating whether there has been an official change in policy regarding how German tax offices treat U.S. personnel. They’ve also asked how many U.S. military members have been targeted for taxation and how much money has been seized over the past five years, they said in an interview last week.

The two lawmakers became aware of the issue after Stars and Stripes spotlighted attempts by German authorities to collect income tax despite the NATO Status of Forces Agreement, which, among other protections provided to members of the military, civilian employees and dependents stationed on orders in NATO partner countries, prevents them from being taxed in the host country and at home simultaneously.

As of late April, the Landstuhl-Kusel tax office, which covers Ramstein and is the focus of their probe, said nearly 400 Americans with connections to the military in the area faced hefty German tax bills.

The German lawmakers have requested information from the Kusel-Landstuhl tax office and expect a response later this month.

As an international treaty, the SOFA trumps German tax law, said Andreas Kindler, a spokesman for the Steuerberatung tax consultancy, which operates in the Ramstein area. The firm has received numerous calls in recent months from Americans targeted by German tax authorities, he said.

Historically, the SOFA safeguarded U.S. personnel from double taxation, but in recent years some German tax offices have interpreted the treaty differently.

Some local tax officials have asserted that SOFA protections no longer apply if a person has “special ties” to Germany, such as being married to a German, extending military tours, owning property or sending a child to a German school.

Some Americans say they took none of those steps, yet still face tax bills upwards of nearly $200,000, along with legal fights to avoid penalties. The situation has affected active duty personnel, military civilians and contractors.

Most cases so far have been in the greater Kaiserslautern area, home to the largest overseas U.S. military community, but attorneys and tax officials say the issue has also popped up elsewhere — from Wiesbaden and Heidelberg to Stuttgart, which is home to U.S. European Command.

U.S. Army Europe, which is in charge of SOFA matters for the military in Germany, has registered complaints with the German Foreign Ministry about the way some tax offices are interpreting the treaty. USAREUR said in April it is coordinating with the State Department to try to fix the situation.

“There are regular measures in place to inform the force and special attention will be placed on this in the coming weeks and months, especially in the Landstuhl, Kusel area,” Col. Joe Scrocca, USAREUR spokesman, said in a statement last month.

Regional tax officials have sought taxes dating back 10 years from Americans and pursued U.S. personnel after they had returned to the U.S., Kindler said.

Germany’s highest tax court, based in Munich, may have to step in to resolve the row, he said. In addition, gray areas in the SOFA that have been seized upon by tax officials need to be eliminated, he said.

For instance, tax officials in Rheinland-Pfalz have argued that Americans need to show “a willingness to return home” if they want to preserve their tax-exempt status, Kindler noted.

But there is no legal definition or standard for “willingness to return home,” he said, accusing tax clerks of making up the rules as they go along.