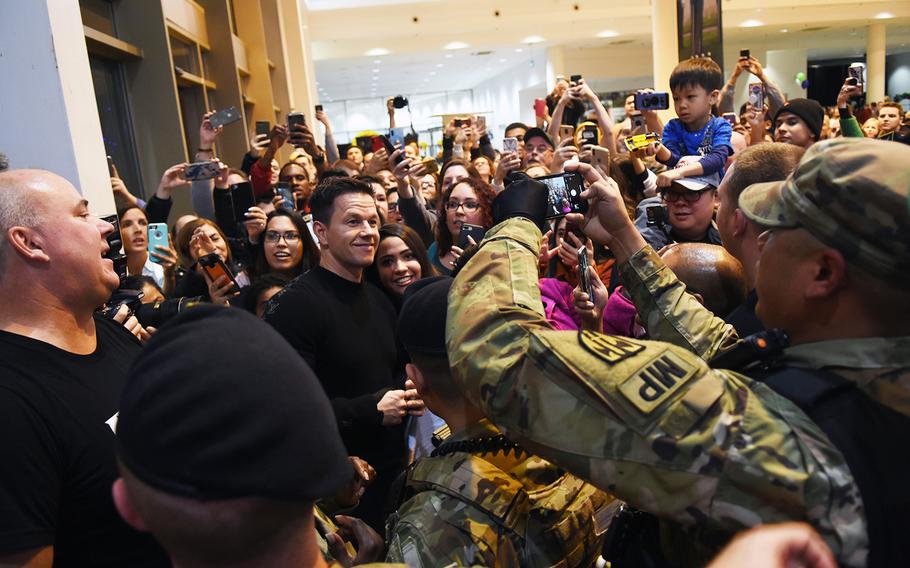 Actor Mark Wahlberg greets the crowd and poses for photos inside the food court at Ramstein Air Base, Germany, on Dec. 15, 2019. Mark Wahlberg and his brothers, Paul, a chef, and Donnie, an actor, founded the restaurant in 2011. The Ramstein location will open early next year and will be the first on a U.S. military base. (Jennifer H. Svan/Stars and Stripes) 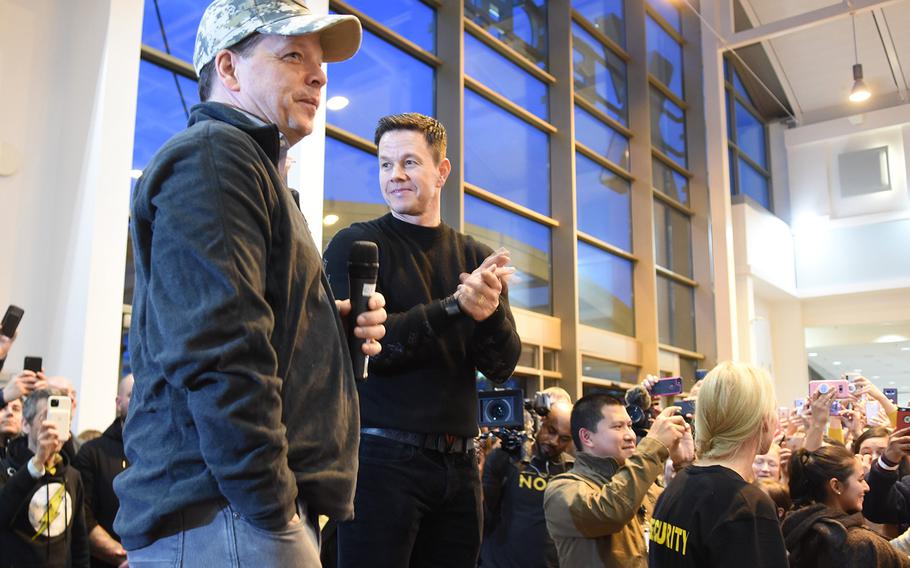 From left, Paul Wahlberg, a chef, and his brother, actor Mark Wahlberg, stand in front of a large crowd inside the food court at Ramstein Air Base, Germany, where a new Wahlburgers is scheduled to open in early January. The brothers visited the base Sunday, Dec. 15, 2019, to meet service members and their families and to talk about the restaurant. (Jennifer H. Svan/Stars and Stripes) 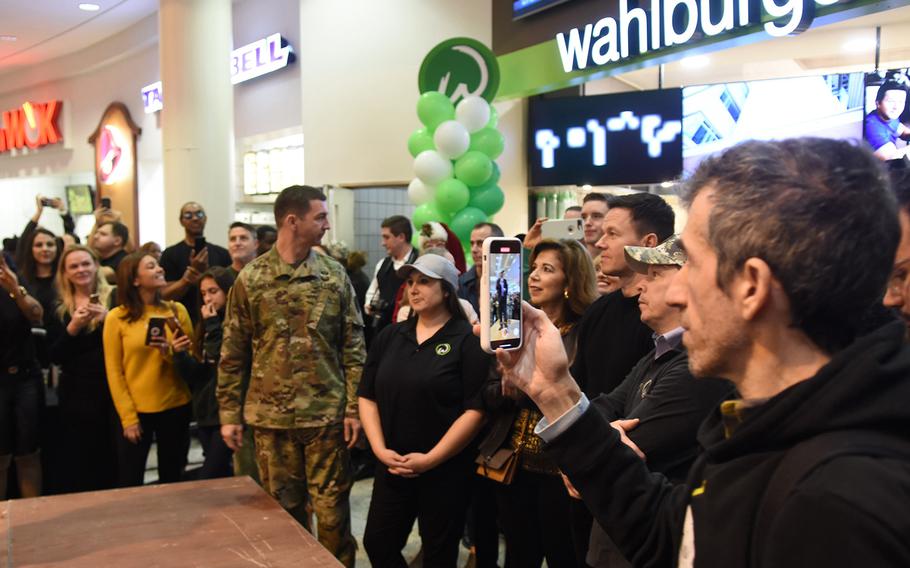 Actor Mark Wahlberg and his brother, Paul, a chef, stand in the middle of a large crowd in front of their fast-casual burger joint, Wahlburgers, set to open in early January at Ramstein Air Base, Germany. The brothers visited with service members on Sunday, Dec. 15, 2019. (Jennifer H. Svan/Stars and Stripes) 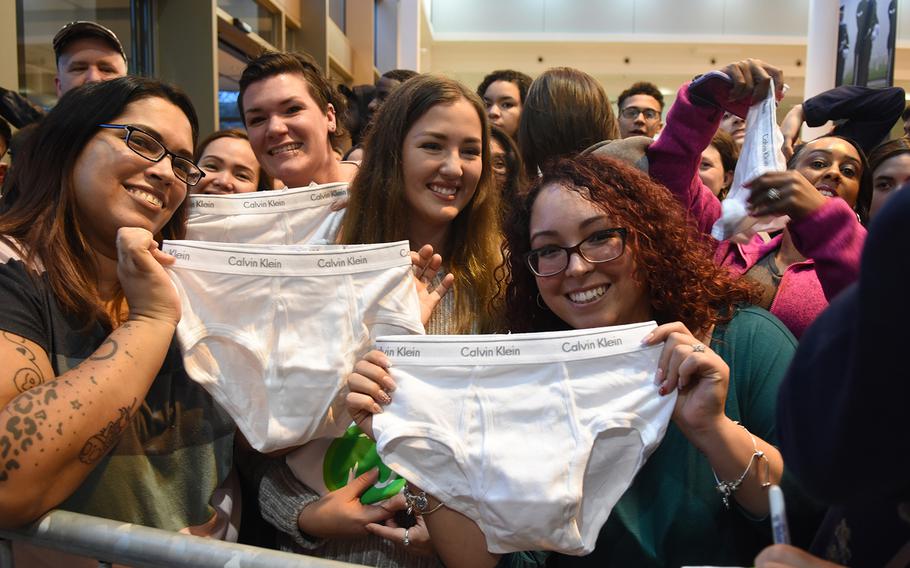 Military spouses Kristy Valentin, left, and Jennifer Spitznogle, right, hold up white Calvin Klein underwear they were hoping to get actor Mark Wahlberg to sign during his visit Sunday, Dec. 15, 2019, at Ramstein Air Base, Germany. Wahlberg famously modeled the underwear in his youth. (Jennifer H. Svan/Stars and Stripes) 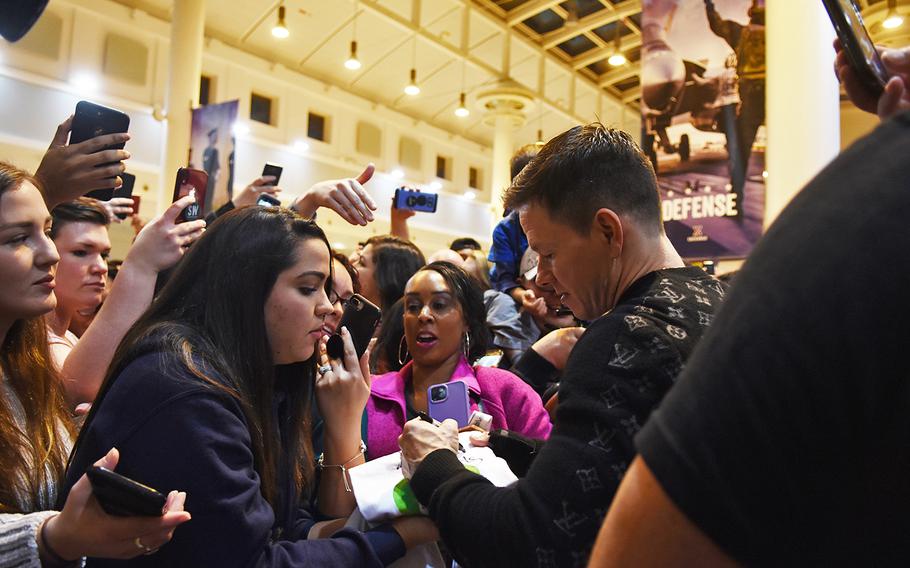 Actor Mark Wahlberg signed a T-shirt during his visit to Ramstein Air Base, Germany, on Sunday, Dec. 15, 2019. (Jennifer H. Svan/Stars and Stripes)

RAMSTEIN AIR BASE, Germany — Actor Mark Wahlberg and brother Paul Wahlberg, a chef, thrilled thousands of service members and their families Sunday during a visit to celebrate the upcoming opening of their Wahlburgers restaurant.

The fast-casual burger joint is slated to open about the second week in January, the brothers said. It’s replacing Johnny Rockets and will be the first Wahlburgers at a U.S. military installation.

Mark Wahlberg, one of the highest-paid actors in Hollywood, was the big draw. Many in the crowd vied to get selfies with him and autographs.

“It truly is an honor for us to be here and provide this experience for you guys,” Mark Wahlberg told the crowd.

The actor arrived about 4:30 p.m., but the food court began filling before noon for the event.

“I just want to say, ‘Thank you, from the bottom of my heart,’ ” he said. “You guys make the ultimate sacrifice and I really appreciate that.”

Samples of some of the Wahlburgers menu items were passed out, including a turkey burger and a hamburger with bacon.

Paul Wahlberg said the Ramstein location will start with a smaller menu than that of the stateside locations while they learn how to work in a smaller space and to procure ingredients overseas.

“It’s counter service, not a full-service restaurant,” Paul Wahlberg said, “so you come up and put your order in.” The restaurant will have some dining space and a beer-and-wine license, he said.

The restaurant is a partnership with the Army and Air Force Exchange Service. Col. Scott McFarland, AAFES Europe, Africa and Southwest Asia commander, said the Exchange is looking at adding another Wahlburgers in Europe, with the location to be announced.

Joint Base Lewis-McChord also is getting a Wahlburgers in early 2020.