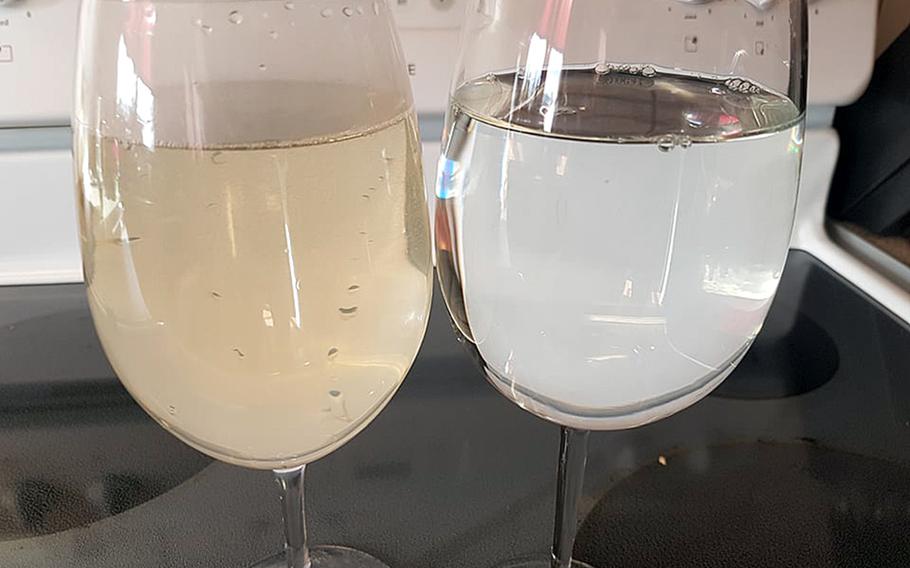 Hot and cold tap water in a photo taken on March 7, 2018, at a unit at Wenzel Housing, Baumholder. According to a resident, the brown color showed up after the pipes were treated to kill Legionella bacteria. (Courtesy photo)

KAISERSLAUTERN, Germany — Baumholder officials are taking new steps to remedy the garrison’s brown drinking water, perhaps the most visible problem identified by soldiers and families at the Army base’s housing and barracks in recent years.

A new water quality task force convened last week to determine where and how the water — which base officials earlier this year said was safe to drink — is being tinted to colors varying from off-yellow to murky brown.

Col. Jason Edwards, who took command of the Rheinland-Pfalz garrison on July 11 and convened the task force, became aware of the water issue both from public works officials and from families on Facebook.

“We had brown water that was posted on a Facebook site by a spouse. When I first saw that, I looked at it in a sense that, ‘How would I feel if I was the person having brown water?’” Edwards said. “Now whether it was medically sound with no contaminants — it doesn’t look pleasant. So the idea was ... we need to address the fact that there is brown water in the pipes and get after it.”

Dependents of soldiers stationed at Baumholder have repeatedly taken pictures of glasses filled with brown water, as well as other housing deficiencies, and posted them online.

Katrina Shepard, who lived at Baumholder with her husband until August, said the brown water was “disgusting and unacceptable.”

“Nearly everyone I know, including ourselves, in Baumholder paid out-of-pocket for a (water delivery service) because they didn’t feel safe drinking it,” said Shepard, who left Baumholder when her husband was transferred.

Shepard said her 4-year-old daughter was plagued with sores all over her body when they were stationed at Baumholder.

The sores cleared up after they left the post, Shepard said. Her daughter was recently tested and shown to have an allergic reaction to mold, another problem base officials have discussed at public town hall meetings during the past year.

Concerns about the water at Baumholder were heightened in March after German-mandated testing revealed high levels of Legionella bacteria, forcing authorities to decontaminate about 20 housing units. Base doctors said at the time that no one had tested positive at a military medical facility for Legionnaires’ disease, a severe type of pneumonia. 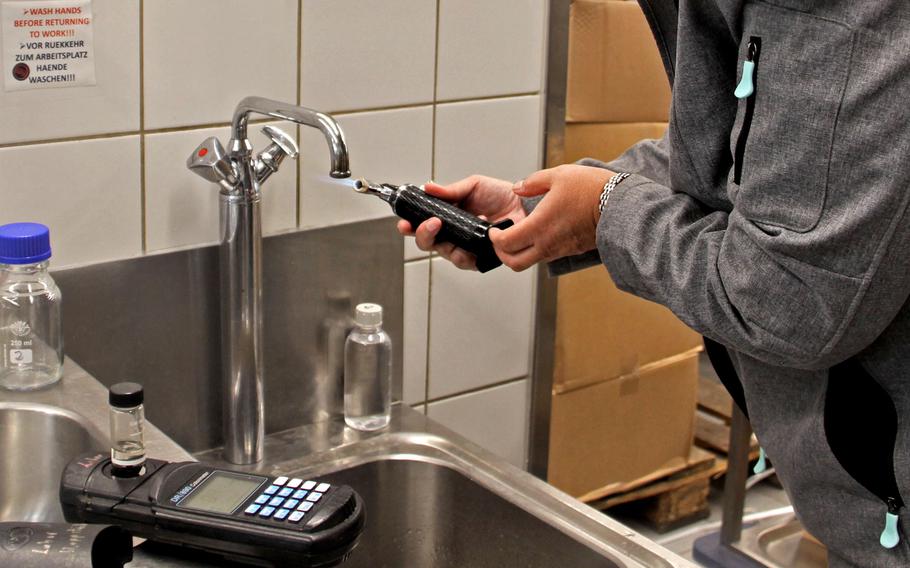 Although the colorless, odorless Legionella bacteria was not related to the brown water, the finding was seen by some residents as an indication that the military did not take the clean water issue seriously.

“I have a feeling nothing will remedy it except complete remodeling, renovation of the plumbing systems,” Shepard said. “We’ve been let down so much in Baumholder, it’s hard to have faith in what is being promised anymore.”

“We are continuing to test and meet requirements, this is just an extra effort,” Edwards said. “This is an authentic effort to make sure (the public) understands that we are trying to give them the best water we possibly can have.”