BAUMHOLDER, Germany — At least 20 buildings in Baumholder, including two family housing units and six barracks, had to be decontaminated after officials found high levels of the water-borne bacteria that causes Legionnaires’ disease.

Although base doctors say that no one at the base has tested positive for Legionnaires’, a severe type of pneumonia, the potential for illness has forced soldiers to leave their barracks to shower and left base residents concerned for their safety.

The disease is characterized by flu-like symptoms that appear within 10 days of exposure to the bacteria. Severe cases lead to hospitalization and 10 percent of cases end in death, according to the Centers for Disease Control and Prevention.

Army officials outlined the risks the bacteria pose to the public and the efforts to decontaminate the buildings on Wednesday at Baumholder’s Wagon Wheel Theater.

Workers are doing everything necessary to protect the health of everyone living in the base, said Col. Keith Igyarto, commander of U.S. Army Garrison Rheinland-Pfalz.

“We have the highest quality water. We ensure that by testing it several times a day,” Igyarto told Stars and Stripes. 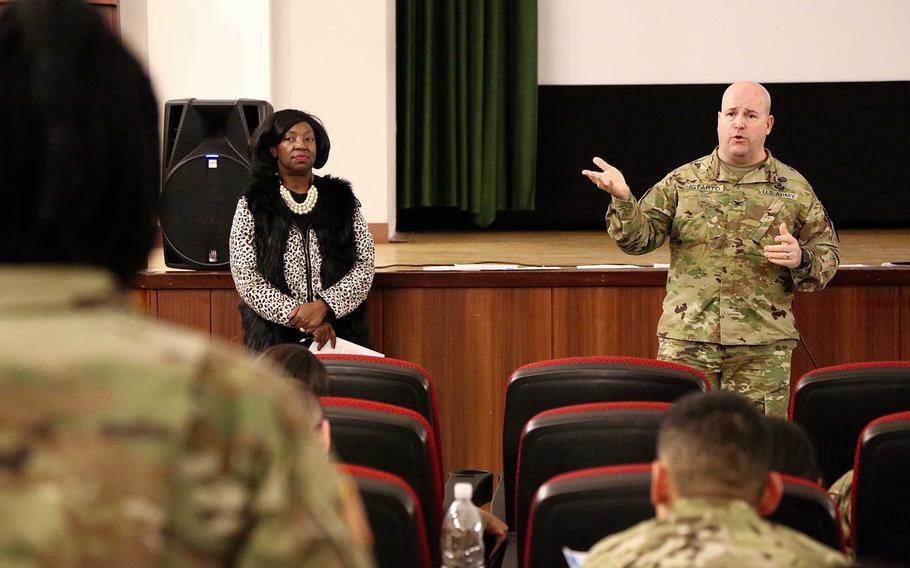 Col. Keith Igyarto, commander of U.S. Army Garrison Rheinland-Pfalz, explains the process to eliminate Legionella bacteria from the barracks' water systems to troops on Wednesday, March 7, 2018. The soldiers live in barracks at Baumholder that tested positive for Legionella bacteria, which causes Legionnaires' disease. Will Morris/Stars and Stripes (Will Morris/Stars and Stripes) The Army tested 124 buildings in the Baumholder military community for Legionella bacteria in February to comply with German requirements. Twenty buildings had levels high enough to require decontamination, though six buildings were unoccupied. Ninety buildings were either not contaminated or had contamination levels so low they required no action.

The rest tested inconclusively and will have to be retested.

After discovery of the bacteria in five buildings in Baumholder’s Smith Barracks, soldiers living in buildings 8211, 8225, 8226, 8234 and 8235 were instructed to shower at the base’s athletic facilities.

Residents in one contaminated family housing unit, building 8024, were given keys to other buildings for showering.

Families were also allowed to stay at a hotel at government expense during the cleaning process.

Cleaning involves flushing out pipes with water heated between 150 and 158 degrees Fahrenheit.

Filters have also been placed on showers to strain out the bacteria if it returns. The base is now awaiting test results for final confirmation the bacteria were eliminated.

The disease was identified in 1976 when 130 people were hospitalized and 25 died after attending an American Legion conference in Philadelphia. Legionella bacteria was discovered in the hotel’s air conditioning system.

In most instances, the contaminated buildings at Baumholder were cleaned within the past week.

The cleaning procedure left some residents worried about further contamination and led to an outpouring of dissatisfied comments on social media.

Residents of family housing units posted photos they said were of water that came out of the tap brown after the cleaning process. Army officials said the water may be unsightly, but it is safe and should disappear after leaving the tap running.

Lisa Smith, an Army wife in living in one of the buildings that tested positive for the bacteria, said she thinks the danger is being downplayed. “They are doing a hard sell to show it is safe,” she said.