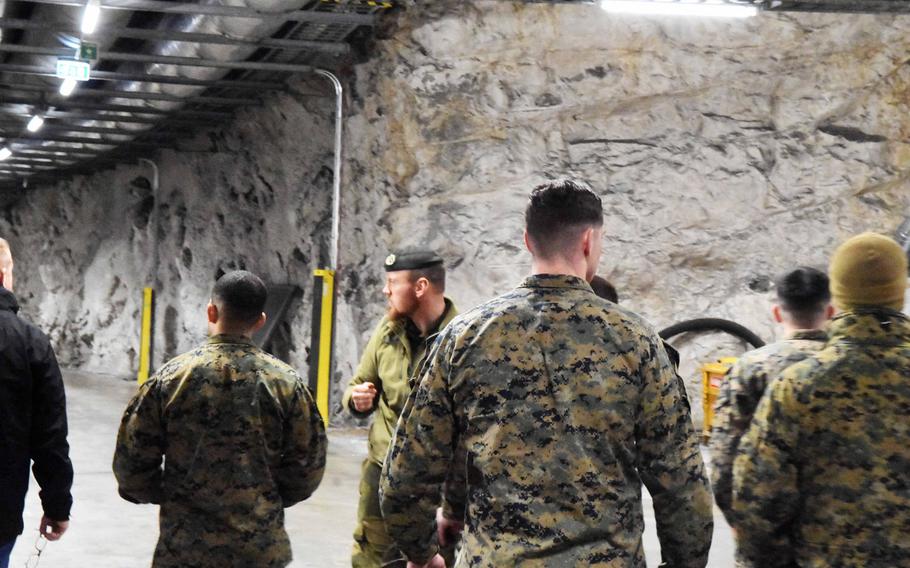 Marines are shown the inside of one of the Marine Corps Pre-Positioning Norway caves in the Trondelag region of northern Norway, Friday, Feb. 2, 2018. (Martin Egnash/Stars and Stripes)

HELL, Norway — The giant caves in these fjordside mountains pack enough firepower for 4,600 U.S. Marines and are built to withstand the first few days of a hypothetical World War III.

The several hundred feet of rock would most likely protect the hidden weapons stashes from a nuclear missile attack.

This stockpile of armor and guns — managed by Marines living near a frozen town named Hell — isn’t the scene of a post-apocalyptic action movie or the next sequel to the “Fallout” video games.

The cave system here is part of the Marine Corps program to store vital equipment in areas of strategic interest.

The Marine Corps Pre-Positioning-Norway caves began in the mid-1980s, during the height of the Cold War. Ever since then, the Marines have periodically moved heavy equipment into the area.

“The first time you see one of these caves, it’s pretty wild,” said program spokesman Maj. Thomas Stona. “It is pretty (science fiction-like). But the warehouses to hold this much equipment would be massive, so using ‘in-rock’ facilities like this actually makes a lot of sense. Once you blow the hole into the ground, these caves essentially last forever.” 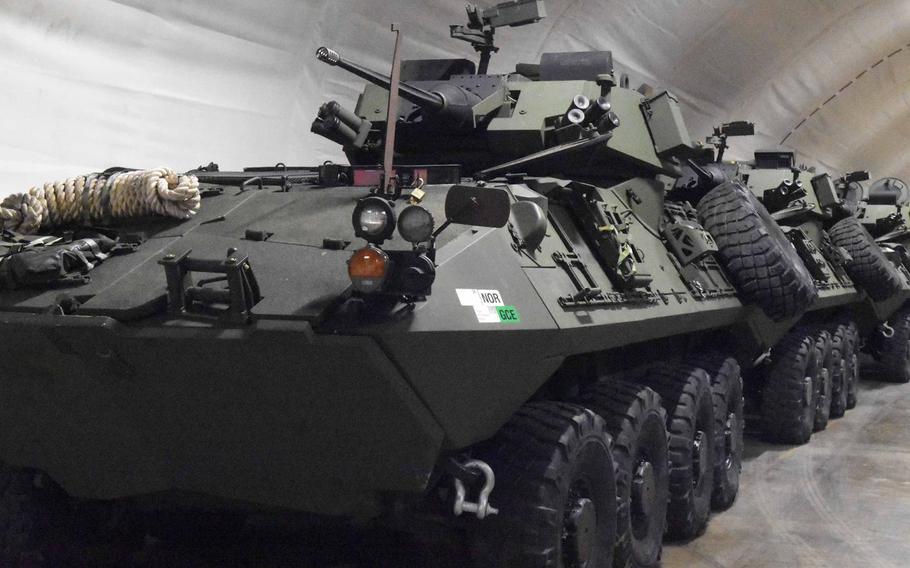 Marine LAV-25s stored inside of one of the Marine Corps Pre-Positioning Norway caves in the Trondelag region of northern Norway, Friday, Feb. 2, 2018. The Defense Department Inspector General found that some equipment isnt being properly stored and maintained in Europe. (Martin Egnash/Stars and Stripes) 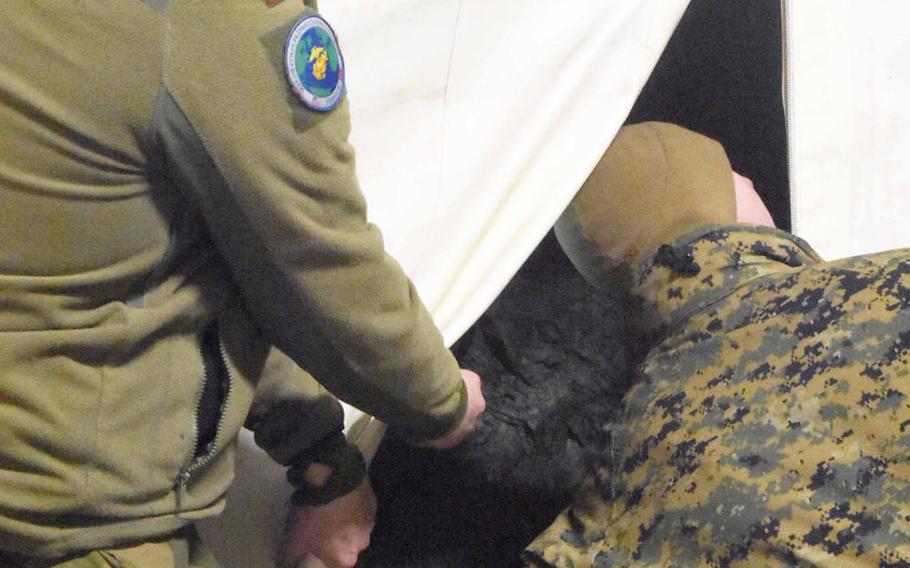 Norwegian army Lt. Frode Gipling shows Marines the bare rock of one of the caves used for the Marine Corps Pre-Positioning Norway program in the Trondelag region of northern Norway, Friday, Feb. 2, 2018. (Martin Egnash/Stars and Stripes) 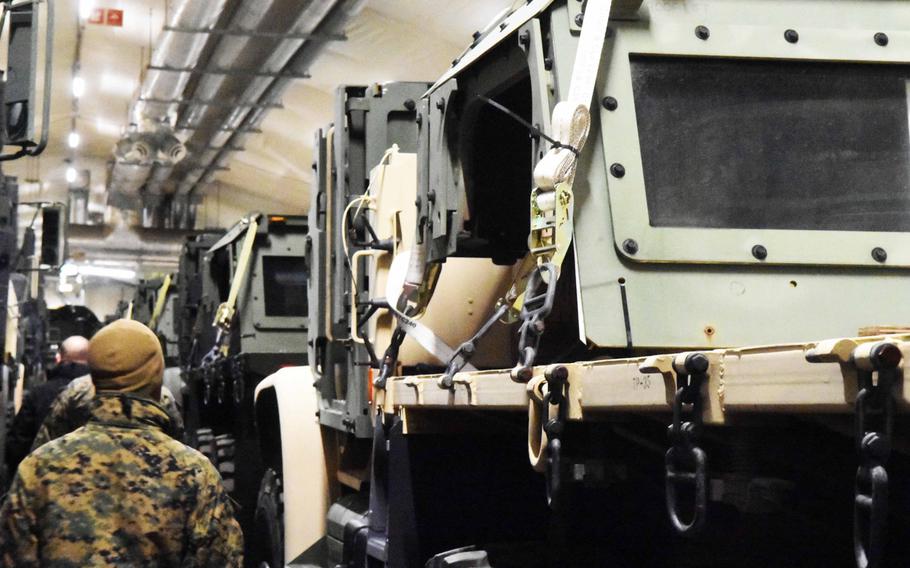 Various Marine trucks and equipment are stored inside one of the Marine Corps Pre-Positioning Norway caves in the Trondelag region of Northern Norway, Friday, Feb. 2, 2018. (Martin Egnash/Stars and Stripes)

The caverns of combat gear, which only a few years ago could have been regarded as a relic of the Cold War, have taken on new strategic significance because of concerns about a more aggressive Russia.

In 2016, the Corps reached an agreement with Norway to host rotational Marines in six-month increments.

Having the equipment in Norway cuts down on response time for any type of emergency contingency, Stona said.

“If the balloon was to go up, or we wanted to deter a force somewhere, it would take weeks for this equipment to move here from Camp Lejeune (N.C.),” he said. “But it’s already at or near its intended point of use, so all that would need to happen is for Marines to fly over from Lejeune, which they can do pretty quickly, and deploy on this equipment.”

Inside the caves are rows filled with items like LAV-25 armored vehicles, M1A1 Abrams tanks, 155mm Howitzers and cold-weather gear.

“The equipment inside the caves represents a whole cross section of everything the Marine Corps has,” Stona said. 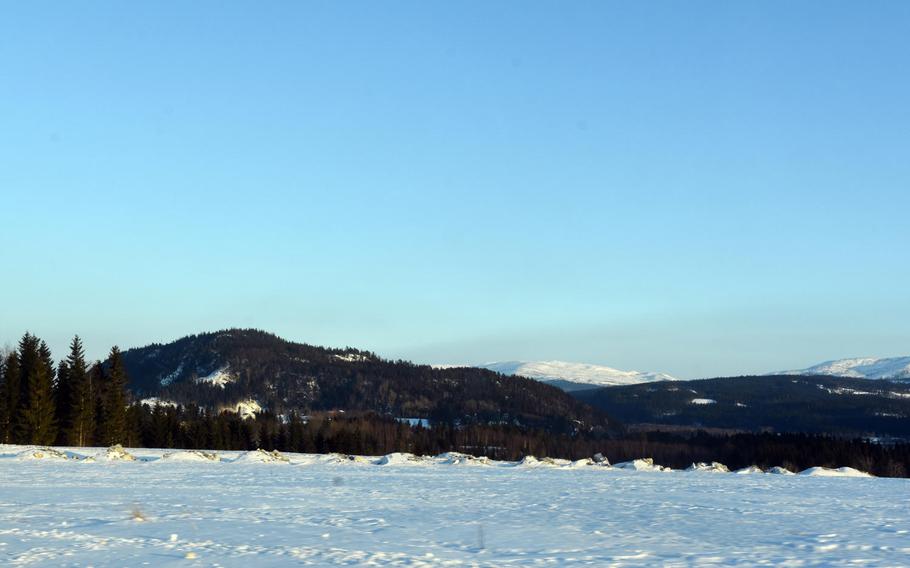 The Marine Corps stores vehicles and equipment inside caves in six of the mountains in the Trondelag region of Norway, Friday, Feb. 2, 2018. (Martin Egnash/Stars and Stripes)

The caves contain enough food and bullets to stand up a Marine expeditionary brigade and support them for several weeks of combat.

“This program is how Marines go to war,” pre-positioning officer Lyle Layher said.

During peacetime, the gear is available for Marines around the world to use for training.

“The purpose of the sites is not for training, but having the equipment here saves a lot of money and time that would otherwise be spent transporting equipment from the United States,” Stona said.

There are six caves the Marines use for pre-positioning equipment in Norway. Each was blasted into a mountain in the Trondelag region by the Norwegian military.

“When the program began, the Cold War was still on,” Stona said. “Russia being a nuclear-capable adversary, the idea was to provide an area capable of withstanding a nuclear strike.”

Norway still pays half the cost of maintaining the equipment inside the caves, which makes it cheaper for the U.S. to store equipment here than it would be back home, Stona said.

“This program is a tangible part of the relationship between the Marines and the Norwegian military,” he said. “It’s a symbiotic relationship. They get a U.S. presence in their country and we get a reduced cost of storing equipment.”

For the Marines who work in the caves or withdraw equipment from them, the experience is like no other.

“The caves are one of the coolest things I’ve ever seen,” said one of the Marines who had set eyes on the tunnels for the first time.

And the vast amount of equipment and facilities inside the caves left even more Marines awestruck.