With housing allowances cut off, some Germany-based Reservists cry foul 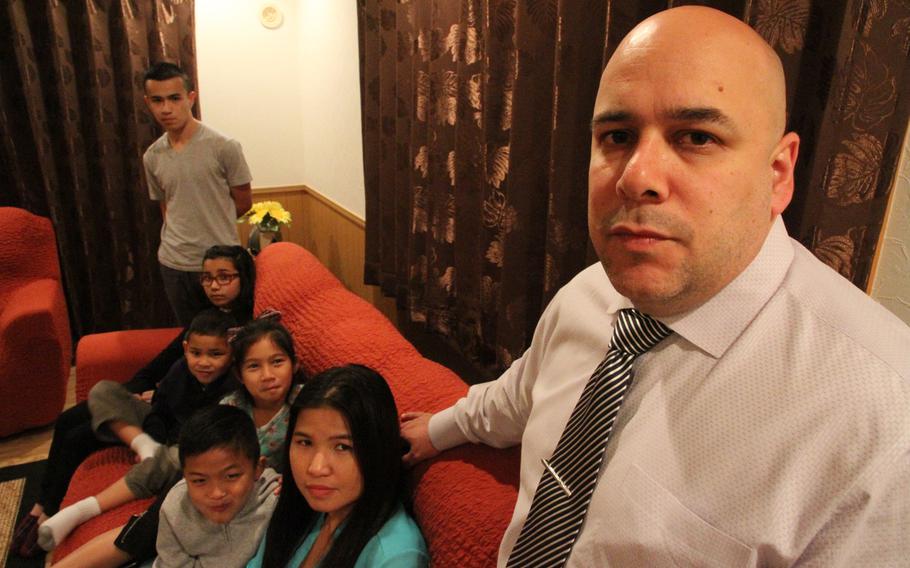 Retired Marine Chris Garcia, seen here with his wife, Natalie, and their 5 children, was promised housing allowance when he was offered a job on Okinawa. After more than 2 years on the job, Garcia has been notified that he was given the benefit in error and that he would be responsible for refunding more than $100,000 in back rent and utilities. ()

STUTTGART, Germany — When Sgt. 1st Class Dennis Nickens, an Army Reserve soldier living in Kaisersalutern, was called up to active duty in 2008 his orders were clear: Mobilize to Stuttgart for an unaccompanied tour with U.S. European Command.

That meant receiving a housing allowance for his family residence and another for an apartment at his new duty station in Stuttgart. In May, everything changed when Nickens received word from the Army that he was no longer eligible for the housing subsidy to pay his rent in Kaiserslautern because of a new Army interpretation of military regulations. In addition, the Army wanted its money back, all $95,000 of it.

“This is total craziness. Whoever made this decision should be fired,” said Nickens, who is among a small, but potentially growing number, of soldiers who face the loss of a housing allowance and possible indebtedness.

Now, Nickens and similarly affected Europe-based soldiers, along with overseas military policy experts, are crying foul over the Army’s sudden decision to upend a practice that’s been in place, in Germany, for at least a decade.

What this means for other Army Reserve troops in the U.S. and others scattered around the world remains unclear. The Army did not respond to a series of questions seeking clarification on its new policy, whether it is being applied beyond Germany, how many people could be affected worldwide and whether the Army is now compelled to seek collection on housing allowance payments awarded to former reserve troops in years past.

“Cases involving these dual payments will require investigation both of the circumstances and of the process,” said Lt. Col. Justin Platt, an Army spokesman at the Pentagon, in a written statement. “No collections have occurred at this time. The Army takes this issue seriously and will proceed to resolve this issue [in] accordance with applicable regulations and statutory requirements.”

For years, Army Reserve troops in Germany have received a housing allowance to cover the rent at their home of record when they are called up to active duty at locations too far to make the daily commute.

However, U.S.-based Army personnel officials at Human Resources Command in Fort Knox, Ky., have reinterpreted the Joint Federal Travel Regulations vicinity rule governing housing allowances and now are asserting that a soldier lives in the same “vicinity” of his place of residence if that soldier is deployed anywhere in the country he or she resides. For example, if a Reserve soldier is living in Berlin, and is activated some 400 miles away in Kaiserslautern, that soldier’s workplace and residence would be deemed in the same vicinity. Under that reasoning, the same would apply for a Reserve soldier from Texas who is sent on orders for an unaccompanied tour to the Pentagon.

Anthony Jones, a Reserve pay specialist at Africa Command in Stuttgart, said the Army’s Human Resources Command is in error. “This is a classic case of HRC personnel misapplying the rule,” Jones stated in an email. “In order for the HOR (Home of Record) to be considered in the vicinity, the service member must commute daily.”

The vicinity rule generally applies to active duty soldiers, Jones said. For example, if an active duty soldier receives a permanent duty station order from Kaiserslautern to Grafenwöhr, but wants to maintain a household in Kaiserslautern, that soldier would be ineligible for a housing allowance there. A special waiver would be required to maintain two households. Since Reserve tours are typically unaccompanied, the vicinity rule shouldn’t apply in the same way, Jones said.

Nonetheless, activated Reserve soldiers in Germany now can no longer receive a housing allowance for their primary place of residence, abolishing a longstanding benefit, according to the Army’s interpretation of the vicinity rule.

In addition, the Army has issued debt notices to affected Reserve soldiers. The Army has delayed collection on those debts, and there is hope that blanket waivers will be granted, according to affected soldiers.

“At this time, no collections have occurred. The Army will approve or disapprove their request in accordance with Army Regulation 600-4 Remission or Cancellation of Indebtedness,” Lt. Col. Chevelle Thomas, a U.S. Human Resources Command spokeswoman, said in a written statement.

Still, there is great uncertainty.

“This would financially devastate my family,” said Col. John Lazaro, who was called up to active duty in 2008 from his home in Bamberg, Germany. Since then, he has been on assignment in Stuttgart. In March he was informed that he was no longer eligible to receive an allowance for his residence in Bamberg, 150 miles away, and weeks later received a $210,000 debt notification.

The move by the Army’s Human Resources Command at Fort Knox is the latest example of the military reinterpreting regulations in a way that strips benefits from overseas personnel, both uniformed and civilian.

While the scope of the Army’s decision to deny certain housing benefits to Reserve troops is not yet clear, it resembles the dispute between the Defense Department and some 700 overseas civilians, who also face the loss of their housing allowances as a result of a new government interpretation of regulations. That conflict, which has caught the attention of some U.S. lawmakers, continues as the workers demand new action by DOD to reinstate the lost benefits and erase debts across the board.

Lazaro is among the Reserve soldiers now waging a similar fight against the Army.

“I followed my orders to a T, and now I’m being held liable for a debt I didn’t incur,” Lazaro said. “What they’re doing is going back in time, changing rules, and breaking faith.”

Lazaro said he had already lost a chunk of housing allowance when the Army in 2012 informed him that he was not entitled to the Bamberg city rate he had been receiving because he lives in the suburb of Pettstadt, less than two miles from the Bamberg city limits.

In a Jan. 9 email to Lazaro, Maria de Troije, a manager at the Stuttgart finance office, disagreed with the Army’s decision.

“In doing the research for your location our organization paid you the Bamberg rate (DE229) because Pettstadt is located in the City of Bamberg,” de Troije said in the email. “If we currently had the same pay situation we would still pay it based on the Bamberg rate IAW (in accordance with) the regulation.”

Rather than accept the earlier Army decision, Lazaro said he filed an Inspector General complaint in the summer of 2012.

The Army acknowledged that the IG report spawned a deeper look at the housing allowance issue, which in turn resulted in the Army’s new awareness of the so-called vicinity rule.

“An Inspector General request for assistance was made by one of the service members found to be overpaid,” Thomas, the human resources spokeswoman, said in a written statement. “Ultimately, Army G-1 (human Resources) concluded the complainant was overpaid. This conclusion seemed to generate a closer look at others in similar circumstances, resulting in a determination that those Soldiers were also being overpaid.”

The Army said it found 10 soldiers affected in all, though the Army did not say whether it restricted its audit to only Germany-based reservists.

Lazaro was informed of the change in rules in a March email.

“Effective immediately, we have stopped paying these erroneous OHA [Overseas Housing Allowance] and OCONUS COLA entitlements to you. Due to a recent awareness of a portion within the JFTR (U1000 C) [Joint Federal Travel Regulation], we have determined that you have been overpaid,” wrote Gail Kaatz, a Reserve pay supervisor with Human Resources Command.

The “recent awareness” Kaatz was referring to dealt with the vicinity rule.

Lazaro was later billed $210,000, a debt he says he refuses to acknowledge.

“If this is allowed to go forward, what it means is they can go back and put other people in indebtedness,” Lazaro said. “Basically, any place you have a U.S. military presence, you’re going to have people affected.”

Since the Army’s decision to cut off his housing allowance, Nickens said he has been paying $2,500 per-month out of pocket to maintain his family residence in Kaiserslautern.

“It’s been hard, but I believe the regulations are on our side,” Nickens said. “I don’t know how this happened, but it needs to get fixed.”