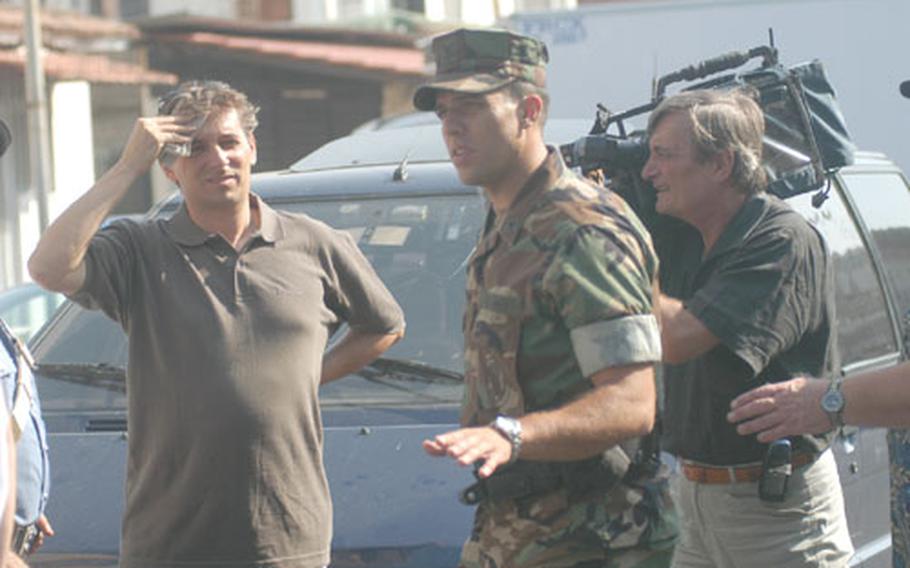 NAPLES, Italy — Sun-baked Italian kids gathered outside a butcher shop to watch the U.S. military police and carabinieri. Curiously observing the apparent car accident from across the street was a pudgy man clad only in a Speedo and fanny bag.

An inquisitive white-haired man pulled up on his bicycle and asked Petty Officer 3rd Class Jeff Schoff what all the excitement was about Thursday in a beachfront neighborhood near Naples.

Schoff smiled and explained that the fender bender was staged for the filming of a Navy recruiting video.

Naples is the only non-U.S. filming site for the video. It is being funded by the Naval Criminal Investigative Service to beef up the numbers of sailors in master-at-arms jobs, said Chief Petty Officer Stephen Kleintank, master-at-arms program manager at the NCIS headquarters in Washington, D.C.

The Navy recruiting command will get the six- to eight-minute video, which also will air on the American Forces Network to pique the interest of sailors unhappy with their careers.

“We want to show them why they should come to the Navy MA program,” said Kleintank, 35, from Flint, Mich.

The Navy also hopes to keep current MAs who are bored with monotonous gate-guarding from leaving the service. Masters-at-arms do patrols and guard gates as part of force protection.

A few years ago, there were about 2,000 MAs. By fiscal 2005, it will be the Navy’s third largest job classification, with just under 10,000 sailors, Kleintank said. The Navy only recently started allowing E-1s to join.

The Navy expects to lose several junior enlisted MAs who either never planned to stay in more than a few years, or who are bored with standing guard.

“We want to show that the job at the gate is the cornerstone of defense,” Kleintank said. “It’s monotonous, but very important. And if you stick around long enough, you can protect dignitaries or work with canines.”

Various segments of the Naval Media Center-produced video show sailors lifting fingerprints and a patrol boat coasting off Waikiki, Hawaii, as a nuclear-powered sub glides past.

For the Naples segment, sailors discuss their jobs. The video director staged a fender bender involving Italian and American drivers.

“We wanted to show something readily identifiable as being overseas,” Kleintank said.

Responding to the scene were two Naples MAs-turned-actors for the day: Petty Officer 2nd Class Michelle Rodriguez, 28, from Battle Creek, Mich., and Schoff, 28, a Naples native who spoke Italian with the carabinieri when they showed up. Petty Officer 3rd Class Brian Mingus, 20, a journalist from San Diego, played the part of the distraught driver.

The filming near a beach in Castelvolturno drew several spectators, including an elderly woman in a zebra-print skirt who strolled through the middle of the filming, muttering to herself about all the commotion.