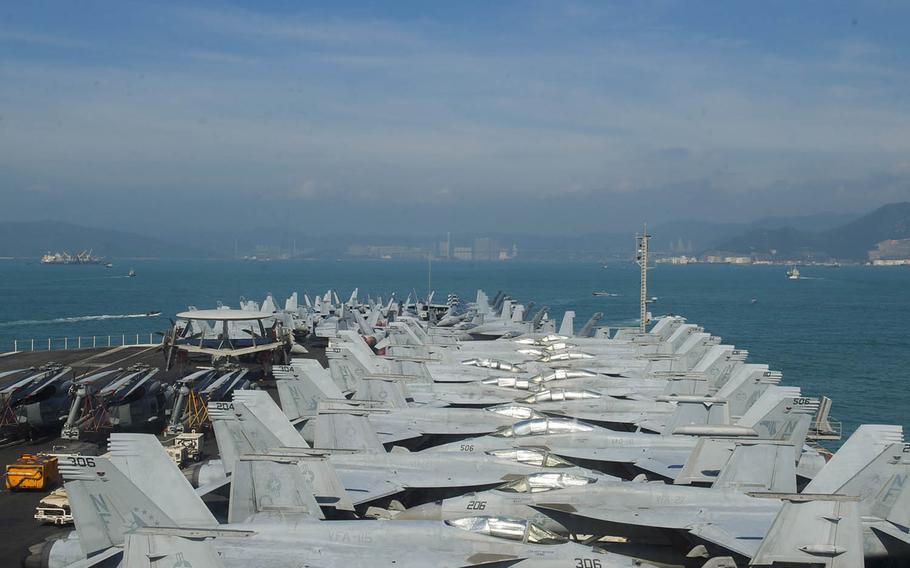 YOKOSUKA NAVAL BASE, Japan — The aircraft carrier USS Ronald Reagan and its battlegroup dropped anchor in Hong Kong on Wednesday, nearly two months after China denied a similar visit there by a U.S. warship.

The guided-missile destroyer USS Benfold is also part of the group, according to the Hong Kong Free Press.

“Hong Kong is always an incredible port visit and I’m glad that the officers and sailors of Carrier Strike Group 5 will have the chance to enjoy the culture, vitality and diversity of this great city,” Rear Adm. Karl Thomas, strike group commander, said in the statement.

The USS Wasp, an amphibious-assault ship based in Sasebo, Japan, was denied a stop in Hong Kong in late September, following growing trade disputes, new 10 percent tariffs on $200 billion of annual Chinese imports and the announced sale of U.S. military equipment to Taiwan.

China denied the Wasp port call a day after the tariffs took effect.

The U.S. also imposed sanctions once it learned China had purchased fighter jets and a surface-to-air missile system from Russia.

Despite that friction, the Yokosuka-based Ronald Reagan’s visit emphasizes efforts by the U.S. to improve its relations in the Indo-Pacific region, Thomas said.

“The abundant growth and prosperity that surrounds us in Hong Kong is what the United States Seventh Fleet seeks to preserve for all nations in this important region,” he said in the statement.

President Donald Trump and Chinese leader Xi Jinping are scheduled to meet next week at the Group of 20 summit in Argentina, the first time the two will have faced each other since trade tensions escalated.

The carriers brought 10 ships, about 150 aircraft and 12,600 personnel to maneuver and execute anti-submarine, surface and air warfare operations in the international waters, the Navy said.