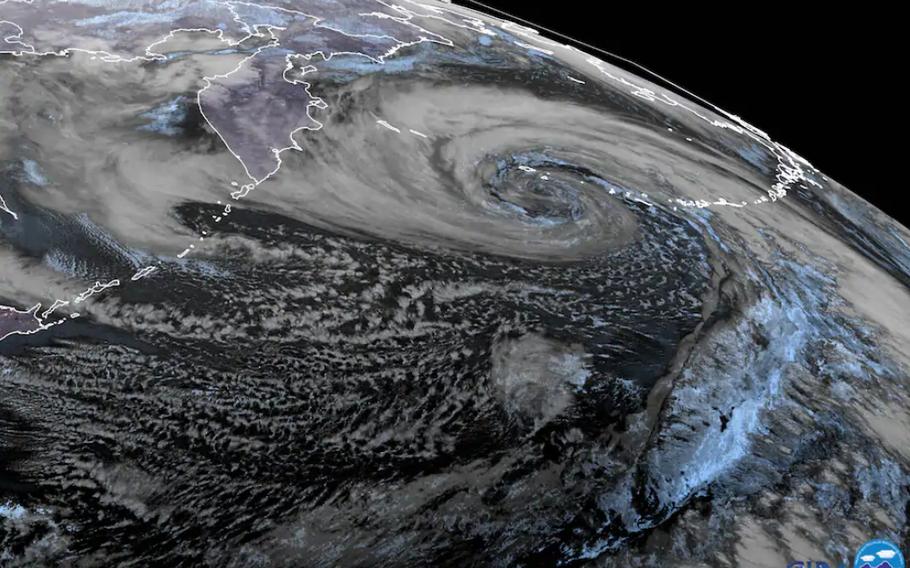 A satellite view of the powerful Pacific storm. (CIRA/RAMMB)

6:45 a.m. Thursday, Dec. 31, Alaska time: A weather phenomena called a “bomb cyclone” is being labeled one of the strongest storms ever recorded in the northern Pacific Ocean, has lashed Shemya Island in Alaska with 83-mph gusts and could bring “multiple feet” of snow to western Honshu, according to weather officials and a story by The Washington Post. It’s not a typhoon or anything tropical in nature. But the system, which is taking on the shape of a giant comma swirl of clouds, already qualifies as the strongest storm on record to hit Alaska, according to a climate scientist at the University of Alaska-Fairbanks. It’s similar in nature to extreme cyclones that formed in the same area in 2014 and 2015. The National Weather Service’s Ocean Prediction Center analyzed the cyclone at 921 millibars – equivalent to a Category 4 hurricane with winds exceeding 130 mph, according to the Dvorak Intensity Chart. The Center stated that the storm ranks as one of the strongest ever to impact the northern Pacific. The storm also is having its impact on western Japan and even as far south as Okinawa, a result of northerly winds funneling down from Mongolia and eastern China and Russia over the Sea of Japan, causing a massive “sea effect” snowstorm for the Japan Alps. Multiple feet of snow are forecast for the mountainous western regions of Japan’s main island of Honshu, which is recovering from up to 7 feet of snow earlier in December. Temperatures on Okinawa dropped from 74 to 52 degrees in less than 24 hours from Tuesday to Wednesday, with wind gusts as high as 53 mph recorded in Naha on Wednesday, according to local weather Web sites. Despite the period considered to be the northwest Pacific’s typhoon season having ended on Nov. 30, U.S. bases on Okinawa remain in seasonal Tropical Cyclone Condition of Readiness 4. According to Kadena Air Base’s 18th Wing Weather Flight officials, the command at Kadena, which speaks in one voice for the island regarding weather, isn’t ready to yet transition out of TCCOR 4. Storm Tracker will keep you updated.