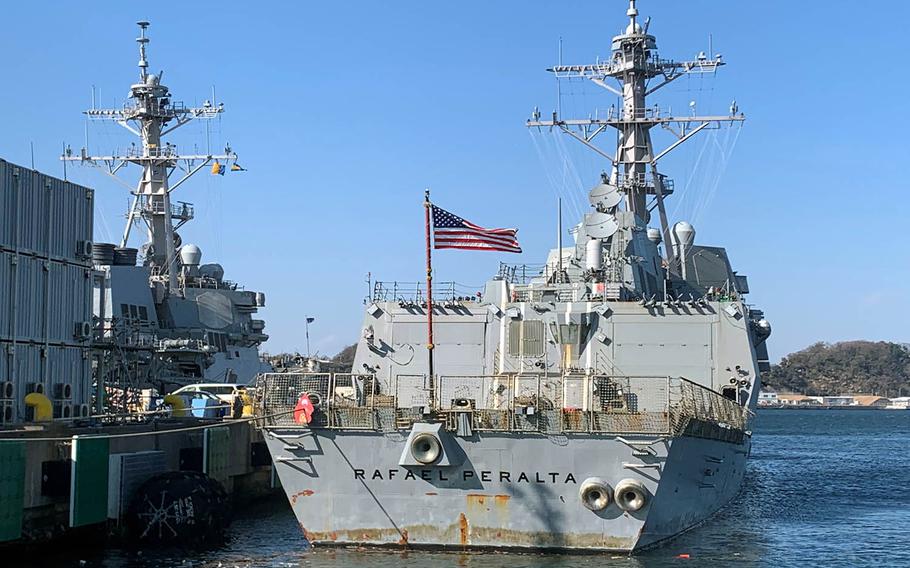 YOKOSUKA NAVAL BASE, Japan — The guided-missile destroyer USS Rafael Peralta arrived at its new homeport here Thursday, bringing with it some of the Navy’s most advanced capabilities, according to Naval Forces Japan.

Commissioned in San Diego in July 2017, the Rafael Peralta is one of the Navy’s newest destroyers and is outfitted with the Aegis Baseline 9 combat system. It can deploy with two MH-60 Seahawk helicopters and “has improved ballistic missile defense, anti-air and surface warfare capabilities,” according to a statement from Naval Forces Japan.

Moving the Rafael Peralta to Japan from San Diego aligns with a national defense strategy that places the most capable units in the Indo-Pacific region, according to the statement.

The Navy for years has been working to increase the fleet size in the military’s priority theater — even before the USS Fitzgerald moved from Yokosuka to Mississippi for repairs after its 2017 collision that killed seven sailors.

Then-Pacific Fleet commander Adm. Scott Swift in 2017 told Stars and Stripes he was “concerned about the number of ships that we have” in Yokosuka, which last gained a destroyer in May 2018 when the USS Milius shifted homeports from San Diego.

“Milius was coming out to help get us down to the [operations] tempo that we can really sustain,” Swift said at the time. “We’ve got such an incredible amount of work out here that I need Milius plus another ship to backfill behind Fitzgerald.”

Marine Sgt. Rafael Peralta, the new destroyer’s namesake, was posthumously awarded the Navy Cross after pulling an enemy grenade to his body during the 2004 Battle of Fallujah, “absorbing the brunt of the blast, saving the lives of fellow Marines that were only a few feet away,” according to the Naval History and Heritage Command website.

“[The] Rafael Peralta is one of the newest, most capable ships in the Navy,” Destroyer Squadron 15 commodore Capt. Steven DeMoss said in the statement. “With our security treaties and mutual defense treaties across the Indo-Pacific, it is imperative that we meet those requirements with the most capable platforms.

“Ships like Rafael Peralta demonstrate our commitment to regional security and enable our partners and allies to uphold the rule of law in the Indo-Pacific,” he added.