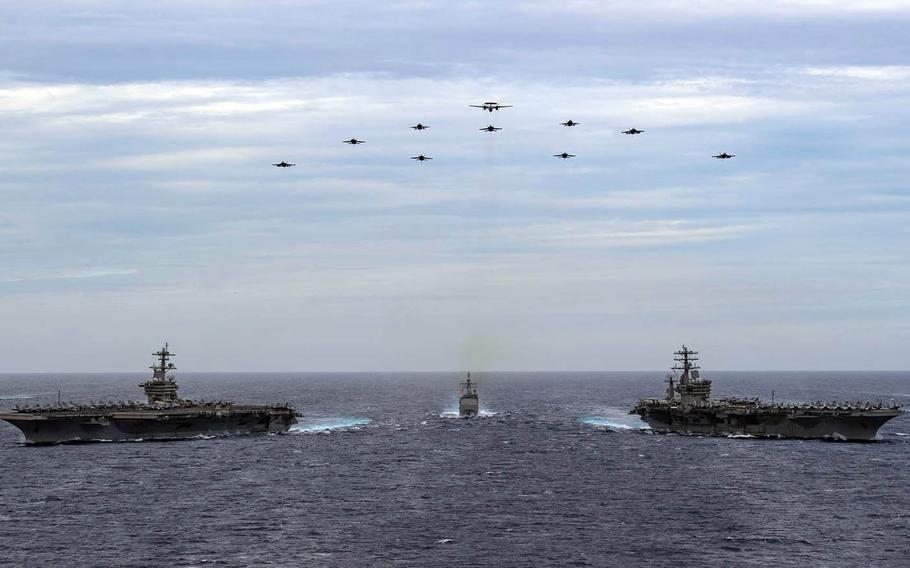 The aircraft carriers USS Nimitz and USS Theodore Roosevelt, along with ships and aircraft from their strike groups, stream through the South China Sea, Feb. 9, 2021. (Elliot Schaudt/U.S. Navy)

The commanders of two U.S. aircraft carrier strike groups in a conference call Wednesday dismissed Chinese critiques of their drills this week in the South China Sea.

Verissimo said the two-carrier rendezvous occurred more from convenience than any intent to provoke the Chinese, who lay claim to most of the area and object to U.S. naval presence there.

“The fact that we came together in the South China Sea was based on our navigation plan and making the most efficient route to and from our areas,” Verissimo said.

The Theodore Roosevelt patrolled the area while the Nimitz last week began its journey home to Bremerton, Wash., after an extended deployment in the Middle East. The Nimitz has been deployed for nearly 250 days.

Nimitz strike group commander Rear Adm. James Kirk said the dual-carrier operation was “not in response to any nation or event,” but meant to “improve our readiness levels in the region.”

China’s state-run Global Times newspaper on Wednesday claimed the exercise had “more symbolic and political meanings rather than military significance” given “the power of China’s anti-ship ballistic missiles.”

Verissimo dismissed the charge: “from my view at the tactical level, it’s not symbolic.”

“In the event of a war, U.S. carriers need to stay away from the region beyond the range of Chinese missiles,” Xu Guangyu, a senior adviser to the China Arms Control and Disarmament Association, was quoted as saying.

The strike groups were not concerned about China’s missiles, Kirk said during the call.

"We are always mindful of the capabilities of other militaries and we operate in a way that’s respectful of these capabilities, so I don’t think worrying is something we do,” he said.

“We do prepare for and are mindful of the different military capabilities out there to ensure that we can defend our forces should we be called upon to do that,” Kirk said.

The U.S. and China’s neighbors in the Western Pacific object to China militarizing islands and reefs in the South China Sea. Beijing claims about 90% of the sea as its territorial waters despite a 2016 international ruling to the contrary.

Verissimo said China’s military presence and capacity “has clearly increased” since his prior deployments to the region in 2017 and 2018.

“We’ve seen an expansion of their military capability; a larger number of aircraft, larger number of ships being utilized on a daily basis,” he said on the call. “I wouldn’t infer what their intent is … [but] the number of forces we see in all domains has increased significantly.”

In a press briefing Tuesday, Chinese Foreign Ministry spokesman Wang Wenbin accused the U.S. of sending its “vessels and aircraft to the South China Sea to flex its muscles,” according to a translated transcript.

Before the two-carrier exercise, the Navy sent the USS John S. McCain through the Taiwan Strait on Thursday and on a freedom-of-navigation patrol in the South China Sea on Friday.