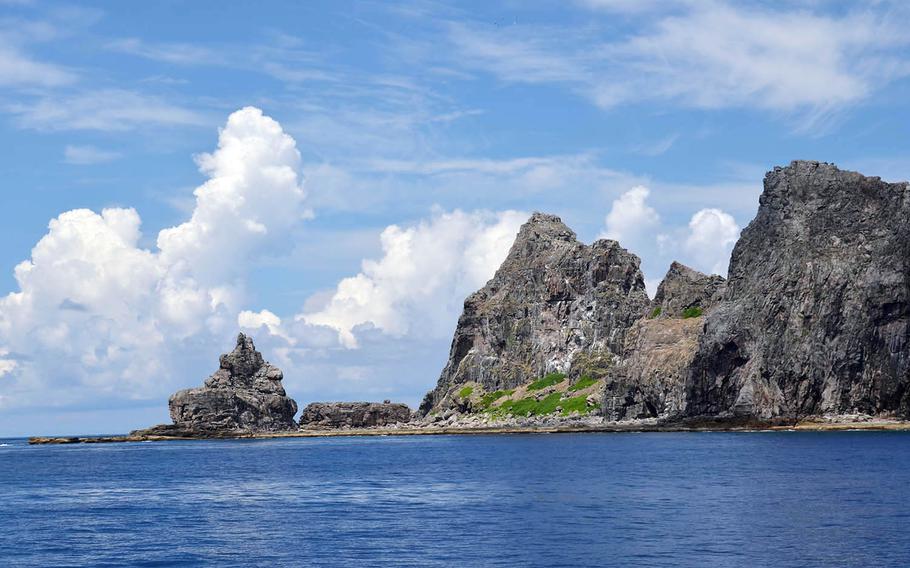 The Senkaku Islands in the East China Sea are administered by Japan but also claimed by China and Taiwan. (Cabinet Secretariat of Japan)

CAMP FOSTER, Okinawa — Chinese coast guard ships set a new annual record this week for the number of days they were spotted near islands controlled by Japan in the East China Sea.

The confirmation marks 58 consecutive days and 284 total that Chinese ships have spent in the area this year. The previous record was 282 days set last year, according to Japan’s Ministry of Defense website.

“It is very serious that Chinese naval vessels have been entering the territorial water and contiguous water around Senkaku Islands frequently,” Kato told reporters. “Japan will handle this situation firmly but calmly against China.”

“Senkaku is our land historically and internationally,” he said. “We will stay vigilant and protect our land.”

Japan administers the islands, whose surface area amounts to about 2 ½ square miles, but they are also claimed by China and Taiwan, which refer to them as Diaoyu Dao and Diaoyutai, respectively. The area surrounding the islands is said to contain a wealth of natural resources, including fish, oil and gas.

China’s Ministry of Foreign Affairs often comments in daily press conferences on Japanese protestations, but they had not yet addressed the issue this week. On Oct. 12, spokesman Lijian Zhao called the islands China’s “inherent territory.”

“Patrolling and carrying out law enforcement activities in the relevant waters are also China’s inherent right,” he said, according to a transcript on the ministry website. “The Japanese side should respect this.”

The U.S. has long declined to take a position on the islands’ sovereignty; however, Presidents Barack Obama and Donald Trump both have said they fall under the U.S.-Japan security alliance.

The commander of U.S. Forces Japan, Air Force Lt. Gen. Kevin Schneider, had stern words for China on Oct. 26 while showing off joint U.S.-Japan warfighting capabilities like the CV-22 Osprey with its fast troop movement and island insertion capabilities during the biennial Keen Sword exercise.

“Our arrival today was simply to demonstrate the ability to move a few people, but the same capability could be used to deploy combat troops to defend the Senkaku Islands or respond to other crisis and contingencies,” Schneider said shortly after touching down at the exercise in the special operations tiltrotor aircraft with Japan’s military chief Gen. Koji Yamazaki. He then chastised China for “malign activities” against its neighbors in the Western Pacific.