Marine’s daughter, 7, seriously injured after falling from escalator on Okinawa 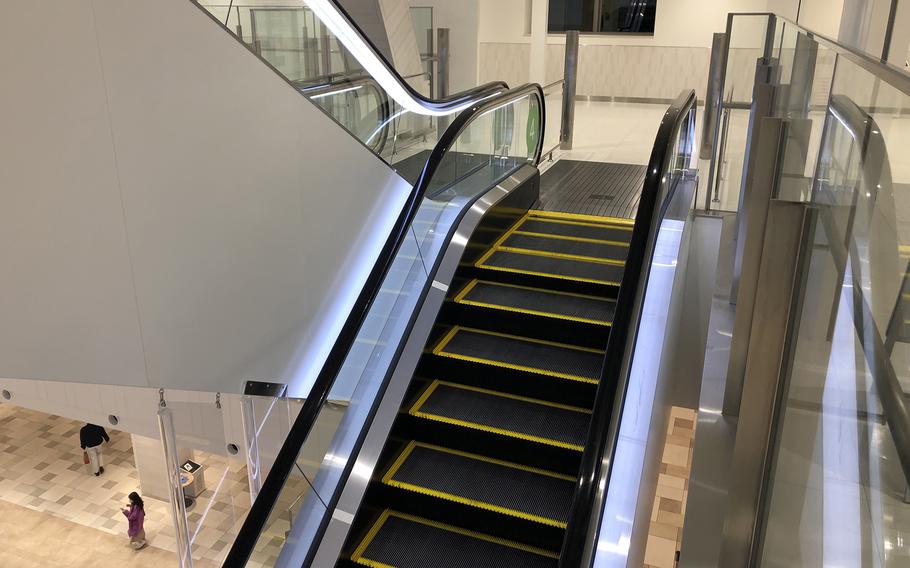 The daughter of an Okinawa-based Marine was seriously injured Saturday, Jan. 21, 2023, after falling through a gap on the righthand side of this escalator at a mall near Camp Kinser. (Keishi Koja/Stars and Stripes)

The accident happened around 12:50 p.m. Saturday at San-A Urasoe West Coast Parco City, an Urasoe Fire Department spokesman told Stars and Stripes on Monday. The unidentified girl fell from just below the fourth floor to first floor, he said.

The girl has a parent assigned to the 3rd Marine Logistics Group, which supports the III Marine Expeditionary Force and is headquartered at Kinser, group spokesman Capt. Johnny Coronel told Stars and Stripes by email Wednesday. He declined to name the girl or her Marine parent.

The girl was leaning on the railing of an ascending escalator when she lost her balance and fell through an 8-inch gap between the escalator and a wall, Japanese national broadcaster NHK reported Saturday.

The girl was unconscious and given CPR, according to the report.

She was bleeding from head injuries, the fire department spokesman said. It’s customary in Japan for some government officials to speak to reporters on condition of anonymity.

The girl was taken in critical condition to U.S. Naval Hospital Okinawa at Camp Foster, according to NHK. Hospital spokesman Trey Savitz referred questions Tuesday to the logistics group’s spokesman.

Coronel declined to provide the girl’s condition Wednesday but said she was “receiving proper medical treatment.”