Noriko Kawarai, right, receives a relic from the Battle of Iwo Jima that belonged to her uncle, Morihiro Murota, from Mayor Shin Sato at Kanuma City Hall, Dec. 20, 2022. (City of Kanuma)

CAMP FOSTER, Okinawa — A small wooden tablet that belonged to a Japanese soldier killed during the Battle of Iwo Jima was returned to his family in December thanks to the efforts of a Texas-based researcher.

Noriko Kawarai, 68, of Kanuma city near Nikko, took possession of the tablet, a shipping tag that bears a handwritten list of items that belonged to her uncle, Morihiro Murota, during a ceremony at Kanuma City Hall on Dec. 20, she told Stars and Stripes by phone Monday.

Murota was just 24 when he died defending the Japanese island stronghold during the last year of World War II.

The 7-inch by 3-inch tablet was retrieved from the island by U.S. Navy sailor Raymond Sexton and later donated to the Minnesota Military Museum, according to a Jan. 5 statement from Kanuma city. It was returned at the suggestion of war researcher and Iwo Jima Association of America volunteer, Daniel King, of Rockwall, Texas.

“I was really surprised,” Kawarai said. “I had seen on TV that those kinds of things happen, but I never thought that it would happen to me.”

The Battle of Iwo Jima began with a Marine amphibious assault on Feb. 19, 1945, following months of aerial and naval bombardment. Seventy-thousand Marines took part in the 36-day battle, with more than 6,800 killed and 19,000 wounded. On the Japanese side, about 18,000 were killed. Only 216 Japanese were captured alive.

The well-preserved piece of wood is addressed to Apprentice Officer Morihiro Murota from his father, Toshiichi Murota, and includes a list of items like books, medicine and pencils that were included in the original package, according to the statement. Murota was assigned to the 311th Independent Infantry Battalion at the time of his death.

Sexton, then a 21-year-old Seabee with the 106th Construction Battalion, was building integral infrastructure on the island when he collected the tag as a wartime souvenir, the statement said. He brought it home, where it remained for more than 75 years.

Sexton’s son donated the tablet to the museum after his father was hospitalized due to “old age,” the statement said. Raymond Sexton is now age 98, King wrote in a Jan. 13 Facebook post. This wooden tablet and black sand from Iwo Jima were gifted to Noriko Kawarai, niece of fallen Japanese soldier Morihiro Murota, at the city hall in Kanuma, Japan, Dec. 20, 2022. (City of Kanuma) 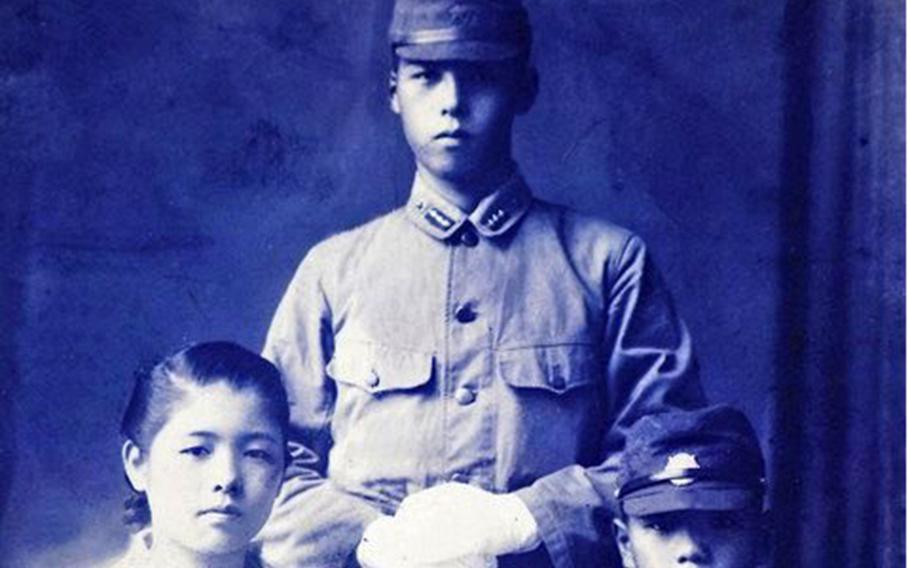 Morihiro Murota, center, standing, poses with his younger sister, Mitsuko, left, prior to shipping out to Iwo Jima during World War II. (Facebook)

King, author of “A Tomb Called Iwo Jima: Firsthand Accounts from Japanese Survivors,” suggested returning the tablet to Murota’s family after seeing it in a Facebook post by museum curator Doug Thompson, the statement said. He sent a letter to Kanuma city officials in August, aided by retired Kyoto-based real estate executive Nobuhiro Nakamura. It took them only a few weeks to track down Kawarai.

Kawarai officially received the tablet and several vials of black volcanic sand from Iwo Jima’s beach from Kanuma Mayor Shin Sato on Dec. 20, she said. Seeing the piece of wood was heartbreaking, she recalled.

“I knew about the war but after having the wooden plate in my hands I could have a real feeling,” she said.

Kawarai’s mother, Mitsuko, who was Murota’s younger sister, died in October at 96, Kawarai said. She was devastated by her brother’s death and traveled to Iwo Jima about 20 years ago to try, unsuccessfully, to look for his remains.

She never learned about the wooden tablet’s existence due to dementia, Kawarai said.

Kawarai placed the relic next to the memorial tablet on her mother's altar at home, she said. She plans to show it to another of Murota’s surviving siblings, though he, too, suffers from dementia, and then possibly donate it to a museum.