As champion of force-on-force training with US Marines, Japanese colonel paid ‘political’ price 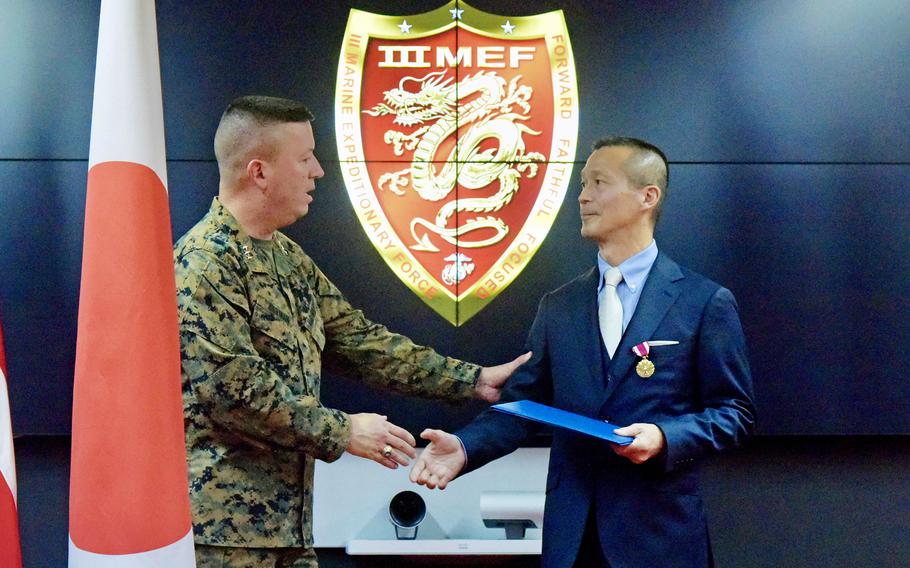 CAMP COURTNEY, Okinawa – A decision to train Japanese troops with U.S. Marines in force-on-force exercises near Mount Fuji may have cost a Japanese colonel his career.

Col. Rikiya Kondo, who retired from the Japan Ground Self-Defense Force in May after two years as commander of the Fuji Training Center, received the Meritorious Service Medal on Jan. 6. The award honors outstanding achievement or meritorious service to the United States in a noncombat setting.

“Col. Kondo showed vision; he showed courage,” Lt. Gen. James Bierman, commander of the III Marine Expeditionary Force, told an audience of about 60 people at the ceremony. “He was a leader who was unimpressed and unsatisfied with the status quo and in the process of seizing opportunities and being willing to stick his neck out, he set conditions that made all of us better.” 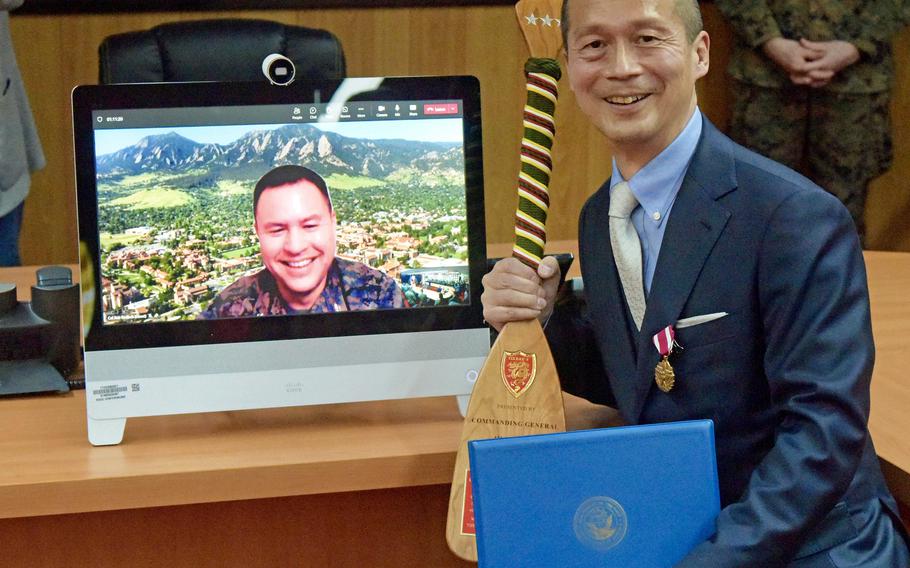 Bodisch’s two-year tenure as Camp Fuji’s commander coincided with Kondo’s on the Japanese side. The two quickly established “an unprecedented professional and personal relationship” that led to plans for the combined exercise, Bodisch said.

The U.S. is a treaty ally of Japan, bound to come to its defense. The two engage regularly in military exercises; however, Shinka was the first time they went head-to-head, according to a Jan. 6 report by III MEF spokeswoman Sgt. Savannah Mesimer.

These two officers, both new to the area and serving in similar roles, sought each other out to see how they could increase combat training for both Japanese and Marine combat units, Bodisch wrote.

“Col. Kondo is a very colorful character," he said. “He is a student of Japanese military history and enjoys relating to the most famous Samurai Warrior of the Mount Fuji area – Takeda Shingen.”

The Marines at Camp Fuji had never trained with their counterparts at five surrounding Ground Self-Defense Force garrisons before the Shinka exercise in 2021, Bodisch wrote. A second, monthlong exercise was held in March.

Shinka, which translates to “infinitely improving,” paired two Marine infantry companies against a Japanese mechanized battalion, according to the Marine Corps and Indo-Pacific Command. The exercise allowed both sides to flex their muscles in a multidomain setting, Bodisch said.

Shinka proved valuable for both militaries in many areas, Bodisch wrote, and helped hone them as stand-in forces ready to fight on key island terrain. The stand-in force concept is a part of Marine Commandant Gen. David Berger’s Force Design 2030 doctrine.

But a year later, just after the second Shinka exercise, Kondo retired. During the award ceremony at III MEF headquarters, Kondo said his enthusiasm for bilateral training had hit a political ceiling.

“My activities were not welcomed by Japanese headquarters, but I believe this force-on-force exercise is tremendously required for the Japanese military and U.S. Marine Corps and these current circumstances, especially, look at China and Russia,” he said. “We need realistic training.”

He described the Ground Self-Defense Force headquarters as “too bureaucratic.” Despite having to retire, Kondo is ready to return and fight “against aggression from crazy countries,” he said during the ceremony.

A spokesman from Japan's Ministry of Defense declined to comment on Thursday. Neither the Fuji Training Center nor the Ground Self-Defense Force have responded to requests for comment.

“What makes this exceptional is that there's political risk baked into the constitution for Japan for bilateral training,” Tracy said during the ceremony. “Not only is there a face or professional risk associated with what Col. Kondo proposed and carried forward, but there was also a real political risk for his entire organization, and he shouldered that on his back probably to his own professional detriment to make his organization and our organization better and that's one of the things we're holding up today.”

Kondo stood nearby with his wife, Naoko, as Bodisch listened in via video conference call from Boulder, Colo., his new duty station, as the award citation was read aloud and Bierman pinned the medal to Kondo’s blazer.

He declared Kondo an honorary member of III MEF and presented him with a decorated paddle that represents “a tool for forward progress,” the general said.

“The is a great, great honor for me,” Kondo told the crowd after receiving the award. “Very surprising.”