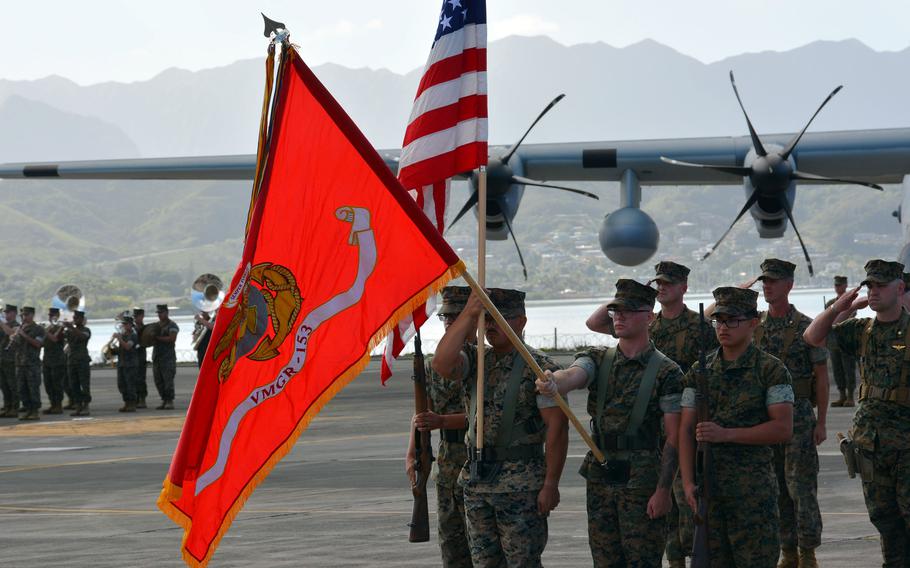 MARINE CORPS BASE HAWAII, Hawaii — The Marine Corps has activated a cargo plane squadron in Hawaii that is one part of the service’s move to design a force capable of outmaneuvering any adversary.

With a pair of KC-130J Super Hercules planes as a backdrop, the colors for Marine Aerial Refueler Transport Squadron 153 were uncased on Friday during a ceremony at Marine Corps Base Hawaii.

The squadron traces its lineage to the opening months of World War II and some of the Corps’ most notable battles in the Pacific. It had been deactivated since 1959.

The squadron, whose pair of KC-130s are expected to reach their total of 15 by fiscal year 2026, will be used to transport troops and refuel the base’s two squadrons of tiltrotor MV-22 Ospreys.

“Today is a unique day – what a picture behind me,” Brig. Gen. George Rowell, assistant wing commander of 1st Marine Aircraft Wing, told the audience as he motioned to the planes. “What a picturesque view of the evolution of the Marine Corps.”

He described the planes and the crew members assembled on the field as “a very tangible, very visual manifestation of Force Design 2030 and of the evolution in the Marine Corps.” 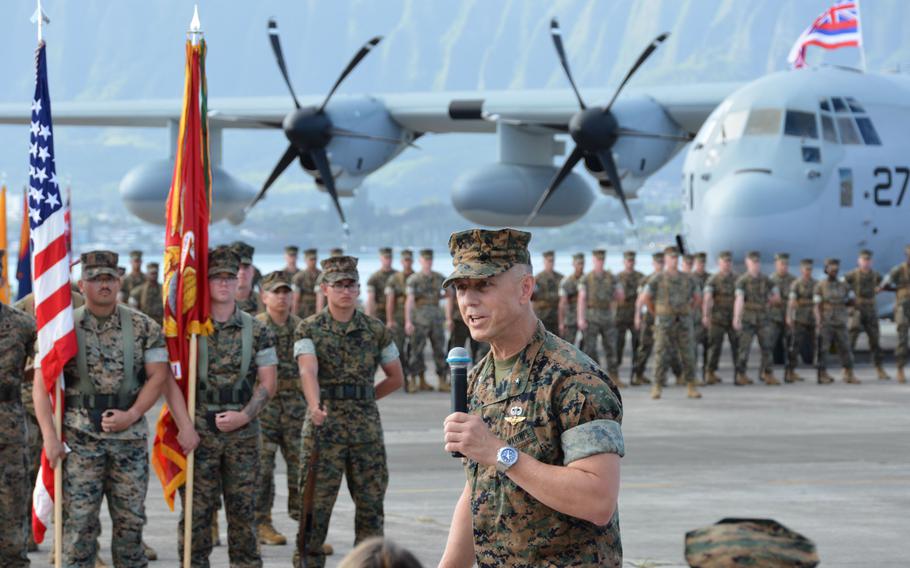 Force Design 2030 is a service-wide restructuring aimed at creating an agile force more adept at fighting in the kinds of contested maritime spaces that would be central in a conflict with China.

The Hawaii base has divested itself of a pair of helicopter squadrons and a reconnaissance drone squadron as part of the redesign. They are being replaced by the refueling squadron and a squadron of six MQ-9 Reaper drones.

The reconfiguration will require upgrades to the air station’s hangars, including the World War II-era Hangar 103 that will be replaced with one that can handle the Ospreys’ maintenance requirements.

Construction is expected to take place between fiscal years 2025 and 2027, 1st Lt. Mark McDonough, a spokesman for Marine Corps Base Hawaii, said in an email Friday.

“The design of this new hangar will incorporate historic design elements consistent with those found on hangars built here during World War II,” he said.

Given the lineage of the squadron, WWII history was ever present in remarks made by speakers at the ceremony. Rowell said the squadron was “born, raised, matured and combat tested” during campaigns in the Solomon Islands, New Georgia, Bougainville and Okinawa.”

Comparing World War II and global events of today, Col. Manlee Harrington, commander of Marine Aircraft Group 24, said “the threat of war, the threat of conflict, is always there.”

“The nature of war is unchanging because human nature is unchanging,” he said. “There's always going to be someone out there who’s willing to kill, coerce, intimidate, for their own gain. And although the nature of war doesn't change – it’s enduring – the character of war does, and the aircraft behind me, and the stand-up of this unit in Hawaii represents our response to that changing character of war. We had to make changes to meet the developing threat, and we've done that.” 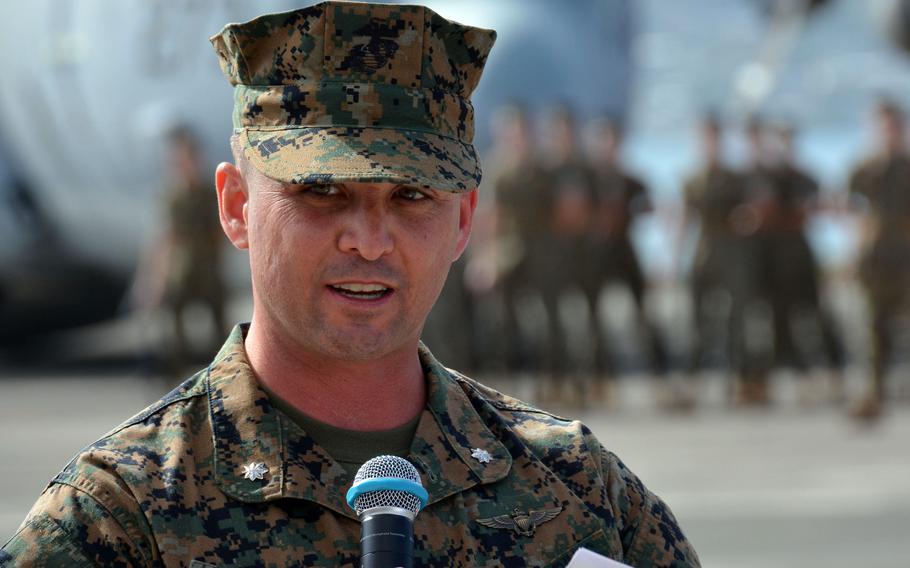 “Change is difficult and necessary to maintain a ready and relevant force,” he said, noting the deactivation of Marine Aerial Refueler Transport Squadron 452 at Stewart Air National Guard Base in Newburgh, N.Y., last month to reconstitute it in Hawaii.

But Force Design 2030 “identified a need for additional lift and fueling capacity in [U.S. Indo-Pacific Command] in order for the Marine Corps and the joint force to outmaneuver our adversaries,” Myers said.

“We must innovate, evolve, and most importantly, be prepared and must always be faithful to our lineage and ready to deter and defeat our peer enemies,” he said.