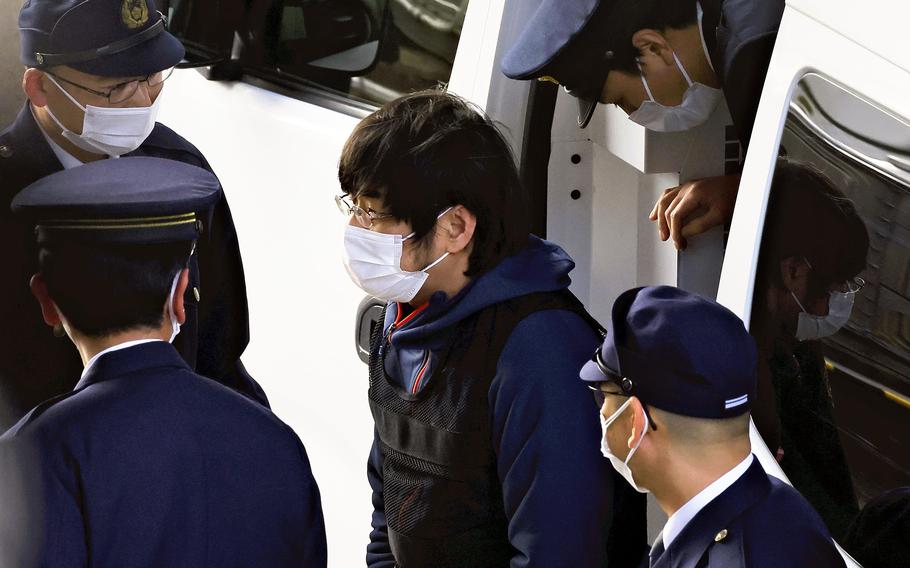 Tetsuya Yamagami is transferred to the Nara Nishi Police Station in Nara following the end of his psychiatric evaluation on Tuesday. (The Yomiuri Shimbun)

The suspect in the shooting death of former Prime Minister Shinzo Abe said he was "fed up" being repeatedly asked the same questions by a medical specialist while being held for psychiatric evaluation, according to sources.

On Tuesday, the Nara District Public Prosecutors Office completed its about 170-day evaluation of Tetsuya Yamagami, 42, to determine his mental fitness to stand trial.

According to Yamagami's 77-year-old uncle, many people other than relatives have sent his nephew books, clothing and cash totaling more than 1 million yen. Yamagami reportedly holds a number of qualifications, including a certificate in real-estate transactions. Some people have sent him study materials for Grade 1 of the Eiken Test in Practical English Proficiency and an English-Japanese dictionary.

His uncle recommended through another relative that Yamagami obtain the top-level Eiken certification. "It'll likely be a long way off, but I hope he studies and makes use of [the qualification] in the future," the uncle said. "I don't want to talk about how I feel about the case, but I hope the court makes a proper decision based on the facts."

Yamagami's psychiatric evaluation detention, which began July 25, was initially scheduled to last until Nov. 29. At first, medical specialists interviewed him about once a week. However, after the evaluation deadline was rescheduled for Jan. 10, the interviews were increased to about twice a week from mid-November.

During questioning following his arrest on July 8, Yamagami was quoted by the Nara prefectural police as saying he had a grudge against the Unification Church, to which his mother had made large donations. During interviews with a medical specialist, he was repeatedly questioned about the church — officially known as the Family Federation for World Peace and Unification — and at one point told visiting relatives he was "fed up" being asked the same questions over and over.

While being held for evaluation, Yamagami was only allowed to meet with a limited number of relatives and lawyers. Recently, he reportedly had started to share more details about what he was thinking and feeling at the time of the shooting. During his evaluation at the Osaka Detention House, he pored over newspapers and magazines reporting on the case and showed interest in the government's moves on issues related to the Unification Church, the sources said.

According to Yamagami's lawyer, the district court's decision said that "the disadvantage caused to the suspect due to extending the detention period should be taken into consideration," but also that "a considerable period of time was necessary to accurately learn about the suspect's upbringing and living conditions."

The prosecutors again requested an extension in December and the summary court extended the period by about two weeks. However, this decision was annulled by the district court following an appeal by Yamagami's lawyer.

Ken Takaoka of the Gifu Prefectural Kibogaoka Children's Medical and Welfare Center, a psychiatrist with extensive experience in psychiatric evaluation who specializes in psychopathology, said, "From what I've seen and heard in the media, [Yamagami] weighs things carefully and has excellent understanding." On the subject of Yamagami being bored by the same questions, he said, "Medical specialists often repeatedly ask about important points on different days to confirm whether [a suspect] gives the same answer."

Regarding Yamagami's 5½-month psychiatric detention, Takaoka said, "This is a high-profile case that is attracting a lot of attention from society, and the specialist probably quizzed Yamagami carefully about his family environment and how he grew up to discern whether he had a mental disorder and the impact that such factors may have on the case."