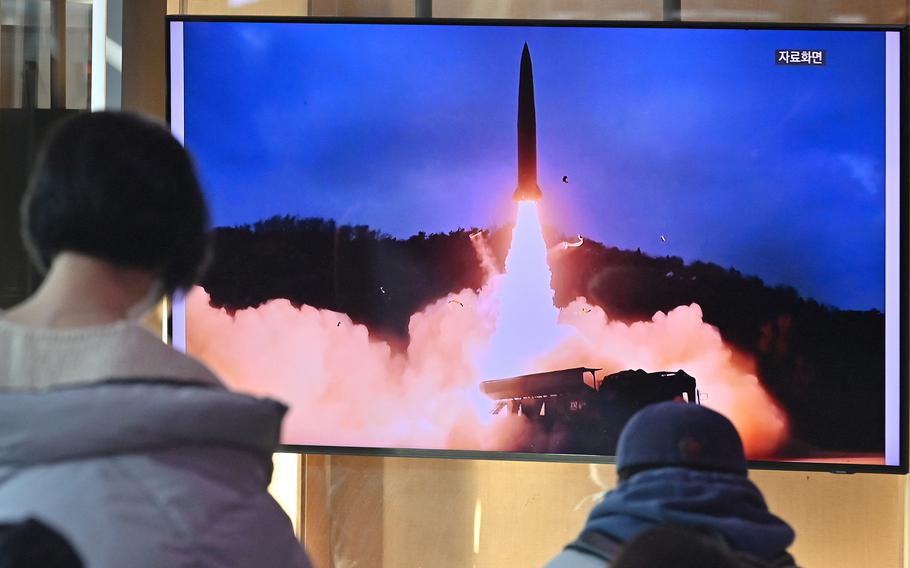 People watch a television screen showing a news broadcast with file footage of a North Korean missile test, at a railway station in Seoul on Jan. 30, 2022, after North Korea fired a "suspected ballistic missile" in the country's seventh weapons test this month according to the South's military. (JUNG YEON-JE/AFP/TNS)

(Tribune News Service) — Kim Jong Un rang in the new year the way he likes best — with a fresh threat to dramatically expand North Korea's nuclear arsenal. This one is almost certain to fizzle.

Kim used a speech published on Jan. 1 to call for an "exponential increase" in the country's stockpiles of atomic weapons, implying output at an unprecedented pace. The North Korean leader also called for the mass production of so-called tactical nuclear weapons that could be used on the battlefield against U.S. forces and their allies.

While Kim has repeatedly surprised his doubters with the expansion of his missile program, his heavily sanctioned state appears to lack the domestic capacity to quickly double, triple or quadruple his production of weapons-grade uranium and plutonium. At best, he could hope to ratchet up his output of fissile material, which non-proliferation experts estimate could be used to arm about a half-dozen bombs each year.

"We do not know what Kim Jong Un actually means with the 'exponential increase' in the production of fissile material, but in the nuclear industry, such an increase normally takes place gradually," said Olli Heinonen, a distinguished fellow with the Stimson Center think tank in Washington.

United Nations sanctions bar North Korea from importing a large array of components needed to quickly ramp up production. Without outside supplies, Kim's regime must rely on a limited production network that includes an aging nuclear plant for making plutonium and a uranium-enrichment facility at its crown jewel Yongbyon nuclear site.

Proliferation experts believe there's a second suspected uranium-enrichment facility near Pyongyang and U.N. agencies say there are two uranium mines and a pair of uranium-concentration plants supplying the system.

"We're guessing about a lot. But the bits we know and have evidence for are signs they could be ramping up," said George William Herbert, an adjunct professor at the Middlebury Institute of International Studies. "Underground centrifuge plants are particularly hard to detect or destroy," he said, adding there is a possibility of doubling the production rate.

All told, experts believe that's enough to produce about six to eight nuclear bombs annually, although much depends on the configuration of warheads and the level of production loss during the enrichment process. Estimates for North Korea's total stockpile of warheads range from 20 by the Stockholm International Peace Research Institute, to 40-50 from the Arms Control Association to more than 100 in a Rand Corp. analysis.

Of course, even one atomic bomb in Kim's possession is unacceptable to the U.S., which has a long-stated goal of the "complete denuclearization" of the Korean Peninsula. But a lack of warheads does undermine the practical value of Kim's increasingly wide array of nuclear-capable missiles, which experts have said likely tally more than 1,000.

One way for North Korea to boost its nuclear stockpile is to ramp up production of lower-yield tactical weapons that require less fissile material. It could also try to further develop its own centrifuges and other required machinery, said Heinonen, who has served as the deputy director general of the International Atomic Energy Agency, the U.N.'s nuclear watchdog.

"Technology they have used successfully in the missile program, if applied to centrifuge rotors, may increase your capacity by 50% without requiring any additional space," Heinonen said. They could just replace old centrifuges gradually with more advanced ones, he added.

Satellite imagery from 2021 indicated the uranium-enrichment plant at the Yongbyon nuclear complex had been expanded. Weapons expert Jeffrey Lewis wrote on his Arms Control Wonk website last year that this probably indicated North Korea planned to increase production there by as much as 25%.

Lewis said in a recent email that he suspects, "after 20 years, North Korea can probably manufacture its own centrifuge components just as Iran does — but they've never shown us that infrastructure."

North Korea's nuclear program is shrouded in secrecy, with foreign experts forced to rely on satellite imagery and state media reports to assess its production capacity. The IAEA hasn't been able to access Yongbyon or any other location in North Korea since April 2009 and the country hasn't let in Western nuclear experts at all since Kim took power more than a decade ago.

"They don't need to rely on imports as they have their own equipment to produce fissile materials independently," said Sangmin Lee, director of the North Korean Military Research Division at the Korea Institute for Defense Analyses based in Seoul.

The U.S. and South Korea have warned that Kim is likely preparing for his first test of a nuclear bomb since 2017, as he seeks to demonstrate his ability to develop smaller tactical weapons. For now, Kim has rebuffed calls for talks by U.S. President Joe Biden and South Korean leader Yoon Suk Yeol, declaring in a September speech that he would "never give up" his nuclear weapons.

"The door to negotiations, as the North Koreans put it last fall, is closed," said Soo Kim, a specialist on North Korea who previously worked at the Central Intelligence Agency.

"Kim Jong Un's justification, of course, lies in the hostile policies of the U.S. and South Korea — a long-used pretext to substantiate the DPRK's pursuit of its own hostile policy and path of nuclearization," she said, referring to North Korea by its formal name.