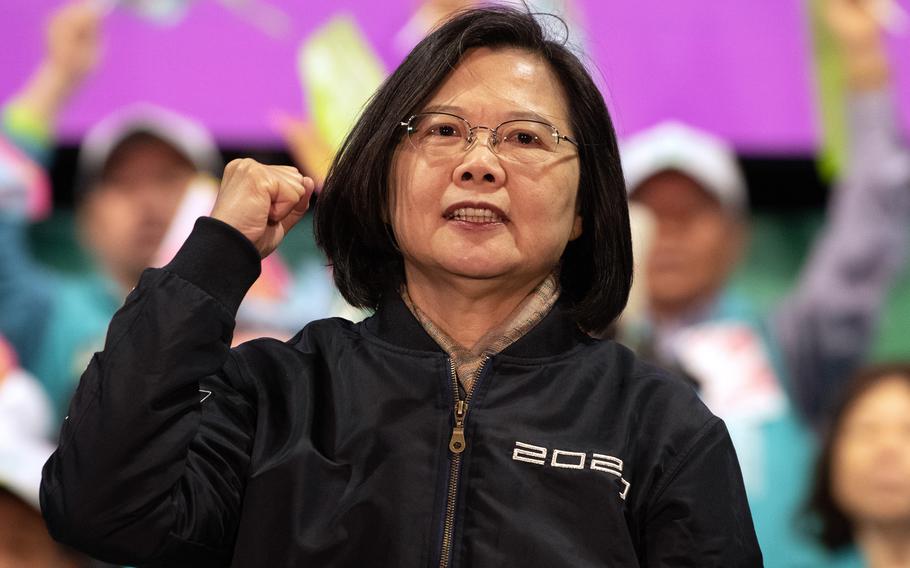 Taiwan President Tsai Ing-wen said at a press briefing Tuesday that Taiwan is extending its compulsory military service to one year from the current four months. (Carl Court, Getty Images/TNS)

(Tribune News Service) — Taiwan announced it is extending its compulsory military service to one year from the current four months, a signal to Beijing and Washington it is serious about defending itself.

President Tsai Ing-wen said at a press briefing Tuesday in Taipei that the change coming in 2024 was necessary to ensure international support and that China’s expansionism threatened regional stability.

“This was an extremely difficult decision, but it is unavoidable for Taiwan’s survival,” she said, speaking alongside Premier Su Tseng-chang, Defense Minister Chiu Kuo-cheng and other top officials. “As long as Taiwan is strong enough, Taiwan will not become a battlefield.”

Taiwan’s government is working with the U.S. — its main military backer — to fortify its defenses against the possibility of an invasion by China, which claims the island as part of its territory. Last week, U.S. lawmakers passed a $1.7 trillion spending bill that included $2 billion in weapons funding for Taiwan.

The spending pledge prompted China to put on its biggest display of military might since it held unprecedented exercises around the island following House Speaker Nancy Pelosi’s visit in August. Some 71 Chinese warplanes flew near the island to start this week, including 47 that made incursions across either the median line of the Taiwan Strait or into Taiwan’s southwest air-defense identification zone.

Smaller sorties like those happen on an almost daily basis, allowing the People’s Liberation Army to probe Taiwan’s defenses and place strain on Taiwan’s much smaller military. The Defense Ministry in Taipei said Tuesday it spotted six more Chinese warplanes and three naval vessels, tracking them with its own planes, ships and missile systems.

The move to extend military service is largely popular in Taiwan, with 68% of the public in favor, according to a poll by TVBS, a major broadcaster in Taipei. It is also in line with calls from former US. Secretary of Defense Mark Esper, who urged Taiwan to take the step in a visit in July.

Tsai also said Tuesday the government will boost the pay of conscripts during their year, giving them a monthly salary of NT$26,000 ($845). That move is aimed at making the requirement more palatable for young men given the figure had been around NT$6,500, less than a quarter what minimum wage would provide.

Expanding service time would allow the armed forces to bolster their ranks during a transition to an all-volunteer force of about 175,000 personnel supported by reservists and civil defense volunteers, according to a 2021 US Department of Defense report.

Other highlights from the wide-ranging press conference Tsai held:

• Taiwan talked to Washington about delays in weapon shipments and the U.S. has recently made improvements.