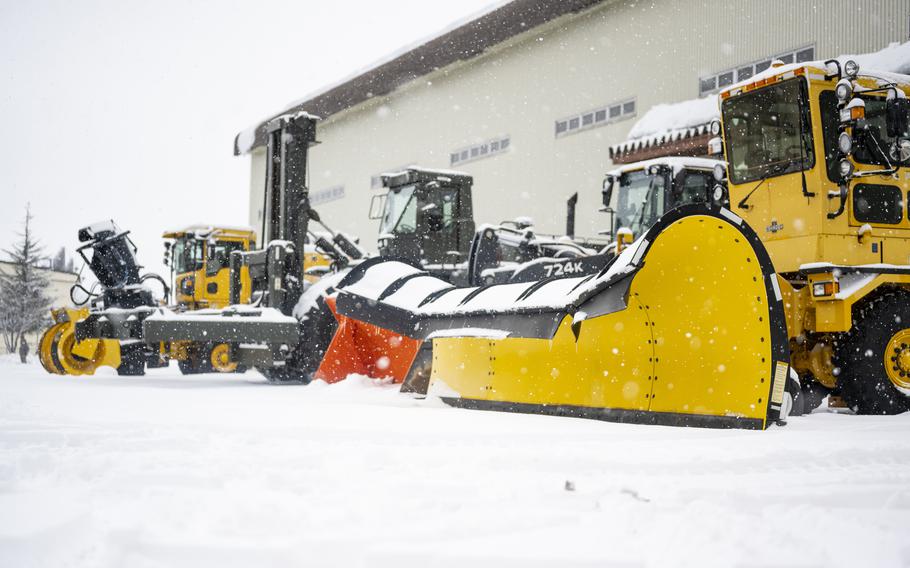 Heavy machinery positioned outside of vehicle operations at Misawa Air Base, Japan, Jan. 20, 2022, is ready to move snow as fast as it falls on one of the snowiest places on Earth. (Antwain Hanks/U.S. Air Force)

More snow is on the way for the northernmost reaches of Japan, just as the same region recovers from a blizzard that resulted in 17 deaths in the past 11 days.

Winter storms hit Japan’s west coast and the northern island of Hokkaido over the Christmas break with some areas receiving almost three feet of snow in 24 hours and thousands of homes suffering power outages, according to local reports.

The heavy snow accumulation closed highways on Dec. 19. Railways were also affected, with the Yamagata Shinkansen train line halting service in some places, according to The Mainchi newspaper that day.

The Japan Meteorological Agency has warned people in areas hit by the blizzard to limit travel after motorists were trapped in their cars by snow.

The one-week forecast from the agency on Tuesday calls for more snow at Sapporo and Asahikawa on Hokkaido, Japan’s northernmost island, and in Aomori prefecture from Wednesday until Jan. 3, with a break on Saturday.

Aomori prefecture at the northeast tip of Honshu, the largest of Japan’s four main islands, regularly finds itself swept by blizzards. Aomori city claims to be one of the world’s snowiest cities, where as much as 21 feet will fall between November and April, according to a CNN report in February 2019.

By comparison, Buffalo, N.Y., one of the snowiest cities in the United States, in the previous winter shoveled away 99 inches, or 8 ¼ feet, according to the Golden Snow Globe website.

In northern Japan, cold Siberian winds come in November from the northwest, gathering moisture as they cross the Sea of Japan, rising as they collide with the coastal mountains and depositing their burden of snow.

The fatalities from the most recent blizzard included a man who fell from a roof while clearing snow and a woman who succumbed in her car to suspected carbon monoxide poisoning, public broadcaster NHK reported Friday.

Misawa Air Base in Aomori prefecture, home of the 35th Fighter Wing, has yet this season to feel taxed by heavy snowfall, base spokesman Lt. Col. Cody Chiles told Stars and Stripes by email Tuesday.

“The temperatures at Misawa AB are projected to decrease this week, and we are prepared to continue base operations while simultaneously managing large volumes of snowfall throughout the winter season,” he said.

The 35th Civil Engineer Squadron snow and ice control team and the 35th Fighter Wing Command Post work with the Misawa community to provide information and safety notifications about winter weather, he said.