This year, US military families count holiday blessings at home 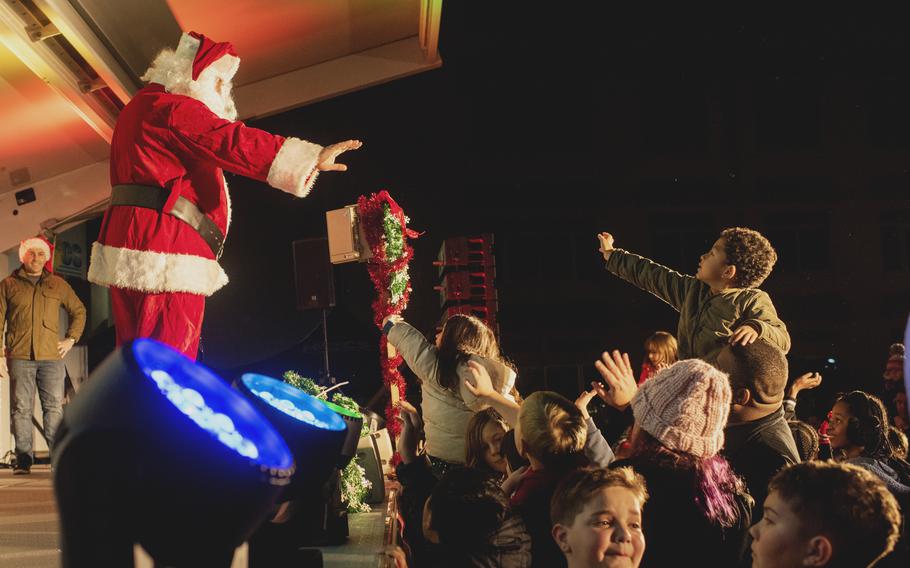 Christmas, Hanukkah, Kwanzaa or just “the holidays” are tinged with memories of absence for many military families.

But this year, with the worst of the COVID-19 pandemic over and America’s military no longer involved in the post-9/11 conflicts that kept it occupied for 20 years in Iraq and Afghanistan, more service members are spending the final days of December with their families.

“I missed Christmas, it was tough, I’m admittedly a family man,” Tombes said. “She did a good job keeping me included in pretty much everything.”

Tombes’ unit had a huge cookout to celebrate the 2019 holiday season together, he said. 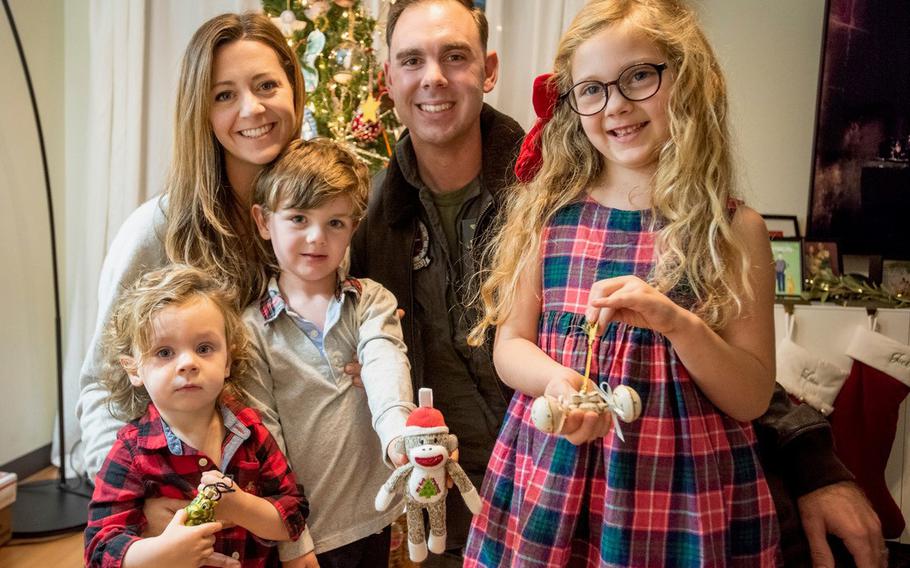 The Tombes children show some of the Christmas tree ornaments they received as part of a family tradition each year. From left, Liam, Ashley, Jack, Thomas and Abigail photographed at their home at Marine Corps Air Station Iwakuni, Japan, on Dec. 14, 2022. (Jonathan Snyder/Stars and Stripes) 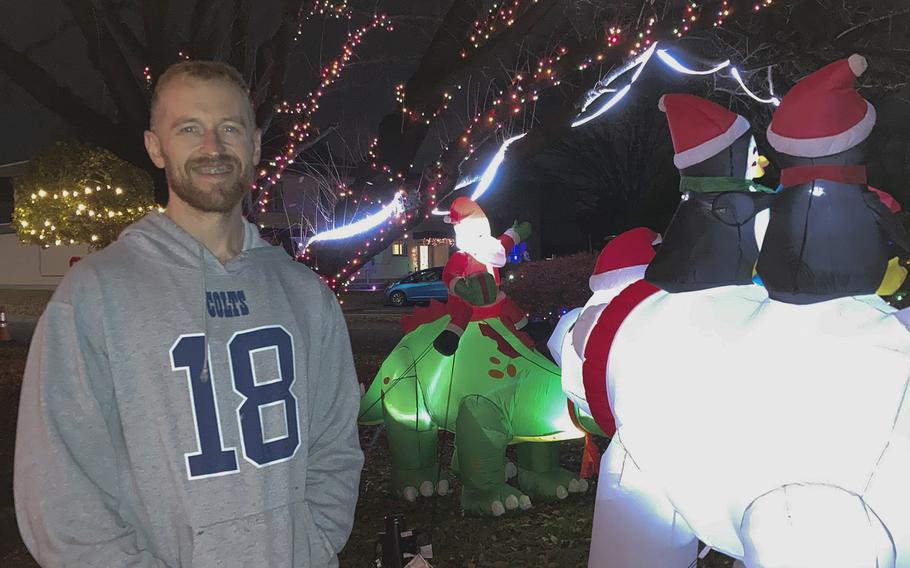 Ashley Tombes had given her husband a Christmas story book that wove their children’s names into the stories.

“I was able to read it to them over FaceTime, which was pretty special,” Thomas said.

His wife said their family doesn’t take for granted the fact he’s with them for Christmas.

“Even when he is not deployed there are training exercises and things,” Ashley said. “He had missed holidays in the past before, so we are thankful he is home.”

Cmdr. Loretta Stein, a doctor at Naval Support Activity Naples in Italy, hasn’t been home for Hanukkah in more than 10 years.

But that doesn’t mean Stein and her husband, Josh Green, spend the annual eight-day celebration, also known as the Festival of Lights, without family.

No matter where Stein has been assigned, including Japan, she has sought out other Jewish people and worked to offer opportunities, such as shabbat dinners or Hanukkah parties, that strengthen the Jewish community and make people feel at home.

“It gives me a sense of belonging, warmth and joy to see people together and creating new memories that are not about not being home, but creating a new home,” Stein said.

This year, the couple will observe Hanukkah with a traditional lighting of the menorah, songs and games, and eating of potato pancakes, or latkes, served with Green’s homemade applesauce.

The gathering will include members of their Jewish community, or family, some of whom may not have anyone else to celebrate with or be familiar with the minor Jewish holiday that commemorates the rededication of the Temple in Jerusalem in the second century BC.

“It is an opportunity for celebration,” said Green, who along with Stein, is a Jewish lay leader at NSA Naples. “So, we try to make sure we touch on all of it (festivities) so anyone that is within our community has something they can connect with.” 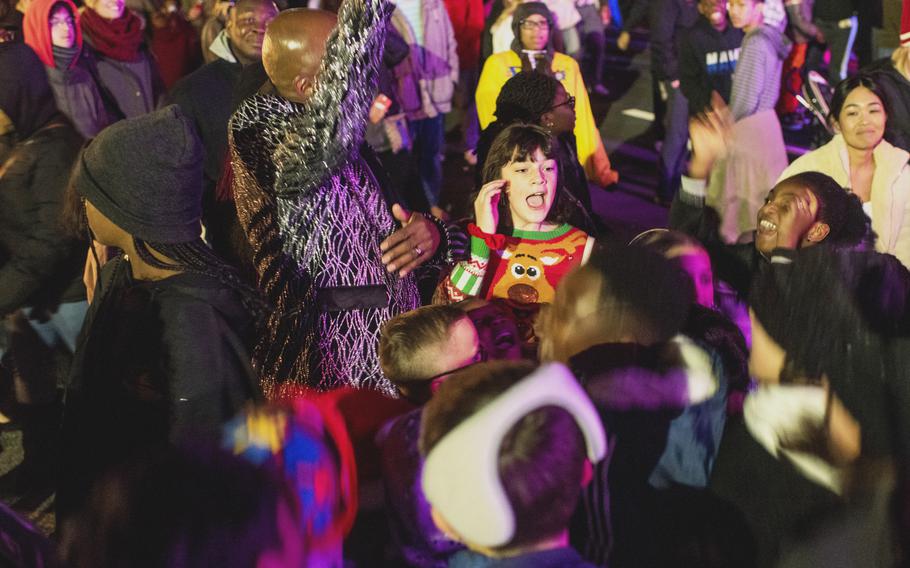 The residents of Marine Corps Air Station Iwakuni, Japan, turned out for a tree lighting event on Dec. 3, 2022. (Jonathan Snyder/Stars and Stripes)

At Yokota Air Base in western Tokyo, Air Force Tech. Sgt. Brandon Newman, from New Castle, Ind., remembers the virtual Christmas he observed during a 2013 deployment to Kuwait. He phoned his wife, Michelle Newman, and their children over a sketchy internet connection.

“You know back then we had Skype,” he said. “I called back (home) on Christmas Day and watched them open up some presents; they watched me open up some gifts they sent me and exchange pleasantries.”

Now living in the Yokota East Side housing area, he decorates his home with abandon, stringing lights on the house and posting inflatable figures on the lawn.

“Back in the States I just always like decorating and putting up Christmas lights,” Newman said. “My thing is decorating the outside, my wife’s decorating the inside, so just kind of a tradition we kept from being stateside to bring it over here.”

Not far from the Newmans’ home, Coast Guard Lt. Cmdr. Irving Cintron, 43, from Puerto Rico, goes all out too on Christmas lights, a la Clark Griswold.

He lines his building with heavy-duty lights and with permission from his neighbors coordinates a sound-and-light show featuring 10 to 15 minutes of Christmas music each evening. His production is in its second season.

The Cintrons’ post the show on Facebook with an invitation to the base community to come and see firsthand.

“When he put it out on Facebook people were really happy to see that something was happening for Christmas,” Cintron’s wife, Dailys, told Stars and Stripes.